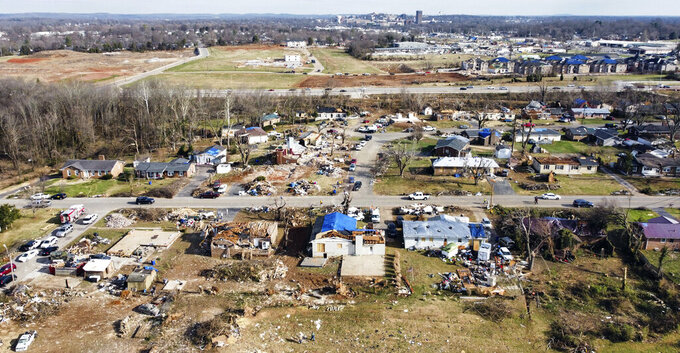 Residents, organizations and volunteers clear belongings and debris from homes destroyed in the Creekwood subdivision by the Dec. 11 tornadoes on Hillridge Court in Bowling Green, Ky., Wednesday, Dec. 15, 2021. More than 30 tornadoes tore through Kentucky and seven other states, killing multiple people. Thousands of residents have lost their houses or are without power. (Grace Ramey/Daily News via AP)

FLORHAM PARK, N.J. (AP) — George Fant hopped in his car and headed to work early last Saturday morning, unaware of the heartbreak unfolding in his hometown.

When the New York Jets left tackle arrived at the team's facility, quarterback Mike White asked him a question that stopped him in his tracks.

Fant was born and raised in Bowling Green, Kentucky, and still calls the city home. He owns a house there and his parents live there, as do many family members and friends. He played basketball and football at Western Kentucky — where White was a teammate — the same place he met his wife Chastity Gooch, also a basketball player.

So when he found out about the deadly tornadoes that ripped through the area beginning last Friday night and saw the agonizing photos and videos of the aftermath, Fant immediately grew worried.

“Oh, man, it was really nerve wracking,” Fant said in a telephone interview with The Associated Press. “As soon as I saw the pictures, my stomach dropped. I didn't know what to do.”

He began feverishly calling and texting his family and friends, hoping to hear they were OK.

“I had a few family members who had the tornado come through and destroy their homes,” Fant said. “But everybody ended up actually being safe on my side of the family, so that was the best thing.”

Fant knew, however, many others weren't so fortunate.

At least 90 have been confirmed dead across multiple states after more than 40 tornadoes pummeled a wide area. Officials said 76 died in Kentucky alone, including seven from one family in Bowling Green.

Fant, who's listed as doubtful to play Sunday at Miami with a knee injury, has otherwise been a bright spot during the Jets' 3-10 season. After beginning the year at right tackle, he has seamlessly filled in for injured left tackle Mekhi Becton while garnering some Pro Bowl buzz.

“He’s just been so consistent and he’s gotten better every week,” coach Robert Saleh said. “He’s every bit of deserving of any accolade he does get and really excited to work with him moving forward.”

While Fant has been focused on football and getting his knee healthy this week, he has felt an overwhelming urge to help his hometown from afar — at least until the football season ends in a few weeks and he can head back to Bowling Green.

He and his wife began brainstorming, deciding to use the Fant Foundation they founded together as a starting point. They got in touch with the Red Cross, the school county and the mayor's office to see what they could do.

“We're just trying to kind of help heal the area,” Fant said. “I'm just trying to use my platform and use who I am to better the city and help the city. There's areas of the city that'll never be the same."

The Fant Foundation is collecting donations through its various social media platforms, with 100% of the proceeds going to families in the Bowling Green area to help pay for funeral expenses for those who lost family members in the storms; down payments for housing; gift cards; clothing; supplies; and toiletries.

“I just want to kind of play my role and do what I can do,” Fant said. “That city helped raise me. There are people there that took care of me as a kid and they didn’t have to. So this is an opportunity for myself and my family and my foundation to show how much they mean to us and what we can do to help.”

The Fant Foundation held a charity event with Saks Fifth Avenue last week in New York to raise funds for Fant's youth football camps, financial literacy programs and other charitable endeavors. After the tornadoes rolled through Kentucky shortly after, Fant decided to take the money raised at that event and put it toward the relief efforts.

Several of Fant's Jets teammates have donated and Fant said his foundation had raised $20,000 in just over two days since seeking help through posts on Twitter and Instagram.

“It definitely puts everything in perspective,” Fant said. "Whenever people lose lives and really when it's kids who are injured or lose their lives to something that's a natural disaster like that, it's honestly just one of those rude awakenings that anything can happen at any time to anybody.

“You never want to see anything like this happen, but all we can do is just comfort the families, help the families out as much as we can and just become closer as a community and help each other out. You've just got to live every day as much as you can because you never know what can happen and when.”