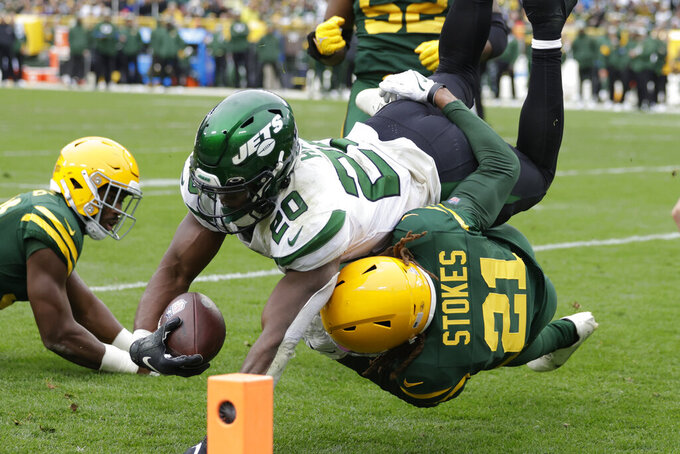 The Jets and Jaguars announced the trade for the running back Tuesday with New York sending Jacksonville a conditional late-round draft pick.

The pick is a sixth-rounder that can become a fifth-rounder, according to a person familiar with the deal. The person spoke to The Associated Press on condition of anonymity because the specific terms were not announced by the teams.

The Jets moved quickly to replace Hall, who tore the ACL in his left knee in New York's 16-9 win at Denver on Sunday. Hall was placed on season-ending injured reserve, as was offensive lineman Alijah Vera-Tucker, who was also injured in the game against the Broncos.

Robinson has 81 carries for 340 yards and three touchdowns this season to go along with nine catches for 46 yards and a score. He totaled 1,837 yards rushing, 566 yards receiving and 18 total TDs in his first two years with Jacksonville. He topped 1,000 yards on the ground as a rookie after being undrafted out of Illinois State.

But Robinson played just 12 snaps and didn’t record a carry in a 23-17 loss to the New York Giants on Sunday.

“The Jacksonville Jaguars are grateful to have had James Robinson as a member of this organization and thank him for his many contributions on the field, in the locker room and in the community during what were three impactful seasons in Jacksonville,” the team said in a statement. “We wish James well in New York as he continues his career with the Jets.”

Robinson will combine with Michael Carter, a fourth-round pick last year out of North Carolina, to help the Jets maintain the 1-2 dual-threat punch out of the backfield they had with Carter and Hall.

Hall, a second-round pick out of Iowa State, had a team-leading 463 yards rushing and four touchdowns, and also caught 19 passes for 218 yards and a score.