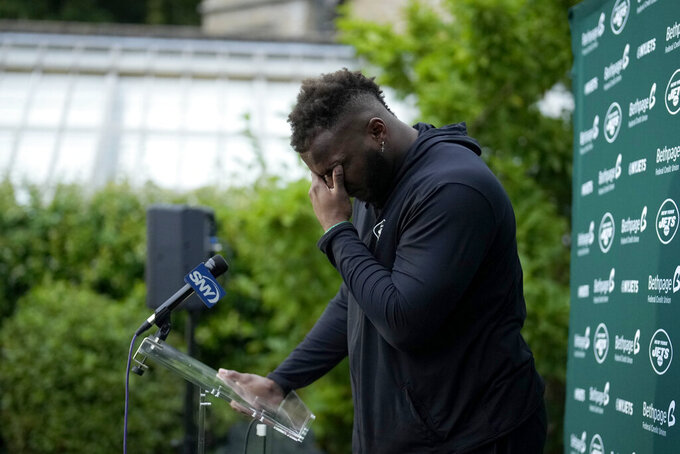 New York Jets' defensive lineman John Franklin-Myers is overcome with emotion as he speaks about signing his new contract during a press conference after an NFL practice session at Hanbury Manor Marriott Hotel and Country Club near the town of Ware in south east England, Friday, Oct. 8, 2021. The New York Jets are preparing for an NFL regular season game against the Atlanta Falcons in London on Sunday. (AP Photo/Matt Dunham)

WARE, England (AP) — The New York Jets rewarded defensive end John Franklin-Myers with a four-year contract extension. He just wishes his young son was there to share the big news with him.

Franklin-Myers immediately wanted to speak to 2-year-old Kyler after signing the deal that will keep him with the Jets through the 2025 season.

“He didn’t get a chance to be there, but I just wanted to talk to him,” Franklin-Myers said at a press conference Friday at the team hotel outside London.

Franklin-Myers, who was cut by the Los Angeles Rams before the 2019 season, then paused, bowed his head and shed some tears.

“I play football for him,” the 25-year-old Franklin-Myers said, pausing again. “I just wanted to give him every opportunity.”

The team announced the signing Friday ahead of their game against the Atlanta Falcons on Sunday. A person with direct knowledge of the deal told The Associated Press that the contract is worth up to $55 million. The person spoke to the AP on condition of anonymity because the team didn't announce terms.

Earlier in his comments, he said there was no thought given to becoming a free agent after the season. He was in the final year of his rookie contract, and the Jets will now keep him as an important piece of their defensive line.

“With this coaching staff and the guys that they give me an opportunity to play with, I think I won't be in a better position anywhere,” he said. “The defense — it suits me perfectly playing inside and outside. So there was no question once we got the numbers right, and mutual interest there, there was no question about it.”

After being cast off by the Rams, Franklin-Myers said he's indebted to the Jets.

“The Jets gave me an opportunity and I'm eternally grateful for that, and I owe them,” he said.

“He hasn’t even scratched the surface of where we think he can go within the system,” Saleh said of Franklin-Myers, whom he likened to San Francisco 49ers defensive end Arik Armstead.

He has already tied his single-season high with three sacks in the Jets’ first four games, ranking second to only Quinnen Williams with 3 1/2. Franklin-Myers also has six quarterback hits, four tackles for loss and a forced fumble.

“He has done nothing but work, work, work,” Saleh added. "He's been a tremendous leader. Those are the guys we want to pay. JFM is deserving of it and we couldn't be happier to have it done."

Franklin-Myers was drafted in the fourth round by the Rams in 2018 out of Stephen F. Austin. He played in every game as a rookie and got a strip-sack of New England's Tom Brady in the Super Bowl that season.

But Franklin-Myers was waived during the Rams' final roster cuts the next summer. The Jets claimed him off waivers, and he spent most of the 2019 season on injured reserve.

He broke through last season with New York as a versatile part of the defensive line, and showing a consistent ability to put pressure on the quarterback.

“He deserves it, 1,000 percent,” Williams said of Franklin-Myers. “Great guy, man. Great person on the field and off the field. Got a work ethic like no other.”