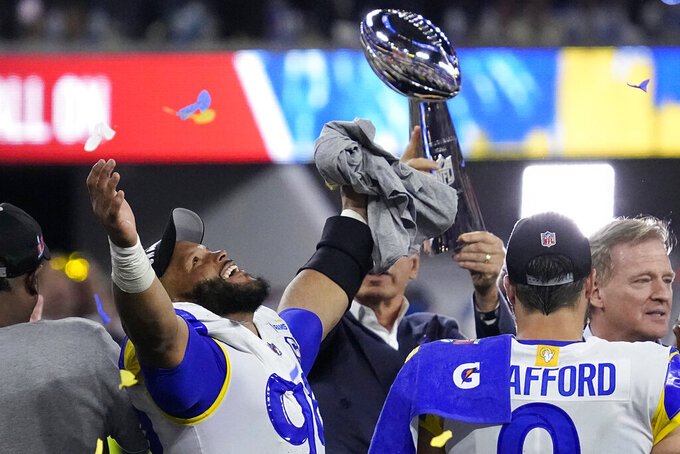 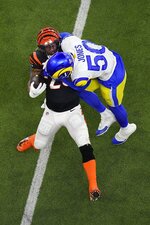 INGLEWOOD, Calif. (AP) — Their defense laying siege to the Bengals, the Rams needed something — anything — from their slumbering offense.

How about a precise 79-yard drive to the Lombardi Trophy?

It wasn’t a classic march, aided by three successive Bengals penalties and mired by some bad throws. No matter: When Cooper Kupp caught a 1-yard pass from Matthew Stafford with 1:25 remaining, LA’s offense indeed had awakened just in time for a 23-20 Super Bowl victory Sunday.

“That’s hard work, that’s hours together,” Stafford said. “I just thank coach (Sean McVay) for putting it ... ‘Hey, Matthew, you and Coop go get this thing done.’ He kept calling plays for him, kept finding ways to get him the ball. He made unbelievable plays; that’s what he does.”

What Los Angeles did on that drive finally measured up to what its defense was doing most of the night: overwhelming Cincinnati's blockers, sacking Joe Burrow a Super Bowl record-tying seven times. The pressure, led by Aaron Donald and Von Miller, was nonstop.

“You got to be relentless," said Donald, who added a crowning achievement to his certain Hall of Fame career. "You want something bad enough you’ve got to go get it. You know it was right in front of us ... all offseason you work, you train, you got camp, you got a long season just for this one game. You know we the last team standing.”

Standing in a venue built for champions, with the Rams (16-5) earning their first NFL title since the 1999 season — and their first representing Los Angeles since 1951.

They did so in their home, the $5 billion SoFi Stadium, making the Rams the second consecutive host to win the championship after Tampa Bay became the first a year ago.

“As far as building this stadium,” said Rams owner Stan Kroenke, the man who moved them back from St. Louis in 2016, “I think it turned out all right.”

The winning series, during which game MVP Kupp’s 4-yard touchdown reception was negated by offsetting penalties, ended soon after with the NFL Offensive Player of the Year easily beating Eli Apple in the right corner of the end zone for the winning score.

Kupp had four receptions for 39 yards, and a 7-yard run on fourth-and-1 from the Rams 30 on the championship drive.

Cincinnati (13-8) was penalized the second-fewest times (72) for the fewest yards (620) in the regular season but flags hurt badly — including pass interference on Kupp in the end zone.

“I’ve said it all year, whatever is asked of me whatever my job is gonna be, I just want to execute to the best of my abilities," said Kupp, who won the triple crown of receiving in 2021, leading in catches, yards and touchdowns. “I trust as the game goes on I’ll have opportunities as well, and I just want to stay ready for those things stay locked in.”

As locked in as that pass rush.

Fittingly, Burrow was under pressure on fourth-and-1 and threw incomplete, setting off a football fiesta this city has not seen since the LA Raiders won the 1983 championship.

A tearful Donald said after the game, “I wanted it so bad. I dreamed this.”

Ten points because of two plays in a span of 22 seconds at the outset of the third quarter put Cincinnati ahead for the first time.

Tee Higgins’ 75-yard score made it 17-13 and was followed one play later by Chidobe Awuzie’s pick. Evan McPherson tied Adam Vinatieri’s postseason record with his 14th field goal, a 38-yarder. The rookie didn't miss in the postseason.

Higgins beat All-Pro cornerback Jalen Ramsey on the first play of the second half — the receiver clearly tugged Ramsey’s face mask on the play. After Stafford was intercepted on the next play, the Bengals got McPherson’s field goal.

They tried to hold on as all of southwest Ohio held its breath.

“I was disappointed in my performance overall,” said Burrow, the NFL Comeback Player of the Year who was 22 of 33 for 263 yards and a touchdown. That’s going to propel us into next year ... we’re not satisfied with what we did this year.”

Not after the 15-play march in which Kupp also converted a fourth down with his run.

“We wanted to be in attack mode and pressure them as much as possible,” Bengals coach Zac Taylor said. “Sometimes it worked, sometimes it didn’t.”

Kupp even earned the MVP honor despite often being double-teamed after fellow wideout Odell Beckham Jr. — who had a touchdown catch on Los Angeles' second drive for the game's first score — went out with a knee injury in the second period. Kupp finished with eight receptions for 92 yards.

One fear for Rams followers was ill-advised throws by Stafford, and he had two. His deep pass moving left was picked in the end zone late in the first half by Jessie Bates III. On his second interception, rookie Ben Skowronek could only deflect it —directly to Awuzie.

Other than Matt Gay's 41-yard field goal later in the third quarter, it was all defense until the Rams' decisive drive.

Energized from the outset, the crowd of 70,048 at the stadium that opened in 2020 roared to introductions of each team by The Rock. Then the Bengals fans, far louder than their Rams counterparts early on, got to rocking when Trey Hendrickson sacked Stafford, leading to a punt.

LA’s defense responded by holding on third and fourth downs with a yard to go at midfield. Ernest Jones knocked down a pass for Ja’Marr Chase to turn over the ball, and the excellent field position set up the first touchdown.

Beckham, who joined the Rams in Week 10 after being exiled from Cleveland, easily beat Mike Hilton on a corner pattern for the 17-yard score. Then Beckham showed off his moonwalk in the end zone.

Kupp’s first touch was a short throw from Stafford he turned into a 20-yard gain when Bates III fanned on a tackle. That would not be the last whiff by the Bengals, and it cost them mightily at the end.

The most intriguing matchup, Offensive Rookie of the Year receiver Chase against All-Pro Ramsey, got real juicy late in the opening quarter. Chase brilliantly tracked Burrow’s throw and made a one-handed grab over Ramsey for a 46-yard gain to the LA 11. The drive went no further and McPherson made a 29-yarder.

Beckham took advantage of two defenders colliding to pick up 35 yards on the next drive, Darrell Henderson got 25 while covered by Hendrickson dropping back — huh? — and Kupp was wide open in the right corner of the end zone for his 11-yard score.

“It just comes down to this team and the way we prepared, they way we loved on each other, trusted each other,” Kupp said.

As has been their wont when behind in the playoffs, though, the Bengals responded with a 75-yard drive capped by the trickery of Joe Mixon. He was so efficient running that the secondary was sucked in when Burrow handed off, and Mixon lobbed a 6-yard TD pass to Higgins.

It remained 13-10 until halftime, with Beckham’s left knee injury most notable; he had to be helped off the field and didn’t return.

Thanks greatly to Kupp, though, the Rams finished it off.

“We always talk about there’s something special about being a part of something bigger than yourself," McVay said. "These guys play for one another.”