The Latest: Buffalo's Pegula into 1st Slam QF at Australian 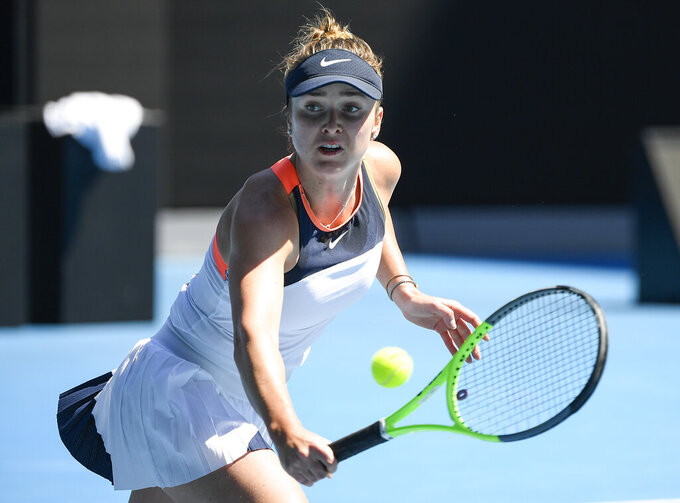 MELBOURNE, Australia (AP) — The Latest on the Australian Open (all times local):

Jessica Pegula has reached her first Grand Slam quarterfinal at the Australian Open by earning her first victory over an opponent ranked in the Top 10.

The 61st-ranked American, whose parents own Buffalo’s NFL and NHL franchises, beat No. 5 seed Elina Svitolina of Ukraine 6-4, 3-6, 6-3 in Rod Laver Arena.

Pegula is a 25-year-old who has won four matches at Melbourne Park over the past week after entering the tournament with a total of three Grand Slam match wins for her career.

She came into the day with an 0-6 record against Top 10 women.

In the quarterfinals, the unseeded Pegula will play No. 22 Jennifer Brady of the United States or No. 28 Donna Vekic of Croatia.

Play is underway on Day 8 as Americans Jessica Pegula, Jennifer Brady and Shelby Rogers look to advance to the quarterfinals.

Pegula, who is appearing in the second week of a major for the first time, takes on fifth-seeded Elina Svitolina. Svitolina beat Pegula in straight sets when they met last month in Abu Dhabi.

Next up at Rod Laver Arena will be Brady's fourth-round match against Donna Vekic. Brady has only had her service broken once in three matches.

Rogers has the toughest job of all when she faces top-ranked Ash Barty to begin night play at Rod Laver. Rogers' only advantage is that Barty won't have any partisan Aussie fans to cheer her on — for the third day in a row, spectators are banned on-site due to a five-day COVID-19 lockdown.