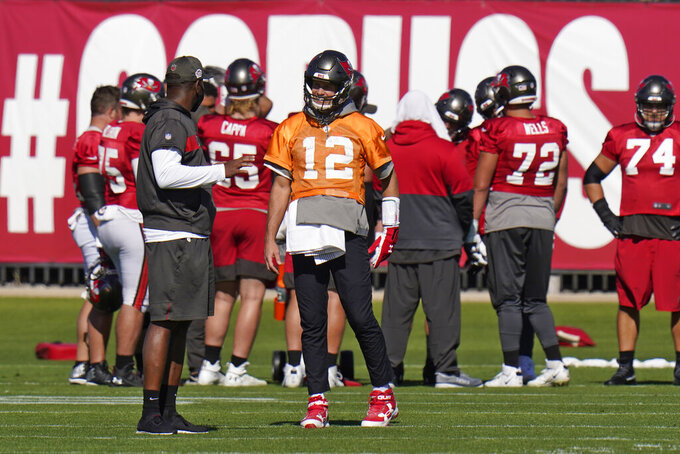 TAMPA, Fla. (AP) — Byron Leftwich remembers traveling to Lambeau Field for the first time, walking into the legendary stadium and soaking up the atmosphere.

“When you think of it, it’s the mecca of football. ... It’s like (Madison Square) Garden in basketball. I guess it’s like Wrigley Field in baseball. It’s a beautiful place to play the game of football,” Leftwich said.

“The way it looks, all of the names that are hanging on the walls there,” he added. “It’s football, old school football, and what football is all about.”

Leftwich was a young quarterback in his second NFL season when he led the Jacksonville Jaguars into Green Bay in December 2004.

He returns this weekend, a little more than a week after his 41st birthday, as the offensive coordinator of the Tampa Bay Buccaneers.

The Bucs (13-5) face the Packers (14-3) in Sunday’s NFC championship game, with Leftwich calling plays for a potent offense he’s helped six-time Super Bowl champion Tom Brady transform into one of the league’s best.

There have been growing pains, with Brady needing much of the season to get acclimated to a talented group of playmakers that includes Mike Evans, Chris Godwin, Antonio Brown, Cameron Brate, Ronald Jones, Leonard Fournette and Rob Gronkowski, the quarterback’s favorite target from his days with the New England Patriots.

Leftwich, the seventh overall pick from the 2003 draft, played nine seasons with the Jaguars, Buccaneers, Atlanta Falcons and Pittsburgh Steelers. He’s in his second season handling play-calling duties in Bruce Arians’ “no risk it, no biscuit” system.

Many questioned whether the 43-year-old Brady would be a good fit for a scheme that places an emphasis on pushing the ball down the field. He and Leftwich not only have made it work, the Bucs have thrived offensively during the six-game winning streak Tampa Bay will take to Lambeau Field.

”It wasn’t just Tom learning the guys, it was the guys learning where Tom is going to put the ball, how he’s going to see a certain play. All that just took a little time,” Leftwich said.

“The key for us was to just win games during the process. This league is about winning, don’t be fooled,” Leftwich added. “Week in and week out there will be different storylines, but we understand being in this game as long as we’ve been in it ... it’s about winning football games.”

Nearly a decade after hanging up his cleats, the offensive coordinator understandably is thrilled to have a chance to “coach and learn from a guy who is, obviously, the best to ever play” as Brady pursues a seventh championship ring.

Tampa Bay led the NFL in passing and ranked third in total offense in 2019, Leftwich’s first season as a full-time playcaller.

Brady threw for 4,633 yards, third-most in the league behind Deshaun Watson and Patrick Mahomes, this season. He also set a franchise record with 40 touchdown passes, second in the league to Green Bay’s Aaron Rodgers (48).

Despite the success, Leftwich has not been invited to interview for any of the head coaching openings in the NFL this winter.

That doesn’t sit well with Arians.

“Byron’s done a heck of a job,” the coach said. “He and Tom have a great relationship.”

One that Leftwich said continues to grow.

“I think what helps is we’re around the same age. We like the same type of things, we see life kind of the same. ... We just clicked from the time that we had an opportunity to work with each other,” the offensive coordinator said.

“I have a lot of respect for Tom ... and I think it’s the other way, too,” Leftwich added. “We just work our butts off every day trying to put our team in the best position to win football games.”