Lions and Texans meet with coaches whose jobs are not secure 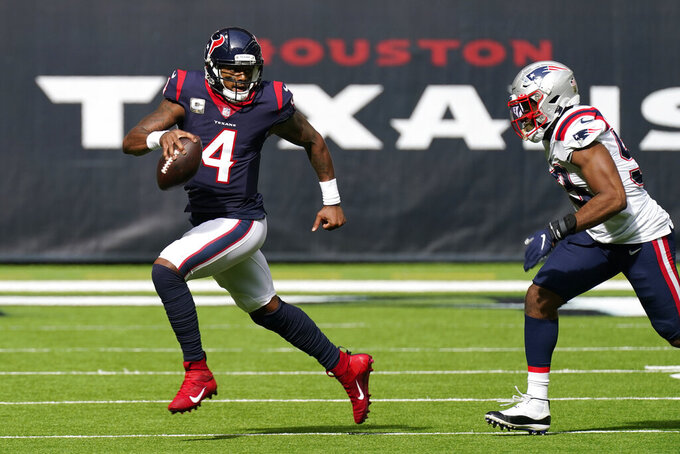 DETROIT (AP) — The Detroit Lions decided to give Matt Patricia another chance to coach this year and have chosen to stick with him during a shaky season.

Patricia may be running out of time, going into Detroit's annual home game on Thanksgiving against the Houston Texans.

The Lions (4-6) were shut out last week for the first time since 2009 and a loss to Houston (3-7) would make it difficult to do what ownership said was necessary, playing meaningful games in December.

“At the end of the day, everybody’s job is in jeopardy," Lions safety Duron Harmon said. “This is a production-based business. You win, you get a pat on the back, and you get job security. You lose, you don’t have job security.”

The Texans, meanwhile, are closing out the season with an interim leader. They fired coach and general manager Bill O’Brien after an 0-4 start dropped him to 52-48 in six-plus seasons on the sideline.

Houston promoted 73-year-old Romeo Crennel to interim coach and he is 3-3, coming off a win over the New England Patriots.

Chances are, Patricia and Crennel may be out of work after the season.

“We could get together and cry in the same bucket because this is a tough business we’re in," Crennel said.

The two coaches were together on Bill Belichick’s staff in New England for one season in 2004, when Patricia was just getting started in the league and Crennel was about to become a first-time head coach in Cleveland.

The Texans have played on Thanksgiving once and it was one of J.J. Watt's best games. The three-time Defensive Player of the Year had three sacks, five quarterback hits and defended two passes in Houston’s 34-31 overtime win at Detroit in 2012.

“To be able to have the game that I had was really special for me,” Watt said.

In last week's win, Watt became the first lineman in NFL history to defend four passes and have a tackle for a loss in the same game against the Patriots. He has defended 61 passes in his career, leading all linemen 2011.

“As disruptive of a player on the front as this league has seen in a long time," Detroit quarterback Matthew Stafford said. “Does a great job not only getting after the quarterback, but batting footballs down."

The Lions failed to score in last week's 20-0 loss at Carolina and are glad they don't have to wait long to get back on the field.

“We have a bad taste in our mouth," tight end T.J. Hockenson said. “We just want to go out and play."

Despite the loss of receiver DeAndre Hopkins in a trade several months ago, quarterback Deshaun Watson has the highest rating of his four-year career.

“He is one of the tops in the league at playing quarterback and being able to get out of pressure and extend plays, run the ball," Patricia said. “His arm strength is as strong as anybody in the league."

Nothing, though, has beaten the upbeat attitude out of him publicly.

Detroit is among the league's worst on the ground offensively, averaging just 95.4 yards rushing. While rookie D'Andre Swift was out with a concussion in last week's shutout loss at Carolina, Adrian Peterson and Kerryon Johnson combined for just 35 yards rushing on 13 carries.