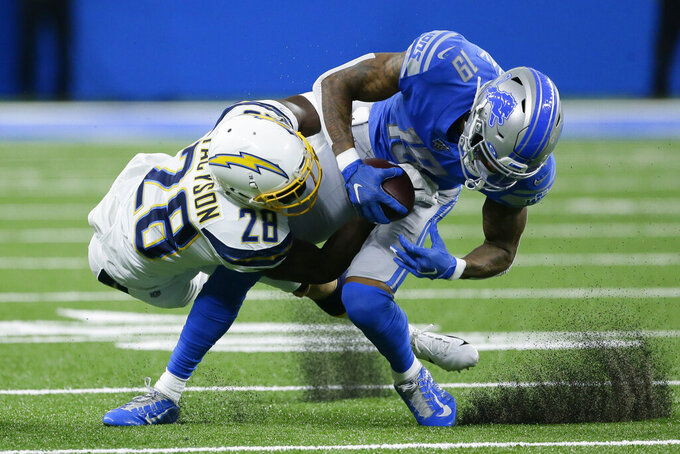 COSTA MESA, Calif. (AP) — A promising regular season is immediately threatened by injuries. Roster depth gradually erodes while far too many key players end up watching from the sidelines.

Give this description to Chargers fans, and they would have to ask you to specify the year.

The Bolts have lived this story several times in recent seasons, particularly near the end of their tenure in San Diego.

And just two games into a new season that began with legitimate Super Bowl aspirations, the Chargers are battered by injuries again. The losses have been particularly bad in Los Angeles' promising secondary, where three potential starters are already on injured reserve and a fourth has barely played.

Put it this way: The Chargers' starting strong safety this Sunday could be Roderic Teamer, an undrafted rookie who doesn't have a Wikipedia page.

But the healthy players and their coaches are confident the Chargers (1-1) have built up enough depth and resilience to get through this rough patch, even with Deshaun Watson, DeAndre Hopkins and the Houston Texans (1-1) visiting Carson on Sunday.

In fact, Gus Bradley — the Chargers' irrepressibly optimistic defensive coordinator — sees this tumult as a chance to be seized.

"When you have injuries like this, it gives opportunities to guys," Bradley said. "There is going to be a story that takes place. That part of it, I think, is pretty cool."

That story is only possible because a secondary that appeared to be one of the NFL's best hasn't even had a chance to play together, and its injury problems are only getting worse.

All-Pro safety Derwin James is already on injured reserve with a broken bone in his foot from training camp. Fellow safety Adrian Phillips joined him on injured reserve Tuesday, two days after he broke his arm in Detroit. Cornerback Trevor Williams, who started seven games last season, is also on IR with a quadriceps injury.

Starting cornerback Michael Davis has missed two days of practice this week with the hamstring injury that has kept him out for all but the first five snaps of the season opener. Star cornerback Casey Hayward is the only expected starter still healthy enough to play against the Texans, and he had to play all 61 snaps last week against the Lions.

Brandon Facyson, an untested second-year pro who signed with the Chargers as an undrafted free agent, was forced to make his first career start at cornerback last week. He is likely to be in the starting lineup again, and while Bradley will try to match up Hayward with Hopkins, it's likely Facyson will have to step up as well.

"In the first game, he kind of got thrown into it," Bradley said. "I think he was prepared and ready to go as a corner, but a lot of his focus was on special teams. Last week, he had a chance to prepare fully knowing that he was going to be the starter. Hopefully now in really his second game, he takes the next step."

Phillips was an All-Pro special teams player last season, and he was off to a solid start in James' place at strong safety this season before breaking his arm.

If the Chargers don't take a chance on the untested Teamer in the starting lineup, the responsibility could fall to Rayshawn Jenkins, who started at free safety last week. Jenkins has done practice work at strong safety in the physical, in-the-box role required of the position, but it would be an added degree of difficulty.

Promising rookie safety Nasir Adderley is also a possibility for an increased role, but the second-round pick is still getting up to speed after missing most of training camp with a hamstring injury.

The Chargers are without three of their seven Pro Bowl selections from last season with the continued contract holdout of running back Melvin Gordon. They were down six starters in Detroit even before Phillips got hurt.

It's just part of being the Chargers — and being in the NFL, according to coach Anthony Lynn.

"There are more than I like, but we have guys that are stepping up," Lynn said. "We have complete confidence in these guys. I feel like we haven't missed a beat. It's just part of the game. You look around the league, guys are going down. It's football."