Mathis faces up to 4 flags in penalty-plagued Broncos loss 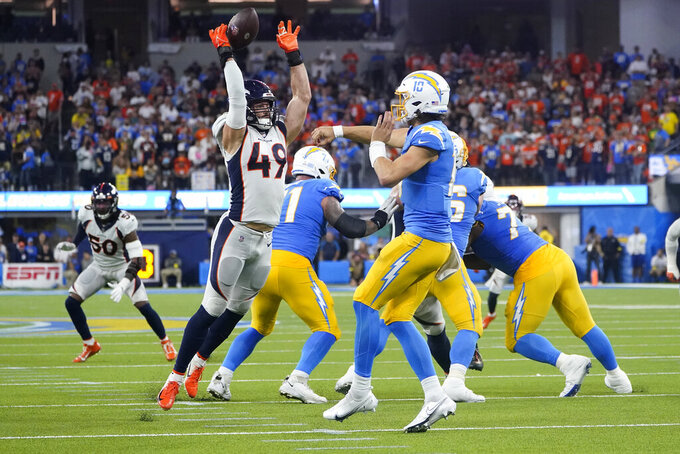 Mathis' day got better, but it also got worse.

When the Broncos' 19-16 overtime loss was finished Monday night, Mathis had been flagged for pass interference a whopping four times for an even more whopping 87 penalty yards — the fifth-most by a single player in any single game since the 2000 NFL season.

Mathis faced up to questions in the SoFi Stadium visitors' locker room after the game, and the fourth-round pick from Pitt didn't cry foul over all those flags.

“Just need to clean up my technique,” Mathis said. “I was in good position. I don’t even want to (say the calls were) questionable. Just keep my eyes up and play the ball.”

The rest of the Broncos (2-4) also largely didn't complain after they were hit with 10 penalties for 151 yards in their third consecutive loss. That's the second-most penalty yards in franchise history, the most since 1976 and the most by any NFL team this season.

Mathis knew Justin Herbert and the Chargers could be going after him early and often. He got his first start because Ronald Darby went down last week with a torn knee ligament, and he was an obvious target with Pat Surtain II on the other side.

Mathis was flagged three times in the first half alone: He committed a 36-yard interference penalty in the second quarter, followed by an 11-yarder four plays later in a drive that ended with a tying field goal for the Bolts.

But Mathis also had a shining moment when he dived to make a picture-perfect pass breakup on Herbert's fourth-down throw to DeAndre Carter for a turnover on downs on the opening play of the fourth quarter. The Broncos' defense and bench mobbed Mathis in celebration.

“Anytime you make a play like that, especially a turnover on downs, it’s always big,” Mathis said. “That was good that I could stand up and hold my own.”

Denver leads the NFL with 54 penalties for 486 yards, yet none of the Broncos appeared to blame the loss on the Colorado avalanche of flags thrown against them.

“We've been harping on that quite a bit,” Denver coach Nathaniel Hackett said. “I think both teams had a lot of penalties in this game ... but again, we've just got to play cleaner football across the board.”

The offensive players knew they were much more to blame after they failed to score a touchdown on their final nine drives after the first quarter. It’s a continuation of a season-long theme for the Broncos, who have held five of their six opponents under 20 points, yet somehow managed to lose three of those five games.

Denver was still in position to pull out a victory before P.J. Locke failed to hear punt returner Montrell Washington calling for a fair catch in OT. Locke tried to block the Chargers' Ja’Sir Taylor, who alertly pushed Locke into Washington to force a turnover.

“Adversity is definitely challenging us right now, but the only way I know through it all is just to continue to work hard and continue to believe," said Russell Wilson, who failed to complete more than 55% of his passes for the third time already this season. "It felt like we should have won that game tonight, so we’ve got to look at the film and see what we can do better.”

Denver managed minus-9 net yards passing in the second half and overtime — just 72 net yards overall. The struggles overshadowed every good effort by the defense, including an eye-popping 21 tackles by linebacker Alex Singleton.

“Something’s obviously not going right, and we need to find a way to fix it,” Broncos safety Justin Simmons said. “Everyone knows the definition of insanity, and we can’t keep doing the same thing week in and week out and think things are going to change. From that standpoint, we’ve just got to figure it out.”