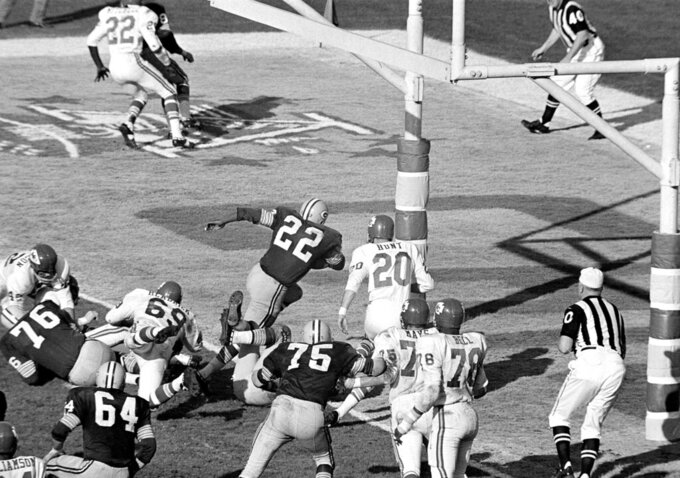 FILE - In this Jan. 15, 1967, file photo, Green Bay Packers' Elijah Pitts (22) charges into the end zone, eluding Kansas City Chiefs' Bobby Hunt (20), during the first Super Bowl in Los Angeles. Pitts scored from the five on the play following Willie Wood's interception in the third quarter. The Packers and the Chiefs had no way of knowing what the Super Bowl would become when they met at Los Angeles Memorial Coliseum on Jan. 15, 1967. (AP Photo/File)

KANSAS CITY, Mo. (AP) — The Green Bay Packers and Kansas City Chiefs had no way of knowing what the Super Bowl would become when they met at the Los Angeles Memorial Coliseum on Jan. 15, 1967.

All they knew was they didn't like each other much.

The NFL had for years successfully fended off rival leagues, but the AFL came along — founded by Chiefs owner Lamar Hunt and his buddies in the "Foolish Club" — with proven staying power. Eventually the two leagues would merge, but first came a matchup between their respective champions.

The teams from the NFL, including the Packers, were out to prove their dominance in professional football. Their counterparts from the AFL came in with a considerable chip on their shoulders.

"They called us a Mickey Mouse league," recalled Chiefs linebacker Bobby Bell, one of 14 players to take the field that day who would land in the Hall of Fame. "We're like, 'Hey man, wait a minute. We're not Mickey Mouse. We put our uniforms on just like everybody else.'"

The Chiefs proved that at the start, playing perhaps the best team from Packers coach Vince Lombardi's dynasty to a near-stalemate in the first half. But things turned in the third quarter, when Willie Wood picked off Chiefs quarterback Len Dawson and nearly returned it for a touchdown.

Packers quarterback Bart Starr, the game's MVP, called it "the biggest play of the game."

"We said going into halftime, 'We can beat these guys, you know?' the Packers' Hall of Fame offensive lineman, Jerry Kramer, told NFL Network for a special on the 100 greatest games in history. "The first half was almost even and we got sobered up at halftime and got about our business."

The game was played before a crowd of 61,946, leaving thousands of empty seats in the cavernous Coliseum, though an estimated 51 million viewers tuned into the broadcast shown simultaneously by CBS and NBC. Both networks later erased the game footage, which was pieced together a few years ago.

The halftime entertainment that mild January day in Southern California? Not the Beatles or The Rolling Stones or even The Beach Boys with their smooth surfer vibe but the marching bands from the University of Arizona and Grambling State University.

Much has changed over the years. Tickets for the Super Bowl go for thousands of dollars, if you can find any for sale, and the broadcast of the game is the centerpiece of parties all over North America.

The halftime show for February's game in Miami? Jennifer Lopez and Shakira.

As the Packers and Chiefs prepare to meet again Sunday night at Arrowhead Stadium, here's a look at how that first Super Bowl affected each franchise in subsequent seasons:

The game signified the high-water mark for Lombardi's dynasty of the 1960s, though the Packers would go on to beat Oakland to make it back-to-back Super Bowl triumphs the following year. Green Bay went just 9-4-1 that season, and several of its biggest stars began showing signs of aging.

Lombardi would hand the franchise over to his longtime assistant, Phil Bengtson, in 1968 and a rapid regression followed. The Packers went 6-7-1 and missed the playoffs, and would qualify for the postseason just twice — in 1972 and '82 — until Mike Holmgren took over nearly 25 years later.

Led by a hotshot young quarterback name Brett Favre, the Packers returned to prominence, winning another Super Bowl in 1996. Mike McCarthy led them to their most recent championship in 2010.

The Chiefs failed to make the postseason the next year, but coach Hank Stram and his team of veterans weren't done yet. They went 12-2 in 1968 before losing in the playoffs, then captured that elusive Super Bowl championship when they beat the Vikings in the fourth edition on Jan. 11, 1970.

It remains the only Super Bowl appearance in franchise history.

The 1970s and '80s were lost decades for the Chiefs. Marty Schottenheimer and Dick Vermeil led a renaissance beginning in the 1990s, but for all their success, they only made one AFC title game.

The Chiefs finally made it back last season, losing to the Patriots on the brink of a Super Bowl.

1993: The Packers and Chiefs have only played 12 times, including their Super Bowl matchup, but none of the other meetings was meaningful until this one. Greg Hill had two touchdowns running and one through the air, helping Kansas City to a 27-20 win between a pair of playoff teams.

Green Bay went on to finish 9-7 and beat Detroit in the playoffs before losing to Dallas in the divisional round. Kansas City went 11-5 and won the AFC West, beat Pittsburgh and Houston to reach the AFC championship game, then lost 30-13 to the Bills on a frigid day in Buffalo.

2003: Ten years after that memorable matchup, the Chiefs edged the Packers 40-34 in overtime in another matchup of eventual playoff teams. Eddie Kennison caught a 51-yard touchdown pass from Trent Green with 6:11 left in the extra session to give the Chiefs the win.

2015: The Packers beat the Chiefs 38-28 on their way to a 6-0 start. Aaron Rodgers threw for 333 yards and five touchdowns in the win, while Jamaal Charles scored three times for Kansas City.