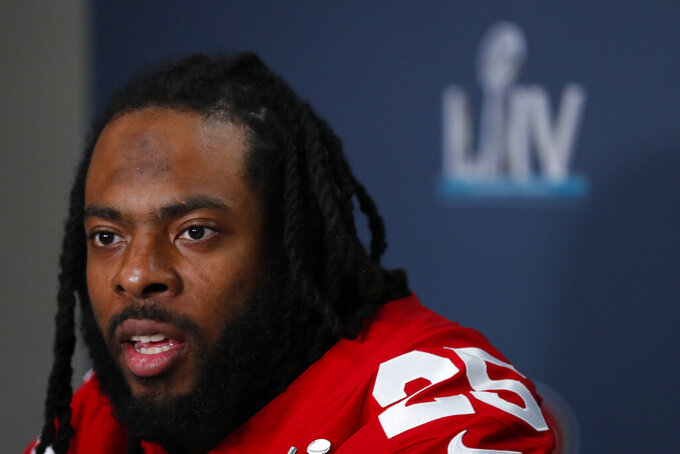 As intense and emotional as Richard Sherman is while trying to help his football team win, he's just as passionate when he instructs folks on a societal challenge: financial stability.

The star cornerback of the San Francisco 49ers and one of the NFL's most outspoken leaders, Sherman has partnered with the NFL Alumni Association and Million Stories Media as part of the Million Stories initiative.

The partnership emphasizes financial literacy education to prepare for future job loss or career changes. The idea, which Sherman discusses in his “Adulting with Richard Sherman” video, focuses on having an emergency fund. He wants to combat financial mismanagement through free, accessible educational resources. The video features celebrities, business leaders, and, well, Americans.

“This is a bit of a different approach because, at least with Richard, you have a player reaching out to the general population with advice and his story," says Shelley Miles, the CEO of the Singleton Foundation for Financial Literacy & Entrepreneurship who spearheaded Million Stories.

"The whole idea behind Million Stories was to use entertainment to break the taboo about talking about money. There is all the financial literacy education info out in the world, but if someone does not hear it from someone they respect, they might not be willing to try it out.”

Million Stories Media is a free digital channel offering programming and resources covering a range of financial topics that affect the lives of many young people. Hooking up with NFL Alumni provides a fertile outlet for these stories, with more in the works.

“Our thought is to help people lay a pathway so we have a lot of resources for aspiring entrepreneurs,” Miles says.

NFL Alumni now has another outlet to provide its 3,500 members with the tools to run businesses, fire up their workforce and uplift their communities. One tool is 1Huddle, an app allowing players to investigate such workforce areas as leadership, sales, customer service, diversity.

“We think it is important because players need access to innovative technology that supports the great work they’re doing through their businesses," says Beasley Reece, who played nine seasons in the league and now is the NFL Alumni’s CEO.

“We have always been more a financial savvy group of retired NFL alumni,” Reece adds. “I am told there is a 60% to 70% bankruptcy rate after life in the NFL; that is not my experience. That is not really our alumni. Our guys have made the transition and have the success and found a different career.”

The pandemic, however, brought new challenges for the association.

“When COVID first hit we raised enough money where every alumni who was struggling during the pandemic, whether his business shut down or he lost a job and needed money for necessities, we were able to help,” Reece says. “We had dozens of alumni who gave three and four figures and we were able to send out checks to the people in need.”

In recent conversations with the Centers for Disease Control and Prevention, NFL Alumni was charged with having its members use their celebrity to encourage people to get COVID-19 vaccinations.

“And that is a platform we are moving toward,” Reece said, “because of the effects of COVID on much of our membership and communities we come from.”