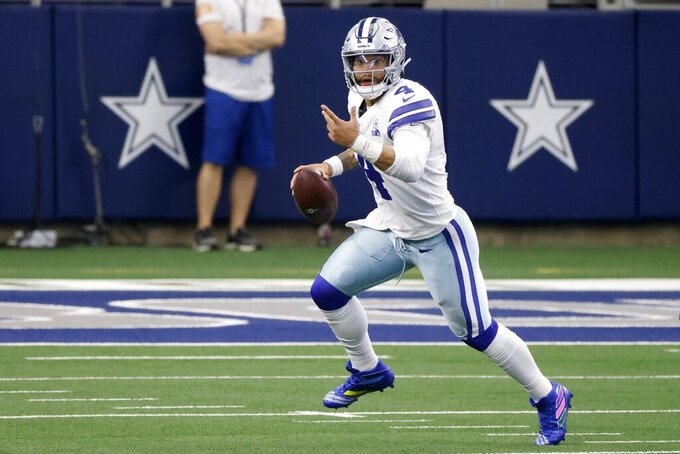 FILE - Dallas Cowboys quarterback Dak Prescott (4) scrambles out of the pocket before throwing a pass in the second half of an NFL football game against the Cleveland Browns in Arlington, Texas, in this Sunday, Oct. 4, 2020, file photo. It's too early to know where the NFL salary cap will end up in the range of $180 million to $198 million coming off a pandemic-dominated season that was completed on time but still cost the league billions of dollars in revenue. It's a potential problem for the Cowboys if they can't get a long-term deal with quarterback Dak Prescott, which would cause his cap charge to hit $37 million with another franchise tag after being around $31 million last year. (AP Photo/Ron Jenkins, File)

It's too early to know where the NFL salary cap will end up in the range of $180 million to $198 million coming off a pandemic-dominated season that was completed on time but still cost the league billions of dollars in revenue.

A glimmer of good news for teams came this week in the potential floor of the cap going up to $180 million after an initial agreement between the league and the players' union that it wouldn't be lower than $175 million.

The higher figure in the possible range is the 2020 number, and simple economics seem to make it all but certain that a seven-year run of the salary cap going up at least $10 million per season will end.

A flat-at-best cap could be an issue for the handful of teams currently over the $180 million figure, including the two-time AFC champion Kansas City Chiefs.

It's also a potential problem for the Dallas Cowboys if they can't get a long-term deal with quarterback Dak Prescott, which would cause his cap charge to hit $37 million with another franchise tag after being around $31 million last year.

Dallas, however, is third among clubs with significant carryover cap space from 2020 at $25.4 million. Only Cleveland ($30.4 million) and the New York Jets ($26.7 million) have more, according to figures released by the union.

A look at some of the key issues as NFL teams wait for the final number going into free agency, which starts March 17.

Even without a reduction from the 2020 salary cap, NFL teams will be in an uncomfortable place. Based on year-over-year increases from most of the past decade, the 2021 cap would be approaching — if not exceeding — $210 million.

If the cap ended up at $185 million, that's still $25 million less than teams would have to spend without the lost revenues of 2020. And that's more than the franchise tag figure at every position except quarterback.

Jacksonville, the Jets and New England have the most room under the cap, according to overthecap.com. The Jaguars will have somewhere around $80 million to spend, possibly more, and could have a relatively inexpensive quarterback if Trevor Lawrence is drafted No. 1 overall and ends up starting for new coach Urban Meyer.

Indianapolis also has some flexibility even after adding Carson Wentz in a trade with Philadelphia and the $25 million cap charge coming with the No. 2 overall pick from the 2016 draft.

The Chiefs are among 13 teams currently over the cap, according to overthecap.com, which is projecting a $180 million cap right now. Of those 13, eight made the playoffs, including New Orleans. However, two of the postseason qualifiers in Buffalo and Tennessee are marginally over the cutoff, and would be under if the cap ends up at $185 million or higher.

“We’ve got several different models that we’ve looked at,” Titans general manager Jon Robinson said. “We’re in better shape than some teams are cap-wise and we’re not as good as others, but we’ll work through it.”

The Saints have the biggest overage at $69.5 million, although the possible retirement of quarterback Drew Brees could help along with several veterans who could be cut with significant cap savings.

New Orleans could be a good illustration of an issue that figures to play out across the league, with cap experts predicting widespread releasing of higher-paid veterans. It's already happening to some degree.

Although Houston and star defensive end J.J. Watt said his release was a mutual decision, it might have happened regardless with the 32-year-old set to make $15.5 million while the guaranteed money had already been paid in the $100 million, six-year extension he signed in 2014.

Atlanta cleared almost $11 million in cap space by releasing safety Ricardo Allen and defensive end Allen Bailey this week. They had 146 career starts between them. Expect similar moves in the coming weeks, even before the cap number is announced.

Of the 14 players given the franchise tag last year, only two signed long-term deals. One was Tennessee running back Derrick Henry, who became the NFL's first 2,000-yard rusher in eight years.

Given the continuing financial uncertainty in the NFL — owners still don't know if they'll have full stadiums in 2021 — the tag could become a bridge to a more certain future, just as it appeared to be last season.

It's also worth noting that a decrease in the cap could mean lower salaries on some of the franchise tags, another incentive for owners to go that route. But that won't work with those who played under the tag last season. For example, Prescott gets a raise based on a percentage of what he made in 2020, per rules in the labor deal.