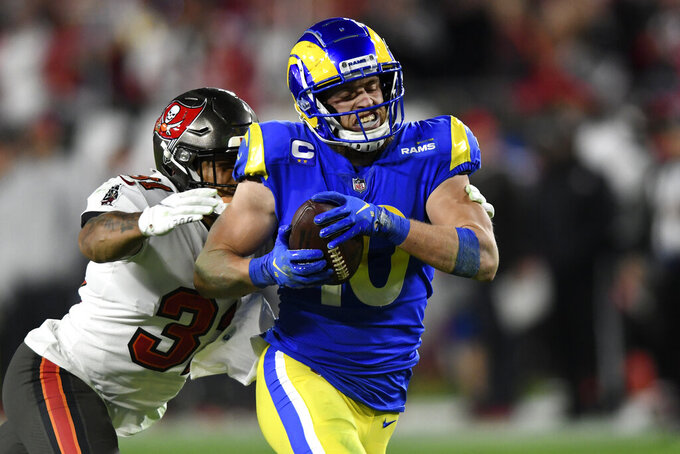 Cincinnati at Kansas City, 3 p.m. EST. The Bengals advanced to the AFC championship game for the first time since the 1988 season by beating Tennessee 19-16 on Saturday. Rookie Evan McPherson kicked four field goals, including a 52-yarder as time expired. Cincinnati will travel to Arrowhead Stadium to face Kansas City, which advanced to its fourth straight AFC title game with a 42-36 overtime win over Buffalo on Sunday night.

San Francisco at Los Angeles Rams, 6:30 p.m. EST. The NFC West rivals square off for the third time this season — and the 49ers have won the past six meetings. San Francisco advanced on Robbie Gould's 45-yard field goal as time expired to give the 49ers a 13-10 victory over the top-seeded Green Bay Packers on Saturday night. Matthew Stafford and the Rams made it to the NFC championship game by topping Tom Brady and the defending Super Bowl champion Buccaneers 30-27 on Matt Gay's 30-yarder on the final play Sunday.

— Patrick Mahomes, Chiefs, finished with 378 yards passing and three touchdowns, including an 8-yarder to Travis Kelce in overtime, to lead Kansas City past Buffalo 42-36 on Sunday night.

— Matthew Stafford, Rams, went 28 of 38 for 366 yards and two touchdowns to help lift the Los Angeles Rams to a 30-27 divisional playoff victory over the defending Super Bowl champion Tampa Bay Buccaneers on Sunday.

— Joe Burrow, Bengals, threw for 348 yards and shook off nine sacks to lead Cincinnati past Tennessee 19-16 on Saturday and become the first quarterback taken No. 1 overall to win a divisional game within his first two seasons.

— Joe Mixon, Bengals, ran for 54 yards and a touchdown, and also caught six passes for 51 yards in Cincinnati's 19-16 victory at Tennessee.

— All-Pro Cooper Kupp, Rams, caught nine passes for 183 yards, including catches of 20 and 44 yards on Los Angeles' winning drive, and a touchdown in a 30-27 victory at Tampa Bay.

— Aaron Jones, Packers, had nine catches for 129 yards and the running back also had 12 carries for 41 yards in Green Bay's 13-10 loss to San Francisco on Saturday night.

— Mike Evans, Buccaneers, caught eight passes for 119 yards and a TD in Tampa Bay's 30-27 loss to the Los Angeles Rams.

— Evan McPherson, Bengals, kicked a 52-yard field goal as time expired as fourth-seeded Cincinnati topped No. 1 seed Tennessee 19-16. It was the rookie’s 11th field goal from 50 yards or longer, the most in a season for one player.

— Robbie Gould, 49ers, made a 45-yard field goal Saturday night as time expired that knocked off the top-seeded Packers 13-10.

— Jordan Willis, Talanoa Hufanga and Jimmie Ward, 49ers. Willis blocked a punt by Corey Bojorquez and Hufanga picked up the ball at the 6-yard line and ran it in for a late tying score in San Francisco's 13-10 victory at Green Bay. Ward blocked a 39-yard field-goal attempt from Mason Crosby on the final play of the first half.

— Harrison Butker, Chiefs, made up for an earlier missed field goal and extra point by kicking a 49-yarder to send it to overtime in Kansas City's 42-36 win over Buffalo.

— Jeffery Simmons, Titans, had three of Tennessee's nine sacks of Joe Burrow in a 19-16 loss to Cincinnati.

San Francisco beat Green Bay 13-10 on Saturday night for the 49ers' 17th conference championship appearance — breaking a tie with Pittsburgh for the most by any team since the conferences were formed in the 1970 NFL merger. ... Cincinnati rookie Evan McPherson's 52-yard field goal to beat Tennessee 19-16 on Saturday was his 11th kick from 50 yards or longer, the most in a season for one player. He also became the first kicker in NFL history with at least four or more field goals in multiple games in a single postseason. ... With 142 yards receiving, Tennessee's A.J. Brown broke the franchise's single-game playoff record, previously held by Ernest Givins (136, 1989 vs. Pittsburgh). ... Buffalo's Gabriel Davis set the NFL playoff record with four touchdown receptions in the Bills' 42-36 overtime loss at Kansas City.

With Green Bay's 13-10 loss Saturday night, Aaron Rodgers dropped to 0-4 in career playoff starts against San Francisco. He’s the first quarterback in NFL history to lose four playoff starts to a single opponent. ... Robbie Gould made two field goals, including a 45-yarder as time expired to beat Green Bay, making him 20 for 20 in his career on field-goal attempts in the playoffs. ... The Titans’ 19-16 loss to Cincinnati was their third straight defeat on their own field as the AFC’s No. 1 seed. Tennessee hasn’t won at home since January 2003 in the postseason. ... Buffalo's 42-36 overtime loss at Kansas City on Sunday night was the Bills' ninth straight road playoff defeat, going back to their victory in the 1992 season’s AFC championship.

The Los Angeles Rams, San Francisco 49ers and Cincinnati Bengals all won on the road, matching 1971 and 2008 for the most road wins in the divisional round of the playoffs since the 1970 merger. Buffalo lost 42-36 in overtime at Kansas City, preventing all four road teams from winning in the divisional round for the first time in NFL history.

IS THIS THE END?

If Tom Brady played the last game of an unprecedented career, he ended with one of his toughest losses after a stunning comeback. Bloodied and battered by the Los Angeles Rams, the 44-year-old seven-time Super Bowl champion rallied the Tampa Bay Buccaneers back from a 27-3 deficit, only to see the defense surrender a big play in the final minute to set up Matt Gay’s winning 30-yard field goal Sunday. “Truthfully, guys, I’m thinking about this game. I’m not thinking about past five minutes from now,” Brady said when asked about his future. Brady is under contract for 2022, but his return isn’t definite. “I haven’t put a lot of thought into it, taking it day by day,” he said.

Tampa Bay's 27-3 loss to the Los Angeles Rams on Sunday means the NFL will see a new champ this year. The Buccaneers were trying to become the first team to repeat as Super Bowl champions since the Tom Brady-led New England Patriots during the 2004 season.

A week after snapping a 31-year playoff victory drought, the Cincinnati Bengals finally won their first road game in the postseason — winning at Tennessee 19-16 on Sunday — after losing their first seven. They reached the 1981 and 1988 Super Bowls by winning on their home field.

Tennessee’s nine sacks in its 19-16 loss to Cincinnati on Saturday tied the NFL playoff mark previously set by Kansas City against the then-Oilers on Jan. 16, 1994, Cleveland vs. the Jets on Jan. 3, 1987; the 49ers against the Bears on Jan. 6, 1985 and Buffalo against the Chiefs on Jan. 1, 1967. The Titans' five sacks in the first half were the most in a playoff game since Jan. 8, 2000, when Tennessee sacked Buffalo's Rob Johnson five times in the game best known for the Music City Miracle. Cincinnati's Joe Burrow was only the third quarterback to be sacked at least five times in the first half of a playoff game since 1991.

Kansas City safety Tyrann Mathieu left on the opening drive of the Chiefs' 42-36 overtime victory over Buffalo with a concussion after the Pro Bowl safety was hit by teammate Jarran Reed’s knee. ... Chiefs teammate cornerback Charvarius Ward was hurt trying to tackle Buffalo QB Josh Allen with 5 1/2 minutes left in the game. ... San Francisco running back Jeff Wilson left the 49ers' 13-10 win at Green Bay with an ankle injury after the opening kickoff. ... Packers safety Darnell Savage (back) and running back A.J. Dillon (chest) left in the third quarter. ... Cincinnati Pro Bowl defensive end Trey Hendrickson, cleared from a concussion that knocked him out of last week’s wild-card win, went to the sideline with 1:46 left in the Bengals' 19-16 win at Tennessee. ... The Los Angeles Rams played without left tackle Andrew Whitworth, who was hurt during the previous week’s wild-card round victory over Arizona. ... Tampa Bay punt returner Jaelon Darden left the Buccaneers' 30-27 loss to the Rams with a possible concussion in the fourth quarter.

— “When it’s grim, be the grim reaper, and go get it.” Kansas City coach Andy Reid on what he told Patrick Mahomes down the stretch of the Chiefs' 42-36 overtime win over Buffalo.

— “We’re here to make some noise, and teams are going to have to pay attention to us.” — Cincinnati quarterback Joe Burrow after the Bengals beat the Titans at Tennessee 19-16 to advance to the AFC championship game.

— “A little numb, for sure. I didn’t think it was going to end like this.” — Green Bay quarterback Aaron Rodgers after the Packers were eliminated from the playoffs with a 13-10 loss to San Francisco.