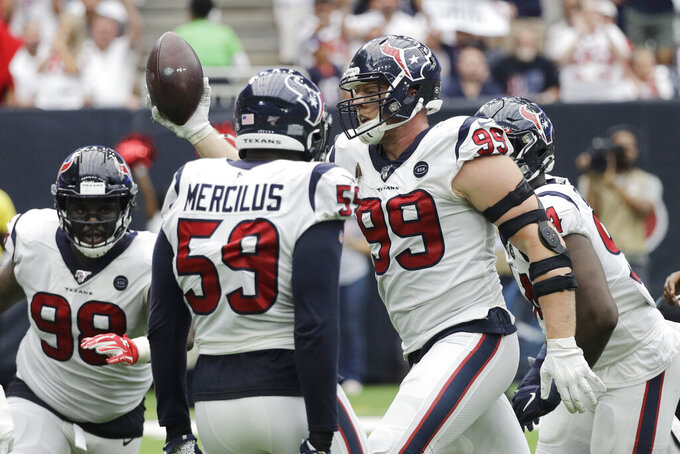 COSTA MESA, Calif. (AP) — Derek Watt and J.J. Watt have played against each other in the yard of their parents' home in Waukesha, Wisconsin.

There will be bigger stakes on Sunday when Derek and the Los Angeles Chargers host the Houston Texans and his All-Pro older brother.

It will be the first time J.J. has played against either of his two brothers. When the Chargers faced the Texans in 2016, Derek's rookie year, J.J. was sidelined with a season-ending back injury. J.J. also missed the Texans' 2017 game against the Pittsburgh Steelers, where youngest brother T.J. is a linebacker, because of a broken leg.

"It's special. It is going to be a fun one for sure," Derek Watt said before Wednesday's practice.

"It's very cool. I'm not going to try and act like it's not exciting," J.J. Watt said. "It is very surreal being in a meeting, seeing him on the scouting report and flipping on the film. Just like any week you're watching the film but this time it's your brother instead of the fullback."

The brothers do have their own competitions during offseason workouts. Derek says he has the edge in speed and agility drills but J.J. and T.J. have a better vertical leap.

"It's always competitive. I've really worked out with him my whole life and we've been using the same trainer since high school," Derek said. "We always push each other."

Derek is the only Watt brother who plays offense. He has also emerged as one of the Chargers' top special teams players.

He has seen some opportunities to carry the ball during the first two weeks. Derek had a 2-yard carry for a first down during the game-winning drive against Indianapolis in Week 1 and had a 3-yard reception last week at Detroit.

"I love watching him play," J.J. said. "He's willing to take on middle linebackers, take on guys on the edge. He can catch."

Derek could end up blocking J.J. on at least a couple plays. According to SportRadar, the Texans used the blitz on 32.1% of pass plays in their first two games, which is slightly above the league average of 28.1%. They are also averaging seven quarterback hurries per game.

The Chargers are one of two AFC teams against whom J.J. hasn't recorded a sack (the Patriots are the other). The only time he has faced Philip Rivers was 2013.

"He's established himself as a dominant player and can wreck games for sure. We'll account for him," Derek said.

The Watts' parents will be in attendance. J.J. said the game will probably be more nerve-racking for their mom, while their dad will be pointing out what they did wrong. J.J. did get to experience slightly what both might be feeling last season when the Chargers took on the Steelers.

"It was very interesting, honestly," J.J. said of last year's game. "I didn't know really what to do. Because normally you're looking like, 'I want T.J.'s team to win, or I want Derek's team to win,' but then you're watching the game and normally you're like 'OK, well he plays offense and I just want the offense to do good,' but then T.J. was on defense. If Derek was not in the game, then I would want T.J. to get a sack, and if Derek was in the game, then it was like, 'I hope he gets a catch, but not on T.J.'s side.' I don't know. "

All three brothers are continuing to stay in touch this week, despite bragging rights on the line. The rivalry will resume on Oct. 13 when T.J. and the Steelers try to avenge last year's loss to Derek and the Chargers.

"For us, it's very easy to be best friends and brothers right up until kickoff and then during the game, flip the switch," J.J. Watt said.

The Watts aren't the only family that has something on the line on Sunday. Chargers coach Anthony Lynn's son, D'Anton, is the Texans' assistant secondary coach. Unlike the Watts, though, Anthony Lynn said he won't speak to his son until after the game.