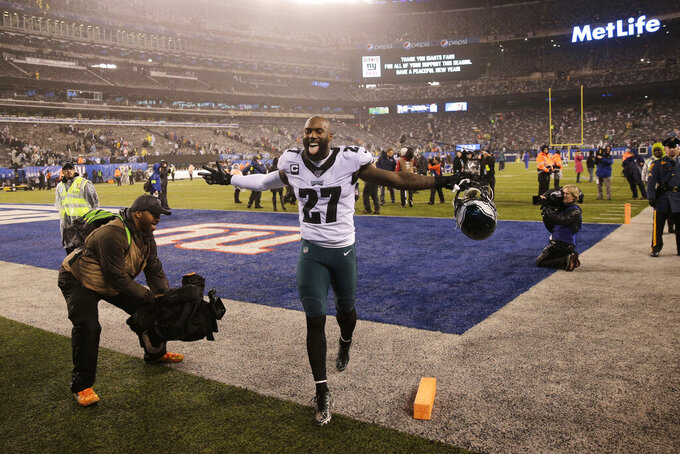 PHILADELPHIA (AP) — The Philadelphia Eagles overcame one injury after another to reach the playoffs for the third straight season.

Sound familiar? It should.

Only difference this time around is Carson Wentz is healthy and seemingly everyone around him went down.

Wentz missed the playoffs with injuries when Nick Foles stepped in and led the Eagles to their first Super Bowl title two years ago and helped them reach the divisional round last season.

Despite a slew of injuries this year, Wentz led a group of unknowns on offense to four straight wins to capture the NFC East title. The Eagles secured the division crown with a 34-17 win over the Giants on Sunday while finishing the game without seven offensive starters.

"I'm grateful for my health, I'm grateful to be out here with the guys in these big meaningful games, playing into January," Wentz said. "The last few weeks have been backs against the wall for us. Guys have responded and stepped up and kept making play after play. Just kept believing and here we are playing into January and hopefully do something special."

Wentz completed 67.6% of his passes for 1,199 yards, seven touchdown and no interceptions in the final four games — all must-wins. He was at his best in the fourth quarter and overtime, leading the team to two comeback wins.

The Eagles relied on guys off the practice squad during the most important games of the season after losing wide receivers DeSean Jackson, Alshon Jeffery and Nelson Agholor to injuries. Pro Bowl tight end Zach Ertz didn't play against the Giants. Running back Miles Sanders left the game in the first half and Jordan Howard only played one snap in his return after missing six games.

The offense has been in a rhythm despite missing all those key starters. Pederson and offensive coordinator Mike Groh have simplified the scheme, the play design is much improved and the play calling is working off the team's strengths. Wentz is playing loose and free. He's focused, determined and taking care of the ball.

The right side of the offensive line has been Philadelphia's strength behind Johnson and Brooks. Johnson is trying to return from an ankle injury, Brooks is a big loss.

Boston Scott, promoted from the practice squad in October, ran for three touchdowns against the Giants and led the team in rushing with 54 yards and receiving with 84 yards. He's only 5-foot-6 but Scott has speed, he's shifty and he's strong.

Wide receiver J.J. Arcega-Whiteside, a second-round pick, played only 17 snaps and had no catches. Meanwhile, Ward, Davis and Burnett made significant contributions. Ward made his first career reception on Nov. 24 and Davis and Burnett only joined the active roster this month.

Brooks will have season-ending surgery and reserve defensive end Daeshon Hall tore his ACL on the final play of the game. Ertz (broken rib), Johnson and cornerback Jalen Mills (ankle) could try to practice Wednesday. Sanders left with an ankle injury and cornerback Avonte Maddox also exited with an undisclosed injury, but Pederson said both should be fine.

16.8 — The Eagles are tied with Buffalo for third-fewest points allowed per game at home behind New England (15.0) and Minnesota (16.1). The Seahawks are 4-0 against Philadelphia with Russell Wilson, but the Eagles held them 348 total yards in a 17-9 loss on Nov. 24.

The Eagles seek their first win over Seattle since Nov. 2, 2008. The Seahawks have won five straight and are 10-7 overall against Philadelphia.