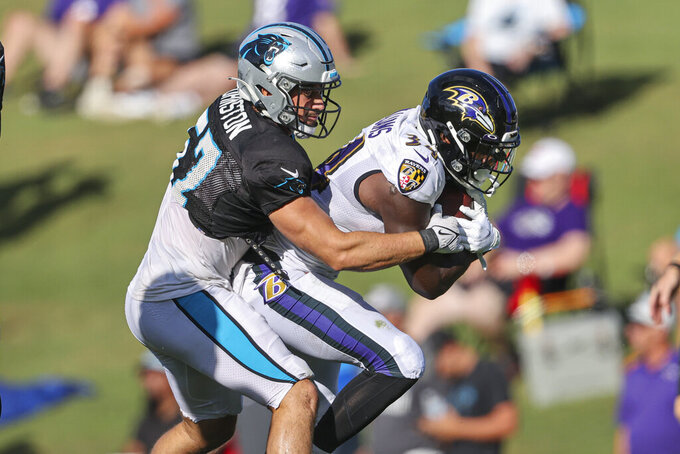 “We weren’t very good getting open and catching the football,” Rhule said following a 2 1/2-hour practice at Wofford College.

There were at least six drops by Carolina receivers and several other potential completions were broken up by Ravens defenders.

Carolina’s second-year coach continued to praise quarterback Sam Darnold and thought his team’s offensive line did a nice job of run blocking and picking up blitzes against what he called Baltimore’s “vaunted” defensive front seven. But Rhule took a not-so-subtle dig at his wide receivers, who were without starter Robby Anderson because of a tight hamstring.

He even teased that some of his wide receivers must be “getting a little tired" as training camp winds down.

"I always say no excuses, so I'm saying that more as a jab” at them, Rhule added. "A little sun out here and all of a sudden we felt a little tired, felt a little sorry for ourselves. I told our young guys that you don't get to like all of the Instagram posts (about you) and then come out here and not practice well."

Rhule addressed the issue with players on the field after practice.

Ravens coach John Harbaugh said he was generally pleased with his team's performance, saying they competed at a high level “and made a lot of plays.”

He pointed to Baltimore's depth in the secondary as an area of strength as they prepare to head into an expanded 17-game regular season.

“It’s always a long season and it’s even longer this year, so you have to have guys who can step in and there is no drop-off," Harbaugh said. "You are always chasing depth — and in the secondary we have good depth.”

Quarterback Lamar Jackson looked solid Wednesday, completing several sidearm throws out to the flat while looking comfortable and confident in the pocket against Carolina's young defense.

Tight end Mark Andrews said Jackson is "more focused than he’s ever been.”

“He's an extremely talented quarterback with an arm," Andrews said. “He's slinging the rock and putting it right where it needs to be and he's locked in."

The teams will practice again Thursday at Wofford College before their preseason game Saturday night in Charlotte, North Carolina.

At this point neither coach has said if they'll play their starters. The Panthers rested all of their starters in their preseason opener, while the Ravens held out the vast majority of theirs.

Darnold hinted that he'd like to see some preseason action so he can get used to feeling the rush, escaping pressure and, if needed, the feeling of being tackled.

“Obviously I had experience with that the last few years," Darnold said with a laugh, referring to being sacked 98 times in 38 starts the past three seasons with the New York Jets. "It is important to a certain extent to be able to feel that before the season gets going, but it's on Coach Rhule.”

“He's protecting himself, he's making the right checks, he's taking responsibility when he does something wrong and he's protecting the football,” Rhule said. “... Every day he comes out here and doesn't turn the ball over and throw a silly 'hey I’m going to try to make a play' interception that is a positive to me.”

NOTES: The Ravens got a scare when defensive end Derek Wolfe went down midway through practice, forcing the action to be moved to the other end of the field while trainers attended to him. But Harbaugh said after practice it was nothing serious and the team escaped without any significant injuries. ... Panthers linebacker Denzel Perryman was back in pads for the first time in training camp but only participated in individual drills. ... Unlike Carolina’s two days of joint practices last week at Indianapolis, there was only one minor scuffle — and that was quickly broken up.