Passing on QB in Round 1 shows Panthers, Rhule have patience 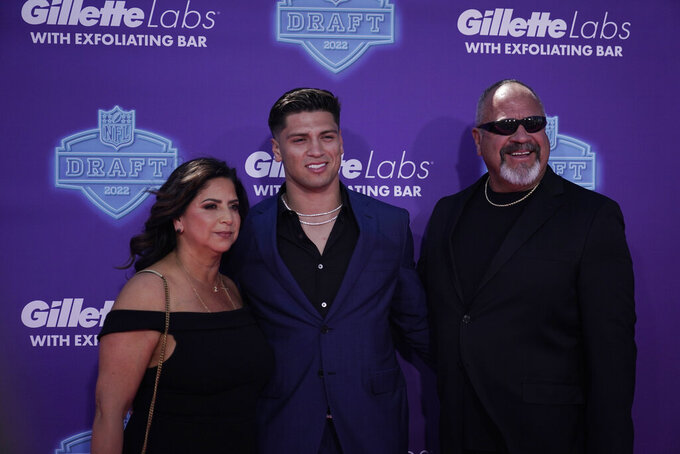 Mississippi quarterback Matt Corral poses on the red carpet with his parents Peter, right, and Liz before the first round of the NFL football draft Thursday, April 28, 2022, in Las Vegas. (AP Photo/Jae C. Hong )

Over the weekend, the Panthers stayed true to that plan.

Instead of reaching for a quarterback with the No. 6 overall pick, Carolina’s big three decision-makers — Tepper, general manager Scott Fitterer and coach Matt Rhule — selected offensive tackle Ikem “Ickey” Ekwonu from North Carolina State, filling a less flashy but equally as important need when it comes to building sustained success.

The move demonstrates that the Panthers' patience in Rhule may be a little longer than many believe after back-to-back five-win seasons and that Tepper’s statement last week of “I believe in Matt and he has my full support” has some real merit.

After all, if Rhule were pressing to keep his job the obvious move would have been to put a priority on finding a quarterback to replace the struggling Sam Darnold.

Instead, the Panthers waited as three QBs came off the board before trading up into the bottom half of the third round to get Matt Corral, whom they believe is a talented player with terrific leadership skills but one that clearly needs development.

Simply put, the Panthers aren’t going to rush Corral into a starting role.

“The transition from college to the NFL is really hard and over the last couple years, guys trying to make that transition in the first year trying to play right away hasn’t been very successful,” Rhule said. “When you look at the Tom Bradys, the Aaron Rodgers. If you think about it, it’s amazing. This is the only position in sports where the best players are over the age of 35. ... It’s amazing because it is about experience."

Rhule said the fact Corral played in Lane Kiffin’s spread offense at Mississippi could make the transition to the NFL even tougher.

“It’s going to take some time,” Rhule said. “Sometimes when you take those guys at six, the pressure is so great to put them on the field, they can get ruined. I think this is the most amazing opportunity for a guy that we think has first‐round talent, who has played at a high level, to come in here, grow his body, develop his body, learn under Sam, learn under P.J. (Walker) ... and learn the system from the ground up with (offensive coordinator) Ben (McAdoo). Whenever that time is that he is ready to play, he will get his opportunity.”

There's still a chance the Panthers could add a veteran quarterback via trade at the right price.

San Francisco's Jimmy Garoppolo and Cleveland's Baker Mayfield are two QBs on the market. But with the Panthers already on the hook for $18.9 million this season for Darnold, any potential deal involving Mayfield or Garoppolo would almost certainly require the other team having to pay a big portion of their contract to ease the salary cap burden.

Mayfield is set to cost $18.9 million and Garoppolo $26.9 million under the cap in the upcoming season.

“No, I would never put an absolute on anything,” Fitterer said when asked if the decision to draft Corral means the Panthers are out of the quarterback market.

The Panthers could wait to see if Mayfield or Garoppolo are released, thus saving money and draft picks. Or they could simply proceed as planned with Darnold, Corral and Walker as the team's quarterbacks this season while waiting for what is expected to be a strong QB draft class in 2023 to upgrade.

As for Corral, he's just happy to be in the NFL.

When he sustained a high ankle sprain in the Rebels' bowl game, he wondered how much it would impact his draft status. As it is, he was selected 94th overall, well below where most NFL draft analysts projected.

“My whole thing is to just go in there and compete,” Corral said.

As for beginning his career in a backup role, Corral didn't voice any objections.

“I really feel like everything happens for a reason and it is all God’s timing,” Corral said. “My approach to it is to be the best that I can be each and every day. My competitive nature is going to obviously want me to be the starter and I am going to do everything in my power that I can to do that. I am just going to put my best foot forward.”