Raiders DE Crosby on baby watch ahead of game vs Chiefs 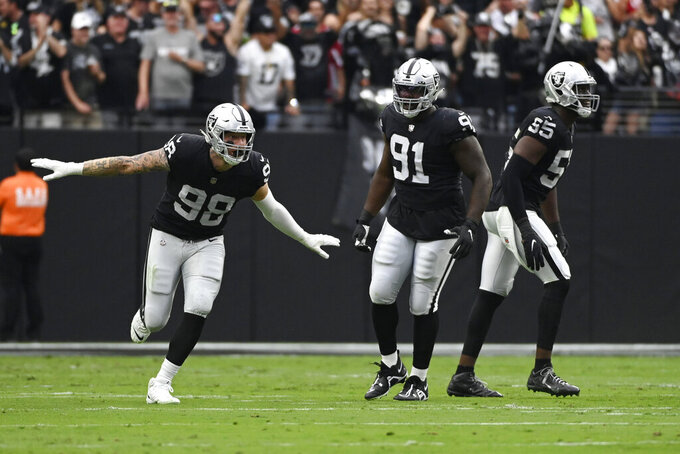 HENDERSON, Nev. (AP) — Las Vegas Raiders star defensive end Maxx Crosby looked as if he was in pursuit of a quarterback the way he sprinted out of the locker room with urgency on Wednesday at the team’s practice facility.

Everyone in the room — teammates, staff and media members — immediately came to attention.

False alarm. Crosby was just getting some water.

As the Raiders (1-3) prepare for what is the biggest game of their young season, Crosby remains on baby watch.

Fiancée Rachel Washburn’s due date with their daughter was Monday, a day after the Raiders earned their first win of the season, 32-23 over Denver. And with the first-place Kansas City Chiefs (3-1) on deck for a Monday night showdown in a key AFC West battle, Crosby’s attention has become a bit of organized chaos.

“I talked about it a little bit today, just being able to compartmentalize, whenever I step in the building I’m focused on my job 100%,” said Crosby, who leads the team with seven quarterback hits and has four of the Raiders’ five sacks this season. “We’re already staying ahead of it. I got people ready to call me whenever that is, so I’m not stressing about things I can’t control. She’s gonna be whenever she’s ready, so I’m just waiting.”

And while Crosby is trying to remain calm, albeit with anxiety sprinkled in, it hasn’t stopped his teammates from asking if his daughter’s arrived when he shows up at the facility, or first-year Josh McDaniels from offering advice on how to expedite Washburn going into labor.

A father of four, McDaniels said the organization will assist with a plan in place as well, in full support of the couple's first child.

“I’m on (baby) watch, too. I would like to have them have this celebration here before we travel,” McDaniels said with a smile. “I was trying to tell him the other day a few tricks that I’ve — I haven’t used them — but my wife has. Sitting on the ball, bounce and all that stuff.”

It’s something Crosby said his fiancee is already doing before the sun rises.

“Rachel can’t sleep right now; she’ll be out of bed like 5:30, 6 in the morning. I’m used to dogs being next to me, her next to me, and she was sitting downstairs on the yoga ball just bouncing in the living room and it’s still dark outside,” Crosby shared with a laugh. “I’m like, this needs to stop, it’s throwing me off. I’m just ready for the baby to be here.”

For now, whether he’s focused on sprinting in pursuit of Patrick Mahomes on Monday, or rushing toward the delivery room to be with Washburn for the arrival of their daughter, he’s prepared and confident for the best outcome.

“I just feel like the universe works in mysterious ways, and I feel like it’s gonna work out in our favor,” said Crosby, who is tied for third on the team with 27 combo tackles. “It’s gonna work out the way I want it to work out. I can’t control it, so I’m just staying positive.”