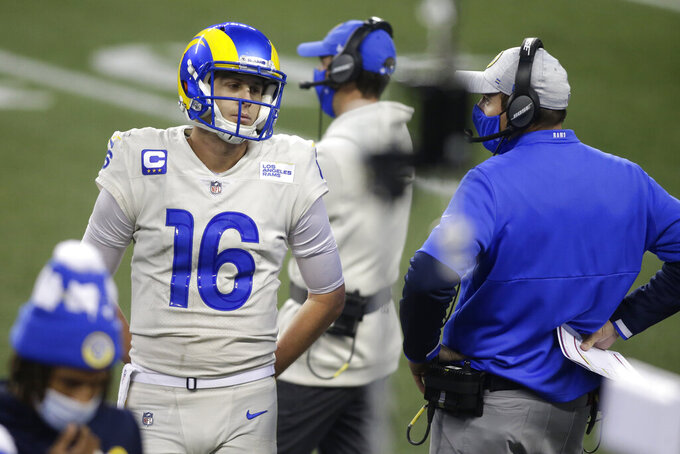 Los Angeles Rams quarterback Jared Goff (16) reacts on the sideline late in the second half of an NFL football game against the Seattle Seahawks, Sunday, Dec. 27, 2020, in Seattle. The Seahawks won 20-9. (AP Photo/Scott Eklund)

SEATTLE (AP) — Two weeks ago, Sean McVay and Jared Goff were rolling. The Los Angeles Rams had won four of five and were in control of the NFC West.

After two straight losses, the Rams have given away the division and potentially their spot in the postseason.

Los Angeles watched its chance at the division title disappear on Sunday in a 20-9 loss to the Seahawks. Seattle (11-4) claimed its first NFC West title since 2016, while the Rams now have a chance of missing the postseason altogether.

Los Angeles (9-6) will still make the playoffs with a victory over Arizona or a Chicago loss next week.

But the Rams may have to do it without Goff after he dislocated the thumb on his throwing hand in the third quarter. Goff popped the thumb back into place and did not miss a play, but doubts quickly emerged about whether he'd be able to play against the Cardinals.

“I’m not sure right now. I don’t want to speculate on that,” McVay said. “I know he battled, and I have a lot of respect for the toughness that he exuded today to be able to finish that game out.”

Even before the injury, it was another poor performance by Goff and the Rams offense. Goff made some baffling decisions, none worse than his decision to throw back across the middle of the field in the second quarter. Quandre Diggs intercepted the pass, costing the Rams an early scoring opportunity while Seattle’s offense was scuffling.

“I need to stop trying to make a play if it’s not there,” Goff said. “I think that’s what the result of today is: dumb. Just really dumb. I’m a lot smarter than that. I’m the quarterback of this team and I’m trying to score points, and it’s led to some dumb decisions.”

The Rams also failed to score on two attempts from the Seattle 1 in the third quarter. Goff was stuffed on a third-down sneak, and on fourth-and-goal Malcolm Brown was swallowed by Seattle’s defense.

Brown was the option because Darrell Henderson injured his ankle two plays earlier. Henderson appeared headed for the end zone but was tripped from behind by Jamal Adams.

“We obviously have got to finish drives. I made what I think is one of the worst plays I’ve had in my career when I threw that interception to Diggs,” Goff said. “And then we’ve got to score on the 1-yard line. Bottom line, it comes down to us on offense, and it comes down to me.”

The Rams (9-6) were held without a touchdown for just the third time since McVay’s arrival as head coach and continued a trend of not finishing drives. A week ago, the Rams drove into Jets territory on their final six drives, but scored only two touchdowns in their shocking loss to previously winless New York.

Against Seattle, the Rams had eight plays the entire game in the red zone.

McVay tried to shoulder the responsibility for the issues, but they may not be an easy fix, especially if the Rams have to turn to backup QB John Wolford, who has never taken an NFL snap in two years with the team, in Week 17.

“I’ve got to be better,” he said. “I have much higher expectations for myself. I’m not going to sit up here and make excuses. I see a lot better than I hear. Talk is cheap, and we’ve got to see the production. I don’t think I’ve done a good enough job for the standards, the expectations.”