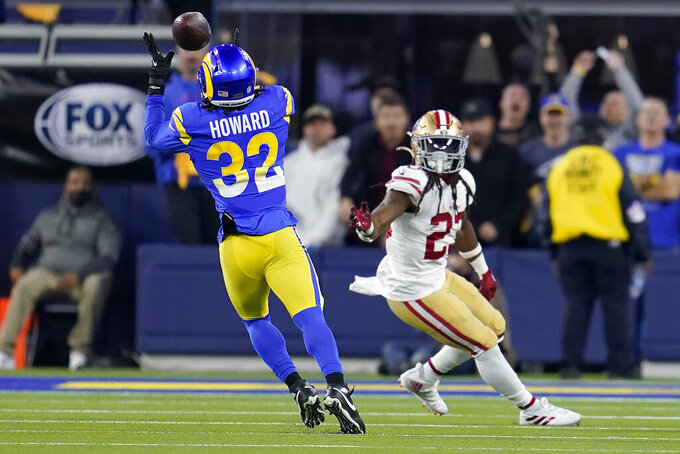 THOUSAND OAKS, Calif. (AP) — The Los Angeles Rams have waived Travin Howard, the inside linebacker who made the game-clinching interception in their NFC championship game victory just over four months ago.

The Rams announced the move Wednesday after the final on-field workout of their offseason program. Howard was scheduled to make $2.54 million this season after signing his restricted free agent tender last month.

Howard was a seventh-round draft pick who only saw game action for the Rams in two of his four seasons with the club, but he had a knack for big moments.

The biggest moment of all occurred Jan. 30 in the NFC title game when Aaron Donald pressured San Francisco's Jimmy Garoppolo into a poor throw and Howard intercepted it with 1:09 to play, sealing the Rams' 20-17 victory and a spot in the Super Bowl in their home stadium.

Howard spent much of his first NFL season on the Rams' practice squad, and the TCU product played largely on special teams in 2019. He missed the 2020 season on injured reserve, but he got a significant defensive role late last season, even starting the final two regular-season games and the Rams' first two playoff contests while rookie Ernest Jones was injured.

Howard played only on special teams in the Rams' 23-20 victory over Cincinnati in the Super Bowl.

The Rams expect newcomer Bobby Wagner and Jones to play most of their snaps at inside linebacker this season. They've also got several competitors for roles as a backup inside linebacker and on special teams, including undrafted rookie Jacob Hummel.