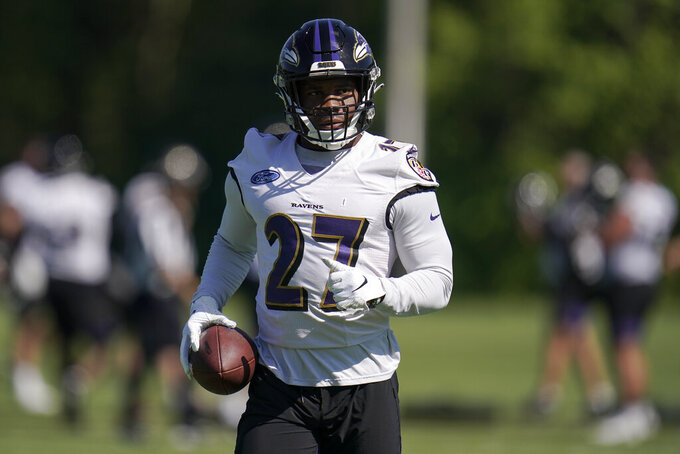 OWINGS MILLS, Md. (AP) — It took J.K. Dobbins only about a minute to mention where Pro Football Focus ranks him, something that is clearly giving him additional motivating these days.

“That chip on my shoulder is pretty big. Just little fuel like PFF ranking me 26th," the Baltimore running back said after practice Tuesday. “I don't think I'm 26th, but I love that. That gives me room to improve, and I've got people to prove wrong.”

After a solid performance as a rookie last season, Dobbins wants to keep improving, but if it's more respect he's after, he's in a tricky spot. The former Ohio State star averaged 6 yards per carry in 2021, providing plenty of production when given the chance. But the Ravens have a lot of balance in their top-ranked running game, and it's hard for any one running back to stand out.

So PFF ranked Dobbins 26th among running backs last month, while acknowledging he was quite good in limited opportunities.

Baltimore took Dobbins in the second round of the 2020 draft, and he ran for 805 yards last season. He received more carries toward the end, and at one point he rushed for at least one touchdown in seven straight games — the last six of the regular season and a playoff victory at Tennessee.

He still had only 134 carries in the regular season, 10 fewer than teammate Gus Edwards. That tandem combined for 1,528 yards on the ground.

Baltimore's rushing output, of course, is boosted significantly by quarterback Lamar Jackson, who led the team with 159 carries for 1,005 yards last season. Dobbins, however, was the leader in rushing touchdowns with nine, and there are other ways to get him the ball.

“I think J.K. and Justice specifically, that’s what they should be really good at,” Harbaugh said. “That should be a big part of their tool kit.”

Dobbins did receive double-digit carries in each of the final six regular-season games — although interestingly, his receiving numbers went down during that span.

Mark Ingram signed with Houston after 72 carries with the Ravens last season. That makes it even easier to envision Dobbins as Baltimore's No. 1 running back — even if he'll still have plenty of help.

No matter how his role evolves, Dobbins said his approach isn't changing.

"I'm going to come in and work hard," Dobbins said. "I am working like I didn't get drafted, like I'm not even on a team, like I am a guy coming off the streets, working for a spot.”

NOTES: Harbaugh said DE Derek Wolfe won't practice this week after a recent illness. “I think he had a pneumonia situation, which is obviously serious," Harbaugh said. “I don't know the level of it, but that was pretty recent.” ... As he prepares for his 14th NFL season, DE Calais Campbell was asked if he contemplates retirement. “I'm going to give everything I have this year, and then we'll re-evaluate once the season ends. But it's definitely something you think about,” he said. ”I used to always say when I was younger, I wanted to play 15. I didn't realize how hard 15 was going to be."