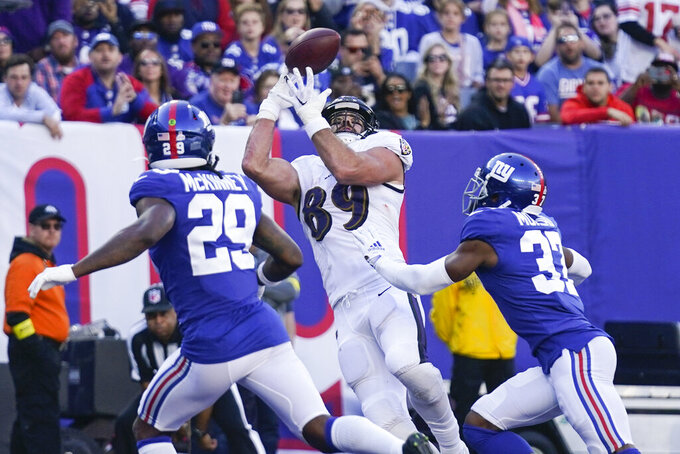 Baltimore Ravens' Mark Andrews (89) catches a pass for a touchdown in front of New York Giants' Xavier McKinney (29) and Fabian Moreau (37) during the second half of an NFL football game Sunday, Oct. 16, 2022, in East Rutherford, N.J. (AP Photo/Seth Wenig)

EAST RUTHERFORD, N.J. (AP) — If the Baltimore Ravens knew how to finish games, they would be undefeated.

Their problem is, they haven’t finished. They blew fourth-quarter leads against Miami and Buffalo in Weeks 2 and 4. The even numbers got to them again Sunday as they handed the New York Giants a 24-20 win, courtesy of two late turnovers by Lamar Jackson.

The loss left the Ravens at 3-3 and tied atop the AFC North with defending AFC champion Cincinnati. Pittsburgh and Cleveland are a game behind at 2-4.

It’s not a bad position but the Ravens know it could have been much better.

“I think the only frustration I sense is that we know how good we can be, and we know that a lot of these issues are self-inflicted,” tackle Ronnie Stanley said. “When you are your own biggest enemy, I think that’s really something that can frustrate anyone. We know how much talent we have on this team, and we’re going to pull it together.”

New York pulled within 20-17 on a touchdown pass by Daniel Jones to rookie tight end Daniel Bellinger. On the Ravens’ subsequent possession, Jackson sneaked 2 yards for a first down at his own 46 with 3:04 to play. From there, Baltimore would have had a chance to drain the clock.

However, the Ravens were flagged for an illegal formation, a penalty Stanley said resulted from having too many men on the line of scrimmage.

Pushed back to the 40 and facing a third-and-5, rookie center Tyler Linderbaum snapped the ball prematurely, sending it past Jackson. He picked it up 13 yards behind the line of scrimmage and threw a pass toward fullback Patrick Ricard. Giants safety Julian Love came up with the interception — New York’s first of the season — and returned the ball the the Ravens 13.

A pass-interference penalty against Marcus Peters in the end zone gave New York a first down and Saquon Barkley scored from the 1 on the next play for a 24-20 lead.

Jackson was sacked on the Ravens’ second play from scrimmage on the ensuing series by rookie linebacker Kayvon Thibodeaux, the No. 5 pick overall. Defensive lineman Leonard Williams recovered at the Baltimore 13.

“We stopped ourselves a lot — a lot of missed opportunities out there, especially in the red zone,” said Jackson, who threw for 210 yards and a TD and ran for 77 yards on seven carries as the Ravens outgained New York 406 yards to 238.

“I feel like we should’ve put more points up,” Jackson said. “Little hiccups here and there. We’ve got to fix those, because that’s making the difference in our game.”

Jackson wasn’t alone in making mistakes. Tight end Mark Andrews, who caught a 12-yard TD pass early in the fourth quarter for a 20-10 lead, failed to corral a 5-yard pass that was deflected before it hit him in the end zone in the third. That forced Baltimore to settle for one of the two field goals by Justin Tucker, who also hit the upright and missed a 58-yard try in the first half.

Defensive lineman Calais Campbell said the Ravens know what they are capable of doing and there was no need to panic.

“It’s early in the season. We’ve made some mistakes, let some ball games slip away, but we can use it as fuel to get better, to keep fighting, to not relax and to find a way to improve,” Campbell said.

Coach John Harbaugh said all the Ravens can do is accept responsibility for the mistakes.

“Six games into the season, we’re in good position big picture-wise,” he said. “Let’s get to where we can be and where we need to be, where I think we all can see we should be. It’s our responsibility to do it, though, and we have to go get the job done.”