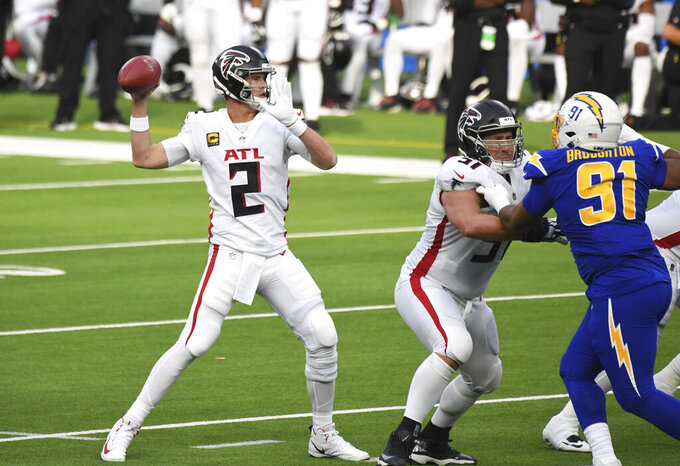 Atlanta Falcons quarterback Matt Ryan passes against the Los Angeles Chargers in the first half of an NFL football game in Inglewood on Sunday, Dec. 13, 2020. (Keith Birmingham/The Orange County Register via AP)

ATLANTA (AP) — There are plenty of reasons why the Atlanta Falcons have endured three consecutive losing seasons, but quarterback Matt Ryan has generally been one of the consistent bright spots.

That was hardly the case in a 20-17 loss in Los Angeles on Sunday when Ryan threw three interceptions, the last two costing the Falcons a chance to take a late lead. Both passes were to his right side, short attempts to Hayden Hurst and Calvin Ridley that gave the Chargers an easy path to the ball in Los Angeles territory.

At 35, Ryan insists he’s still the same player who was the NFL MVP in 2016. But he has eight picks in his past six games, and an intentional grounding penalty cost the Falcons a chance to score early in the fourth quarter.

“No, I have plenty left in the tank,” he said. “I just have to play better. Unfortunately, stuff like this happens sometimes in professional sports and you’ve just got to grind through it and find a way to be better. I’m committed to that and certainly believe I’ll play better next week.”

There was no cause to pin Ryan’s performance on poor protection. Despite missing two starters — left guard James Carpenter and right tackle Kaleb McGary — on the line, Ryan was sacked twice and hit six times. Those are numbers he could live with as Justin McCray and Matt Gono filled in for Carpenter and McGary.

“My body feels great,” he said. “I feel like I’m fresh and in a good spot. I just haven’t played as well as I would’ve liked and that stuff happens. I’m a big believer in process, so you learn from these games where you don’t play your best. You try not to make the same mistakes again and move forward and believe when you’re in those positions again you’re going to create different outcome.”

Ryan’s first pick came on a third-quarter attempt to squeeze a ball against double coverage into Ridley in the end zone. The Chargers answered by marching 80 yards in 13 plays to tie it at 17.

Ryan, who moved past Peyton Manning for the most career yards passing through 13 seasons, said that mistake was one he could live with. But the third interception, thrown to Ridley on the outside, was ill advised.

“That’s on me,” Ryan said. “I’ve got to make a better throw and put it high and away on the sideline and give Cal a chance. Just a poor throw.”

Ridley surpassed 1,000 yards receiving for the first time in his three-year career. With Julio Jones sidelined again by a hamstring injury, Ridley stepped up again to give Ryan a reliable target.

Ridley finished with eight catches for 124 yards and was targeted 12 times, including a 39-yard TD catch on Russell Gage’s throw from the wildcat formation.

In a similar scenario to those that doomed the Falcons in losses to Dallas, Chicago and Detroit, the defense allowed a long completion to set up the winning field goal. Safety Keanu Neal was defending on the 25-yard pass from Justin Herbert to Tyron Johnson.

“We got beat man to man,” interim coach Raheem Morris said. “We were in a two-man, two-high defense. We played underneath coverage and the guy made a nice outside breaking route. We got beat on a long play. We can’t let those things happen, either. We can’t lose those battles and win a football game on the road.”

Rookie cornerback A.J. Terrell was beaten on a crossing route in the end zone for the Chargers’ first touchdown, but otherwise played well. Terrell routinely draws the No. 1 receiver in man coverage and is getting better each week. Terrell had 13 unassisted tackles to lead the defense and added a pass breakup and a forced fumble.

Todd Gurley is a shadow of his former self and looks to be in the last year of his career. In his last seven games, Gurley has averaged 2.7 yards per carry. He ran the ball just six times with a long run of 8 yards. Morris said Monday that Gurley is still the No. 1 running back ahead of Ito Smith, who ran 11 times for 42 yards.

Morris said Jones’ season is not in doubt and didn’t rule out the seven-time Pro Bowl receiver returning this week. ... Defensive tackle Marlon Davidson injured his knee in the third quarter and didn’t return.

97 — The total tackles for linebacker Foye Oluokun, who has emerged as a dependable force alongside linebacker and defensive captain Deion Jones.

Morris gave the team Monday off after the long road trip. The Falcons will reconvene Wednesday and start prepping to face Tampa Bay at home Sunday.