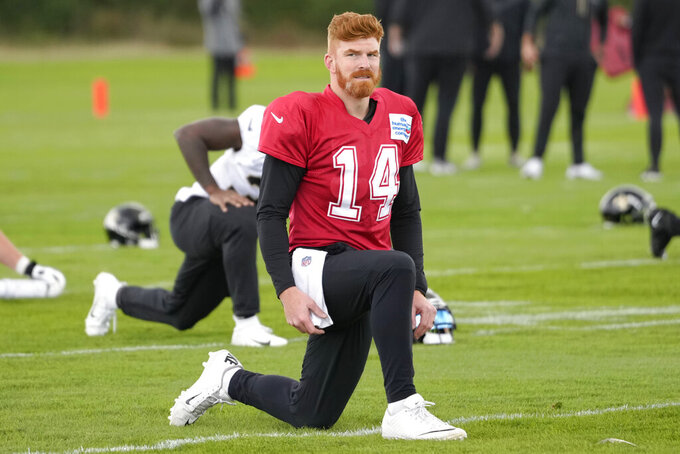 New Orleans Saints quarterback Andy Dalton during an NFL practice session at the London Irish rugby team training ground in Sunbury-on-Thames near London, Wednesday, Sept. 28, 2022 ahead of the NFL game against Minnesota Vikings at the Tottenham Hotspur stadium on Sunday. (AP Photo/Kirsty Wigglesworth)

LONDON (AP) — Saints quarterback Jameis Winston will not play in New Orleans' game against the Minnesota Vikings in London because of a back injury, the team confirmed on Saturday.

Andy Dalton is set to start Sunday at Tottenham Hotspur Stadium in the NFL’s first international game of the season.

Winston's status was downgraded from doubtful to out. The team signed quarterback Jake Luton to the active roster from the practice squad.

On Friday, coach Dennis Allen said: “Our plan right now is to have Andy ready to go."

In other moves, the Saints waived fullback Adam Prentice and elevated tight end J.P. Holtz and running back Latavius Murray from the practice squad to the active roster.

Winston this week said he was preparing to play against the Vikings, though he didn't practice. He has thrown for 858 yards with four TD passes and five interceptions in three games. He has completed 63.5% of his passes.

Dalton started nine games for the Cowboys in 2020 after Dallas starter Dak Prescott’s season-ending ankle injury. Dalton completed 64.9% of his passes that season, throwing for 2,170 yards with 14 TDs and eight interceptions.

Last season, Dalton appeared in eight games and made six starts for the Chicago Bears, completing 63.1% of his passes for 1,515 yards with eight touchdowns and nine interceptions.