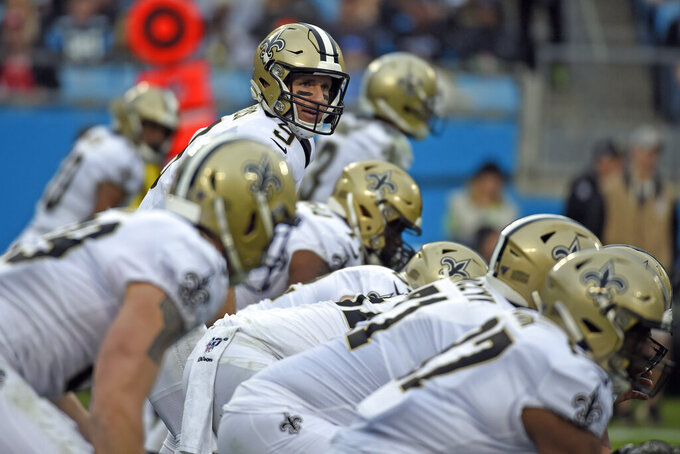 New Orleans Saints quarterback Drew Brees (9) lines for a play against the Carolina Panthers during the first half of an NFL football game in Charlotte, N.C., Sunday, Dec. 29, 2019. (AP Photo/Mike McCarn)

NEW ORLEANS (AP) — For the second time since 2011, a Saints team coached by Sean Payton and quarterbacked by Drew Brees has finished a regular season 13-3, only to learn that was not good enough to secure a top-two playoff seed in the NFC and a first-round bye.

In both cases, remarkably, New Orleans was edged out by the same two franchises: Green Bay and San Francisco.

The Saints' 2011 postseason ended in the divisional round in San Francisco in one of the most thrilling and heartbreaking playoff contests New Orleans fans have endured. It had multiple late lead changes before the Niners drove for a winning score in the waning seconds.

Now the Saints once again try to do something the franchise has never managed — advance to the Super Bowl by winning three NFC playoff games. They'll open at home against Minnesota (10-6) on Sunday in the wild-card round.

“Obviously other people kind of decided our fate as far as our seeding,” linebacker A.J. Klein said Monday, referring to the Saints needing either Green Bay or San Francisco to lose in Week 17 to earn a bye. “But I will say that we control our destiny.''

As it turned out, moments after the Saints completed a 42-10 romp in Carolina on Sunday, Green Bay finished a comeback victory over Detroit with a last-second field goal. Later Sunday night, Seattle came excruciatingly close to beating the Niners when a Seahawks fourth-down pass was stopped an inch or so short of the goal line in the final seconds.

“Obviously we would have liked Seattle to win, to give us a bye,” said Klein, who returned an interception for his first-career touchdown on Sunday. "This is just the way it's written for us and it's part of our journey this year.”

Since the NFL went to a postseason format with six playoff teams in each conference in 1990 — with the top two division winners getting byes — 12 teams have advanced to the Super Bowl.

The Saints sound confident they can be the 13th.

“We finished the season strong and I know that this team is fired up and ready to go into these playoffs strong,” right tackle Ryan Ramzcyk said. "As far as playing our best football, I think there's still a lot more to be had, but I think we are in a good position headed into the playoffs.”

Payton, too, said his team was “excited” to play this Sunday. The coach also sounded pleased by his team's balance of swagger and sense of urgency to identify and clean up potential weaknesses.

“Overall the team kind of heads into this postseason with some confidence based on how we've been playing,” Payton said. "And yet I think they understand the type of tournament this is.”

The passing game is about as efficient as it's been all season. Brees has passed for nearly 1,200 yards and 15 TDs in his past four games and he's not just relying on NFL leading receiver Michael Thomas. Tight end Jared Cook has looked more like the receiving threat the Saints expected and finished tied with Thomas for the team lead in touchdown receptions with nine. Tre'Quan Smith has become a more reliable target the longer he's been back from an ankle injury that sidelined him five full games and parts of two others. He's caught three touchdown passes in the past four games. Meanwhile, third-string QB Taysom Hill, a utility player known in New Orleans as the Saints' “Swiss Army knife,” caught his sixth touchdown pass of the season in Week 17.

The Saints ended the season as the sixth-most penalized team in the NFL and their minus-323 net penalty yards ranked second worst.

Cornerback Janoris Jenkins intercepted a pass in the end zone in just his second game since being claimed off waivers by the Saints. Combined with his four interceptions while with the New York Giants, Jenkins finished with a career-high five picks this season. No other Saints player had more than four in 2019.

Receiver Ted Ginn had one catch for 10 yards on Sunday, giving him 10 catches for 125 yards and one TD in his last eight games combined.

The Saints played without three starters in the secondary in their regular season finale: cornerback Eli Apple (ankle) and safeties Vonn Bell (knee) and Marcus Williams (groin). Their status for the playoff opener remains uncertain.

8 — Total turnovers committed by the Saints this season, an NFL record low for a season.

The Saints play the Vikings in the playoffs for the second time in three seasons. The last time, New Orleans lost on a 61-yard touchdown pass as time expired that became known as the Minneapolis Miracle. This time, the game is in the Superdome.