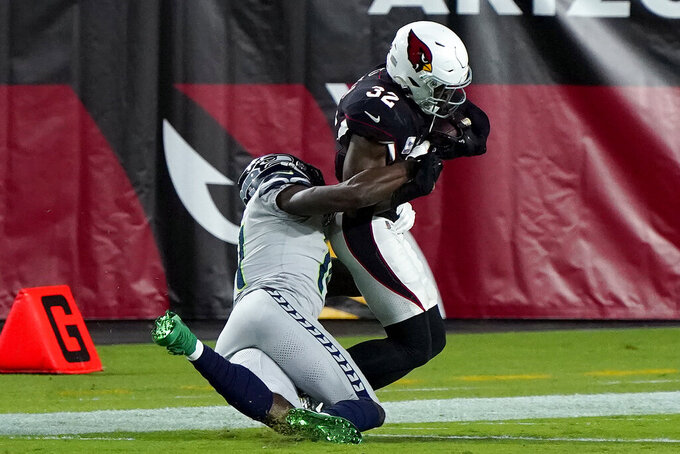 RENTON, Wash. (AP) — DK Metcalf doesn’t often take to Twitter to express an opinion. Usually the Seattle Seahawks wide receiver is highlighting a teammate or the performance of his team on the social media platform.

Which made his tweet of earlier this week a little odd.

“My Name IS NOT DJ METCALF,” Metcalf tweeted on Wednesday night.

Asked to explain a day later, Metcalf made a valid point. With the way he’s playing in his second season, people should be getting his name correct.

“Throughout the years, I have had so many reporters reference me as DJ Metcalf. And it is really starting to get to me now,” Metcalf said. “I can understand if you really don’t know me, but right now, I mean, I think I’m making a name for myself.”

Yes, Metcalf is making a name for himself and quickly moving into the conversation among the best wide receivers in the NFL. He’s coming off the best game of his young career with 12 catches for 161 yards and two touchdowns last week against San Francisco.

It was the latest highlight of a breakout season for the second-year receiver.

Two weeks ago, Metcalf had the NFL buzzing not for a reception but for a different kind of catch when he chased down Arizona’s Budda Baker on an interception return and prevented a touchdown.

That moment came two weeks after he caught the game-winning touchdown in the final seconds against Minnesota. He also had a game-winning TD catch against Dallas.

Metcalf is tied for the league lead in touchdown receptions with seven. He’s second in yards per reception (18.9) and fourth in yards receiving (622).

“This is a one-of-a-kind player. He’s got uniqueness about him that I wouldn’t compare him to anybody,” Seattle coach Pete Carroll said.

Before the season began, Metcalf seemed poised for a big year, whether it was the way he finished his rookie campaign or the time he spent in the offseason living with Seattle quarterback Russell Wilson to continue developing their chemistry.

Metcalf has benefited from a Seattle offense that has allowed Wilson’s arm to be the engine for its success. The Seahawks have the top scoring offense and third-best passing offense in the league at the midpoint of the season.

“I think the cool part is to have that quarterback-receiver tandem is really special,” Wilson said.

Yet it seems on a weekly basis there has been another highlight to tell the story of Metcalf’s season. For all he did in catching 12 passes last week against the 49ers, the most memorable image might be a ball he didn’t catch.

In the fourth quarter, Metcalf had a slant pass on third-and-9 get broken up on a big hit by San Francisco’s Marcell Harris. While Metcalf slammed his fist into the air, frustrated for not catching the pass, Harris crumpled on the ground getting the worst of the collision. Metcalf barely flinched.

“I caught the ball and he knocked it out of my hands. That’s pretty much why I was mad,” Metcalf said. “I think that was like the first time I really seen somebody bounce off of me and they got hurt. It kind of made me feel good after I knew that he got up and he was all right.”

This week’s challenge is a Bills secondary that is in the top half of the league at stopping the pass and has allowed only two wide receivers to top 100 yards this season. Seattle’s counter is that not just Metcalf is having a big year. Tyler Lockett is on pace for career highs in receptions, yards and touchdowns as well, and is two weeks removed from having 15 catches against Arizona.

“They really have to pick their poison because if they’re going to try to take away me, Tyler can pop off for 200 yards or (David Moore) can pop off for 100 yards,” Metcalf said. “It just really comes down to picking your poison and who do you want to get defeated by that game.”