Seahawks learn what life is like without Russell Wilson 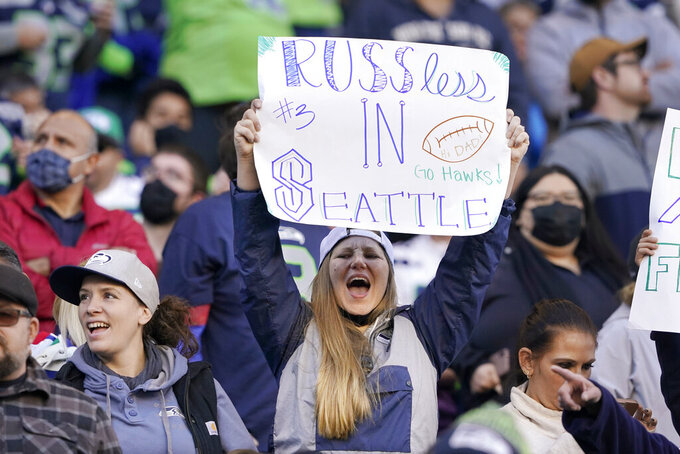 A Seattle Seahawks fans displays a "RUSSless in Seattle" sign, referring to the team's injured quarterback Russell Wilson, during the second half of an NFL football game against the Jacksonville Jaguars, Sunday, Oct. 31, 2021, in Seattle. (AP Photo/Ted S. Warren)

SEATTLE (AP) — The question always lingered in the backs of minds, even as his durability withstood countless hits and his competitiveness refused to let him be a spectator.

What would it be like for the Seattle Seahawks to be without Russell Wilson?

For the past three weeks, the Seahawks have lived that reality while Wilson has been sidelined with a finger injury on his throwing hand that required surgery. Seattle went 1-2 during those three games and sits at 3-5 at its bye week.

It has been a challenging stretch filled with missed opportunity and a realization that Seattle probably would have one, possibly two more wins if Wilson had been healthy.

And in the bigger picture of where Seattle goes beyond this season, it may have reinforced Wilson’s overall importance — unless the Seahawks are ready to embark on a significant rebuild.

That guy could be ready to return after Seattle’s bye. Wilson had the pin from his surgically repaired finger removed the day after Seattle’s 31-7 win over Jacksonville following a three-game losing streak.

While it’s not a certainty, the pin being removed less than a month after surgery raises the chances Wilson could be able to play in Week 10 at Green Bay.

Wilson wasn’t great, but wasn’t bad before he was injured in Week 5 against the Los Angeles Rams. One could argue that Geno Smith played better in relief of Wilson in the loss to Rams.

But in losses to Pittsburgh and New Orleans, where Seattle failed to capitalize on late opportunities, the Seahawks felt Wilson’s absence because those late moments is where he has been elite throughout his career.

That’s not a knock on Smith, although he made key mistakes late in both losses. But as Seattle coach Pete Carroll said on his radio show, “the teams that played us without Russell were fortunate.”

Asked later about some of the lessons to take from Wilson’s absence, Carroll reiterated it can’t all be on the quarterback.

“I think it was really obvious to everyone how team oriented this game is and how everybody has to play their part,” he said. “We needed to support our quarterback and do the things to give him a chance to get comfortable and function.”

During his time on injured reserve, Wilson has remained engaged with his team. He has attended practices and meetings. He has gone through full pregame routines — albeit without making a throw — and been a voice for Smith on the sideline.

"I think mentally he’s won when it comes to that battle every single day.”

While the short-term focus will be on how quickly Wilson can get his finger ready to throw, the past few weeks can also be viewed as a look into Seattle’s possible future.

There were clearly signs of relationship strain last offseason, enough so that the idea of Wilson playing elsewhere was not farfetched. Whether it was his comments after the Super Bowl or his agent confirming teams he might consider being traded, there was smoke surrounding the idea of a divorce between the parties.

In reality, it wasn’t likely to happen last offseason. But this year it becomes more of a possibility, mostly from a salary cap perspective. Wilson is due $51 million in the 2022-23 seasons and the Seahawks would face a manageable $26 million in dead money against the salary cap.

And the player that could land Seattle the most draft capital right now is Wilson.

Of course, if Wilson returns and Seattle makes a late-season run to yet another playoff berth, that talk about his future being elsewhere could become moot.

“Seeing the game without being in a game," Lockett said, "can also do a lot of wonder for you, too, as a person and a player when you come back.”