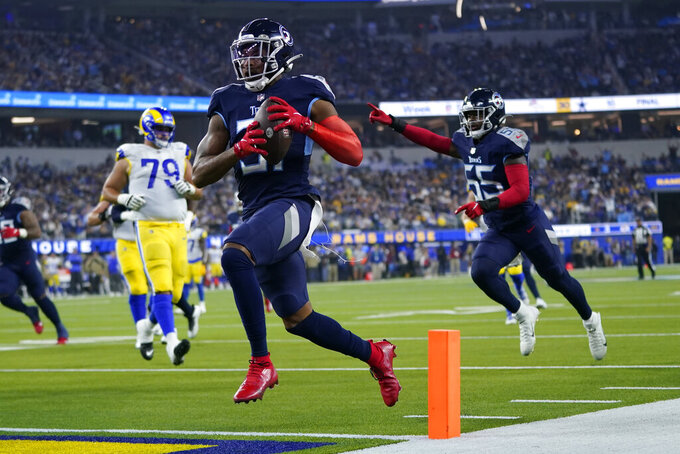 Tennessee Titans free safety Kevin Byard scores a touchdown after grabbing an interception during the first half of an NFL football game against the Los Angeles Rams Sunday, Nov. 7, 2021, in Inglewood, Calif. (AP Photo/Ashley Landis)

Bradley Chubb played in just one game this season before undergoing ankle surgery that is expected to keep him sidelined until later this month. But the Denver Broncos outside linebacker is still contributing to the community.

Chubb, the Broncos and the NFL Foundation have committed $30,000 to Denver Public Schools Foundation’s A to Z fund to support education equity.

“Everyone needs to have an equal playing field, whether it comes to funding or gaining opportunities. It’s about everyone being able to grow together,” Chubb said. “Education is a huge part of a child’s growth. I remember when I would go to school, I would be excited to see my teachers and classmates. I want the same for these kids. I want everyone to have a fun, safe learning environment.”

The donation made by the Chubb Foundation, the Denver Broncos Social Justice Fund and the NFL Foundation’s Player Matching Social Justice Grant Program, will enhance classroom learning and assist in providing equal opportunities for students district-wide to participate in enrichment opportunities.

The A to Z Fund provides grants to schools for programs and activities that aren’t part of schools’ budgets. The donations are used for educational materials, athletic equipment, enrichment classes, competition fees and field trip expenses, among other things.

Two of the NFL’s initial woman position coaches face off Sunday as the Washington Football Team hosts the Tampa Bay Buccaneers in a Salute to Service game.

Bucs assistant coach Lori Locust and her Washington counterpart, Jennifer King, already have met up. They discussed moving through the ranks to become “Women of First,” and they shared their stories with two women military veterans, Yencris Baez and Vanessa Thomas – also such firsts — in a video.

Released by USAA, the video how each of the women achieved success in their respective careers in the traditionally male worlds of the military and the NFL.

“To me, it’s never been a gender specific quest,” says Locust, Tampa Bay's assistant defensive line coach. "It’s been I want to be a good coach, I want to be viable, I want to be contributory – to a staff, to a team, to a winning season.”

The foursome quickly identified parallels between the military and the NFL. And their main takeaway is that women have a rightful place in both arenas.

“Representation matters and is so important for continuing forward progress," adds King, the assistant running backs coach for Washington. "As women in the NFL, it’s important that we put in the work and do the best job we can for the young women who look up to us and will come after us.”

Hall of Fame linebacker Dick Butkus and five-time Pro Bowl center Bart Oates have teamed up with the NFL Alumni Association to promote a wellness challenge because more than half of retired players are affected by obesity.

Butkus said he needed a quintuple bypass surgery 20 years ago because he developed heart problems from being overweight.

“I had a heart scan and 24 hours later I was under the knife,” Butkus said on the AP Pro Football Podcast. “When my surgeon came for my first meeting and I was awake, I said: ‘What’s going on here? I felt fine. No signs of anything with the heart.’ And he says: ’The best way I can explain it to you is that you had one foot in the grave and one on a banana peel because in 30 days it would have been over. ... So anything I can do to help people with that, I’m willing to do it because I’ve experienced it.”

Oates, a three-time Super Bowl champion with the Giants and 49ers, said the campaign is a positive message for former players and all people.

“Let’s create a positive discussion about obesity,” he said. “It’s not always just diet and exercise, it’s not about your body image. There’s other factors people don’t really think about as far as stress and sleep and genetics and hormones that affect our weight and whether there’s obesity issues. And so there’s a lot more help just beyond diet and exercise that people can take advantage of. We’ve really dedicated a lot of resources.”

Titans safety Kevin Byard has been hearing people mispronounce his name most of his life. Being the only player in the NFL this season to return a fumble for a touchdown and scoring off an interception hasn’t helped.

TV announcers repeatedly butcher Byard’s name despite the Titans having a pronunciation guide to help anyone unsure of how to say the six-year NFL veteran’s name. So far, the botched pronunciations don’t bother Byard.

“Not at all,” Byard said. “I mean, ever since I was younger ... I’ve usually never had a coach say my last name right the first time, so it doesn’t bother me at all. I don’t really care about that type of stuff. I just go out and make plays.”

Most people try to put an extra “y” into his name. One coach called him “Kevin Bynard,” and he’s heard himself called “Bayard.”

“I don’t really know where they get it from,” Byard said. “I don’t know if it’s like the teleprompter they just reading too fast. I don’t know.”

The Titans’ suggested pronunciation lists BY-urd as a helpful tip. Byard, who has five interceptions and one fumble recovery this season, believes people will figure it out sooner or later.

“The more plays I make, I guarantee you they’ll start pronouncing my name right the first time,” Byard said.

Sunday’s Seattle-Green Bay game will be the featured game on CBS instead of Fox, which carries most of the top NFC matchups.

CBS has this week’s doubleheader and will air the game in the 4:25 p.m. EST late afternoon window. Instead of the game going to approximately half the country on Fox at 1 p.m., the cross-flex means the game will go to most of the nation in a better time spot. CBS’ other game in the late afternoon spot is Philadelphia at Denver, also usually a Fox match.

The league introduced cross-flexing in 2014, which allows a certain number of all-NFC games to air on CBS and all-AFC matchups on Fox. One caveat is that an equal number of games must be cross-flexed – meaning if CBS airs five games originally meant for Fox, then Fox gets five all-AFC games that would have aired on CBS.

And it has nothing to do with fatherhood.

Teammates are now calling him “Senior” because, well, he essentially looked like Buffalo quarterback Josh Allen’s daddy in Jacksonville’s 9-6 victory against the Bills on Sunday.

Jacksonville’s Allen finished with a career-high eight tackles, including two sacks, got his first NFL interception and recovered a fumble. He was selected the AFC’s defensive player of the week Wednesday and got slimed leaving practice Thursday after being chosen Nickelodeon’s “NFL Slimetime NVP.”

When Camryn Bynum got the call last spring that he was going pro, he celebrated the news by draping a Minnesota Vikings flag over his shoulders and doing a backflip into the lake next to the cabin where he held his draft party.

“Right before breakfast my coach called me, probably 10 minutes after I woke up, and told me, ‘You’re up today,’” recalled Bynum, a fourth-round selection by the Vikings out of California.

Bynum appeared to be well-prepared, despite spending most of his time in practice at the other safety position as the backup to Xavier Woods. He also played cornerback in college, and his versatility is one of the reasons why the Vikings were drawn to draft him. Against the Ravens, Bynum returned an interception of 2019 NFL MVP Lamar Jackson 27 yards and also became one of five players in the last 21 years in the league to get at least 12 tackles and one interception in his first career start. The last player to do so was Uani’ Unga for the New York Giants in 2015.

“Just through this whole process, it’s been a privilege to sit behind Harry and ‘X’ and to be able to learn so much from them,” Bynum said this week. “I didn’t have any nerves knowing that I had put in all the preparation and work that I possibly could for whenever my name was called.”