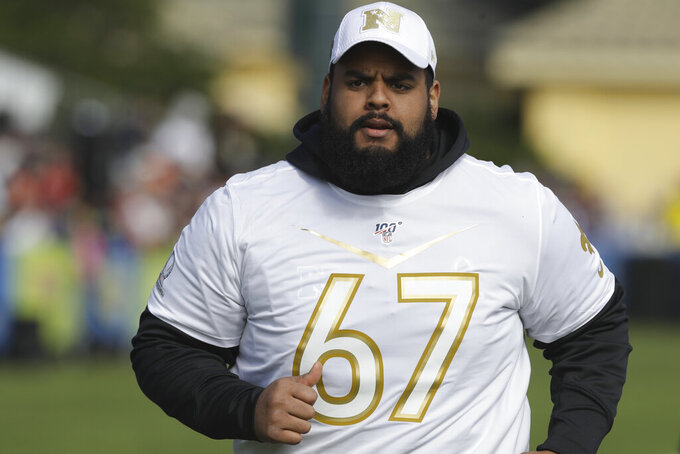 NEW YORK (AP) — Offseason shopping is still in full swing in the NFL.

Even with the status of the upcoming season uncertain because of the coronavirus pandemic, teams continue to tinker with their rosters by adding players they hope will help them win — whenever or if they actually play.

Virtual workouts are being held all around the league, with some facilities beginning to reopen but still closed to coaches and players. General managers work the phones and chat with agents and unsigned players through video conference calls.

Other big names remain unsigned and could end up filling major needs for someone. Here's a look at some still waiting to find the right fit — or, in some cases, for quarantine restrictions to be lifted so they can make in-person visits before they or the teams make a decision:

The former Panthers star missed all but two games last season because of a foot injury and was released in March after Carolina failed to find a trade partner. Newton is 31 and five years removed from his NFL MVP season. He's been posting workout videos on Instagram to show he's now healthy. Where he eventually ends up — likely as a backup, at least at first — remains an intriguing story line of the offseason.

Many believed Clowney would be snatched up quickly by a team desperate for a pass-rushing presence. And for big-time bucks. Instead, the 2014 No. 1 overall draft pick is still unsigned two months later and potentially looking at a one-year, prove-it deal. A return to Seattle isn't out of the question.

After making the last three Pro Bowls, Warford was cut by New Orleans earlier this month; the Saints drafted Cesar Ruiz in the first round as his obvious successor at right guard. New Orleans also saved $7 million on the salary cap by releasing Warford. He immediately became the most enticing offensive lineman on the market, and will likely find a starting spot.

Minnesota's four-time Pro Bowl pick has 74 1/2 career sacks, including 26 1/2 the past three seasons, but he exercised his option to void the remaining three years on his contract. Griffen is reportedly being patient and waiting until he can take in-person visits. He's 32, but showed last season he has plenty left.

Ryan, 29, played his first four NFL seasons with New England, helping the Patriots win two Super Bowls before signing a three-year, $30 million contract that included $12 million guaranteed with Tennessee in 2017. He set career highs with 105 total tackles, 18 passes defensed and 4½ sacks to go along with four interceptions last season, but Tennessee chose to move on.

Reid was released in March after two seasons in Carolina, despite posting career highs with 124 total tackles and four sacks. He signed a three-year, $22 million contract extension before last season, but the new-look Panthers saved $8 million on the cap this year.

The big man wants to keep going. Peters turned 38 in January and reportedly has told friends he has his sights on playing into his 40s. He had arthroscopic knee surgery that caused him to miss three games in the middle of 2019, but bounced back and was his usual solid self the rest of the way.

It appeared Dennard had a new home early in free agency when he signed with Jacksonville, but the three-year, $13.5 million deal fell through. The former Bengals slot cornerback, a 2014 first-round pick, never really lived up to his lofty draft status in Cincinnati. He was limited to nine games last season after having offseason knee surgery.

Arguably the Jets' most consistently solid offensive lineman during his three seasons in New York, Beachum, who turns 31 next month, has seen a complete overhaul on the O-line by GM Joe Douglas. Beachum's fate with the Jets was sealed after they drafted Louisville left tackle Mekhi Becton with the No. 11 overall pick. He's still a more-than-serviceable starter.

Freeman, one of the NFL's most productive backs during the 2015 and ‘16 seasons, rushed for 11 touchdowns and over 1,000 yards each year. He hasn’t been quite the same player since, with various injuries limiting him to two games in 2018 and only 656 yards rushing and two TDs in 14 games last year. Atlanta released him in March, and there are reports he might be willing to sit out this season or even retire if no team meets his hefty contract request.