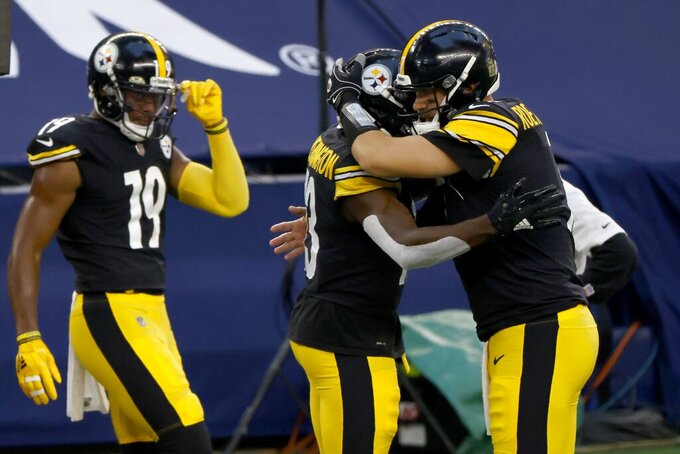 PITTSBURGH (AP) — The Pittsburgh Steelers' pursuit of a perfect season has a new opponent in COVID-19.

Steelers coach Mike Tomlin said Tuesday it's possible Roethlisberger and Williams — who have a combined 25 years of experience between them — could rejoin the team for its walkthrough practice on Saturday and play on Sunday if they are cleared in time.

“They will simply work remotely and sharpen their swords (virtually),” Tomlin said. “Really, it will probably give their bodies an opportunity to get some much-needed rest, and we’re optimistic those guys will be their normal selves if given an opportunity to play this weekend.”

The players who are able to practice will work within the constraints of the league's “intensive” protocols. That includes holding all pre and post-practice meetings remotely as well as requiring players to use the weight room and other services in a rotation to limit the number of people in one room at one time.

McDonald, however, will not be available. The team was notified of McDonald's positive test on Monday morning, hours after the Steelers beat the Cowboys to improve to 8-0 for the first time in franchise history.

McDonald immediately self-quarantined. McDonald missed Friday’s practice with an “illness” according to the team’s injury report, but traveled to Dallas with the team and played 24 snaps total against the Cowboys, 20 on offense and four on special teams.

Tomlin defended the decision to play McDonald, saying he passed a COVID-19 test after missing practice. The test that revealed the eight-year veteran's diagnosis was administered on Sunday, with the result not available until after the game.

“As long as he is negative and not showing signs of COVID, he’s able to travel, and (McDonald) was and we did,” Tomlin said. “We don’t overanalyze it that way.”

McDonald and Roethlisberger have developed a close relationship since McDonald's arrival via a trade with San Francisco on the eve of the 2017 season. Their lockers are next to each other inside the team's practice facility and they have spent a considerable amount of time together before COVID-19 hit. While it's unclear if McDonald and Roethlisberger sat near each other on the team plane to and from Dallas, Tomlin pointed out the players are required to wear masks at all times while on the flight.

Tomlin acknowledged there is a “lack of clarity” at times, which is why the team is in frequent contact with NFL headquarters in New York. This is the second straight week the Steelers have been involved in a game where a player was given a test, then played only to be informed the pre-game test was positive sometime after the final whistle. Baltimore defensive back Marlon Humphrey received a positive test result just hours after Pittsburgh edged the Ravens.

“I don’t know about developing policy and things of that nature," he said. "I’m just working my tail off here in Pittsburgh to keep this group up and in compliance,” he said.

Backup quarterbacks Mason Rudolph and Josh Dobbs will both get reps during the week with Roethlisberger elsewhere. Tomlin said the team will “play it by ear” when it comes to figuring out who will be the starter if Roethlisberger is unavailable. Tomlin also downplayed any concerns about getting ready for a divisional opponent during a week where face-to-face contact is limited at best.

“We’ve done this with the entire playbook multiple times already in this process,” Tomlin said. “In the offseason, we installed, I think, twice in the spring. We have no reservations about the remote meetings this week. As a matter of fact, from a coaching standpoint, we’re excited about the challenge of keeping the group engaged and utilizing all the tools at our disposal to make sure that we have good and productive meetings in spite of circumstance.”

The team had been COVID-19 free during the first half of the season, but has still been dealing with the virus. The Ravens' game at Tennessee originally scheduled for Oct. 4 was pushed to Oct. 25 because of an outbreak among the Titans. Hours after winning in Baltimore on Nov. 1, Humphrey tested positive, forcing the Steelers to spend last week in the league’s intensive protocol program.

NOTES: DB Mike Hilton (shoulder), FB Derek Watt (hamstring) and DT Tyson Alualu — all of whom sat out against the Cowboys — could return to face Cincinnati. ... Tomlin said Roethlisberger is fine after taking a shot to his left knee in the first half in Dallas. Roethlisberger missed one series but played the entire second half to rally the Steelers from a 10-point deficit.