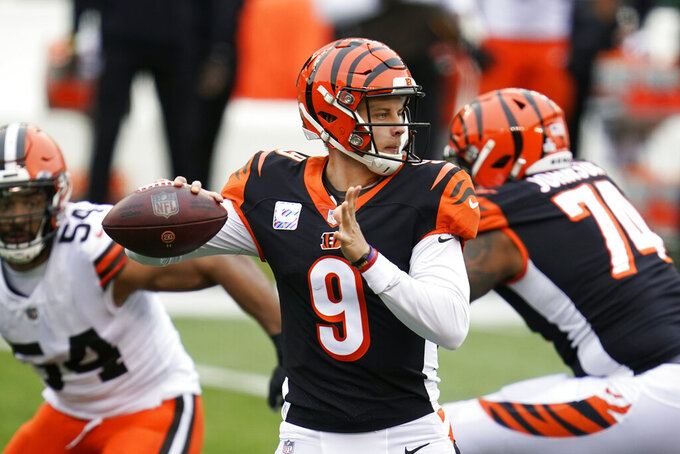 FILE - In this Sunday, Oct. 25, 2020, file photo, Cincinnati Bengals quarterback Joe Burrow (9) throws during the first half of an NFL football game against the Cleveland Browns, in Cincinnati. There’s no shortage of high draft picks making huge impact around the league, especially on offense with the instant success of players like Burrow. (AP Photo/Michael Conroy, File)

If ever there were a year in the NFL when newcomers could be forgiven for a lack of progress, this virus-altered season would be it.

Spring practices vanished, making rookie development across the league more difficult. Plenty of first-year players had growth that was stunted by the lack of in-person learning and exhibition games.

“We had a virtual draft, virtual offseason. Virtual is for the birds,” Las Vegas Raiders coach Jon Gruden said. “I think it doesn’t help get these young guys ready as it did in years past.”

Talent is talent, though. Midway through the 2020 season, numerous newbies are making significant impacts. Pandemic or not, these guys can play — and right away.

“A guy that’s played in every game is pretty well caught up at this point," said Dolphins offensive coordinator Chan Gailey, whose team has won both games since turning the quarterback job over to Tua Tagovailoa after Ryan Fitzpatrick allowed him to ease in.

The level of skill coming from the major college programs, particularly in the passing game, has never been more apparent. With this salary cap system that magnifies the value of rookie-level contracts, the demand for young stars has also never been higher.

Three of the first six picks in the draft were quarterbacks, and Joe Burrow (Cincinnati Bengals), Tagovailoa and Justin Herbert (Los Angeles Chargers) can count as instant successes. Burrow has five games with 300-plus passing yards, one short of Andrew Luck’s record for Indianapolis in 2012.

For Burrow, the first overall selection from national champion LSU, the progress was palpable by the final drive of an otherwise-uninspiring debut in a three-point defeat by the Chargers on Sept. 13.

“That really calmed my nerves and let me know that I could play at this level,” Burrow said.

Herbert will square off against Tagovailoa on Sunday when the Chargers visit the Dolphins, just the seventh NFL game since 1967 pitting two rookie starters at quarterback who were both taken in the top six picks of the draft. Herbert has passed for 2,146 yards for the second-highest total in league history over a player’s first seven games, and the Chargers are second in the NFL in total yards.

“I’ve never really looked at it as me being the rookie, the new guy. I always try to take everything like a veteran takes it,” said Jefferson, who leads all first-year players with 627 receiving yards. “Not trying to have that rookie mindset. Not waiting for somebody to lead me in the right direction.”

Claypool, who has 444 yards and five touchdowns for the NFL's only undefeated team, recently theorized that the absence of a normal preseason might have actually helped more than hurt.

“The urgency increases when you’re getting ready for a regular-season game,” Claypool said. “I knew I had to have the playbook down before the first game, so that forced me to study more.”

Kansas City's Clyde Edwards-Helaire, a college teammate of Burrow and Jefferson, was the only running back taken in the first round. He's on pace for a 1,000-yard season on the ground. Fellow ball carriers D'Andre Swift (Detroit Lions), Jonathan Taylor (Indianapolis Colts) and Antonio Gibson (Washington Football Team) have each been integral parts of their respective offenses, as has the undrafted king of the 2020 class, James Robinson of the Jacksonville Jaguars.

Offensive linemen lately have had a steeper climb to NFL success because of the prevalence of spread schemes in college that keep them in two-point stances, but the Dolphins are starting three rookies up front for the first time in team history. Tristan Wirfs has been a bulwark at tackle for the Tampa Bay Buccaneers, as has Mekhi Becton for the winless New York Jets.

Cornerback is probably the toughest position to master, and the Vikings have felt this pain as much as any team with two rookies — Jeff Gladney and Cameron Dantzler — in the starting lineup. Safeties are better positioned for quicker impacts, and two second-round picks in the NFC South have been instant hits: Antoine Winfield Jr. for the Buccaneers and Jeremy Chinn for the Carolina Panthers.

Washington defensive end Chase Young, the second overall pick, has come as advertised as a pass rusher applying plenty of pressure and drawing frequent double teams. He has 3 1/2 sacks, a decent total but hardly satisfactory for a certain someone expecting him to lead the league.

“My mom, she gave me like a C-plus,” Young said last week. “Take that on the chin and keep moving. Got to respect what she says.”

“I feel like in all phases of my game, I can get better: run, pass, play recognition, hand usage – just everything,” Young said. “I hope people don’t go to sleep this second half."