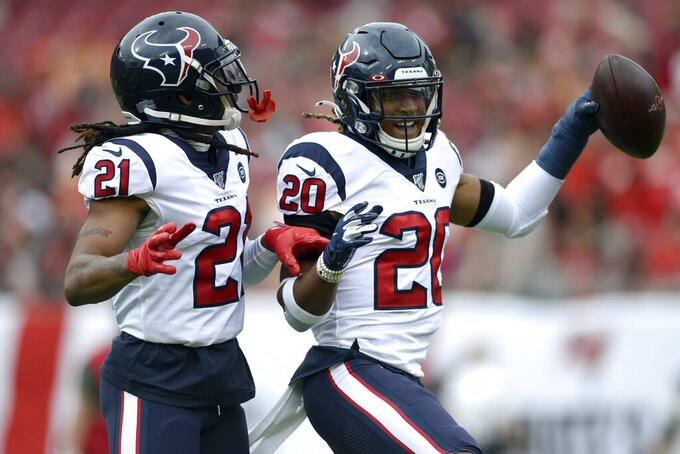 HOUSTON (AP) — The Houston Texans are AFC South champions for the fourth time in five years after beating Tampa Bay this weekend.

But with one game left until the playoffs the Texans know they have plenty of work to do if they hope to make a deep postseason run.

The Texans got the 23-20 victory over the Buccaneers with the help of five turnovers, including an interception on Jameis Winston's first pass that Bradley Roby returned 27 yards for a touchdown.

While the defense had one of its best performances of the season, the offense was largely inconsistent and failed to move the ball effectively for most of the game. Deshaun Watson was 19 of 32 for 184 yards with no touchdowns and an interception. Things weren't any better in the running game where the Texans managed just 68 yards rushing.

Carlos Hyde had a 1-yard run for a touchdown in the second quarter, but the Texans settled for field goals on three other drives despite often playing with a short field because of Tampa Bay's turnovers.

"We have got to be a lot better," coach Bill O'Brien said. "We won, which I think the way that we won was resilient. We played good defense, we played good on special teams. That team had won four or five in a row coming in here (and we) were on the road winning. There are a lot of positives we can take from it, but we also know we have to play a lot better."

Though the Texans have already secured a playoff spot, don't expect O'Brien to rest all his starters on Sunday when they host the Titans.

While the Texans don't have much to play for on Sunday, there's a lot on the line for Tennessee. The Titans would clinch a wild-card spot with a victory on Sunday and could still get in if they lose with help from other teams.

Houston's secondary was the star of Saturday's victory by intercepting Winston four times. The group has gotten a boost from the addition of Roby, a first-round pick 2014, Gareon Conley, a first-round pick in 2017 who was traded from Oakland in October, and Vernon Hargreaves, chosen in the first round in 2016, and added by Houston after his release from Tampa Bay last month.

Watson's interception on Saturday gives him five in the past three games after he threw just two in the previous five games combined. He's completed less than 60 percent of his passes in two of the past three games after completing more than 60 percent in each of the previous 10 games. If the Texans hope to play well this postseason, Watson will need to play more consistently and limit his turnovers.

Safety Justin Reid had an interception, recovered a fumble and had four tackles on Saturday. The second-year player has become one of the leaders of Houston's secondary this season.

"Justin is one of our best players," O'Brien said. "Very smart player and has good ball skills, good tackler."

Receiver Will Fuller continues to have trouble staying on the field because of injuries. Fuller was active against Tampa Bay, but did not have a reception in the first half before injuring his groin and missing the rest of the game. Fuller has missed four games this season because of injuries after missing the last nine games of the 2018 season after sustaining a knee injury which required surgery. O'Brien said that Fuller is day to day for Sunday's game.

O'Brien wouldn't say if he expected star defensive end J.J. Watt to return for the playoffs, but didn't shut the door on that possibility either. Watt played eight games this season before tearing a pectoral muscle on Oct. 27.

"I'm going to pass on that question," O'Brien said when asked about whether Watt will be back this season. "I'm not up here to talk about J.J. We'll get to that when we get to that, whether it's this season or offseason or whatever." ... LB Benardrick McKinney missed Sunday's game with a concussion and O'Brien said he'll be listed as day to day this week.

1 — One more victory will give the Texans 11 wins for the second straight season. If they beat the Titans it will be the first time in franchise history they will have won 11 games in consecutive seasons.

The Texans need to clean up their mistakes on offense and Watson must get back on track for the team to enter the playoffs on a good note. The secondary has done a good job in the past few weeks, but Houston's defensive front needs to get more pressure on quarterbacks after getting just 31 sacks this season, which ranks 25th in the NFL.