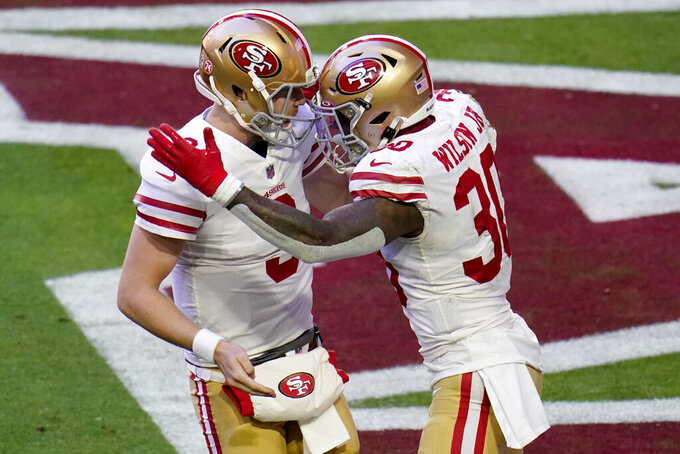 San Francisco 49ers running back Jeff Wilson (30) celebrates his touchdown against the Arizona Cardinals with quarterback C.J. Beathard (3) during the first half of an NFL football game, Saturday, Dec. 26, 2020, in Glendale, Ariz. (AP Photo/Ross D. Franklin)

Then they went out and pushed around the Arizona Cardinals anyway.

For the 49ers, the win was all about pride for a team that went to the Super Bowl last year, but has endured a 2020 that's fallen well short of expectations.

“We’re not proud of our record, we’d like to be better, but that doesn’t tell the story of who we are," Shanahan said.

Because of the loss, the Cardinals (8-7) no longer control their own destiny in the playoff race. If the Chicago Bears win their final two games, they will reach the playoffs because of a tiebreaker over the Cardinals.

It's been a difficult past 12 months for Beathard, whose brother Clayton was fatally stabbed last December outside a bar in Nashville, Tennessee. The quarterback is popular among his teammates because of his upbeat personality despite personal and football setbacks.

“That’s why people don’t mind breaking their neck for him,” Wilson said.

Beathard wasn't amazing on Saturday but avoided big mistakes. He completed 13 of 22 passes for 182 yards, Wilson earned hard yards on the ground and the 49ers came up with two big defensive stops late in the fourth quarter, including Ahkello Witherspoon's interception of Kyler Murray's pass in the end zone.

“I think CJ played awesome,” Shanahan said. “I thought he made some plays in the pass game, made some in the zone read ... Just his leadership out there, the way the guys gravitated to him.”

Arizona scored its first and only touchdown early in the fourth quarter when Kenyan Drake jumped on top of a pile and stretched his arm just far enough for a 1-yard touchdown. Murray couldn’t connect with DeAndre Hopkins on the 2-point conversion and the 49ers still led 14-12.

The Cardinals' next offensive drive stalled at their 35 when they went for it on fourth-and-2. Another Murray-to-Hopkins attempt couldn't connect and the 49ers took over on downs.

A couple of plays later, Juszczyk caught his second touchdown of the day, this one on a 1-yard toss from Beathard with 8:36 left in the fourth.

Following the touchdown, San Francisco's Robbie Gould missed a crucial extra point that kept it a one-possession game at 20-12. He also missed a 37-yard field-goal attempt with 1:05 left. But the 49ers overcame those mistakes and held on for the win.

The Cardinals had a promising opening drive that bogged down in the red zone and ended up settling for a 3-0 lead after a 27-yard field goal by Mike Nugent. It was a common theme for Arizona, which moved the ball at times, but couldn't hit on enough big plays downfield.

“We didn’t execute as well as we probably could have,” Arizona coach Kliff Kingsbury said. “I didn’t call as good of plays as I could’ve. Give them a ton of credit because I thought they were phenomenal with their effort and execution.”

San Francisco took a 7-3 lead late in the first quarter on a 21-yard pass from Beathard to Wilson and the 49ers took a 7-6 advantage into halftime.

Murray completed 31 of 50 passes for 247 yards, no touchdowns and the late interception. Hopkins, the NFL's leading receiver coming into the game, had eight catches for 48 yards.

Cardinals receiver Larry Fitzgerald had six catches for 28 yards on Saturday. The 37-year-old has caught at least 50 passes in 17 straight seasons, which is an NFL record.

This might have been the final home game of Fitzgerald's career. As has been the case the past few years, he says he'll wait until after the season to make any decisions about his future.

Cardinals: LB Haason Reddick (hamstring) left the game in the first quarter, but returned early in the second quarter. He leads the team with 12 1/2 sacks this season. ... RB Chase Edmonds (hip) left the game in the first half and didn't return. ... TE Dan Arnold was evaluated for a concussion. ... Murray was shaken up on the final offensive play of the game and gingerly walked off the field. Trainers were looking at his right leg.

The 49ers play their final “home” game of the year in Arizona against the Seahawks.

The Cardinals travel to face the L.A. Rams in the season finale.