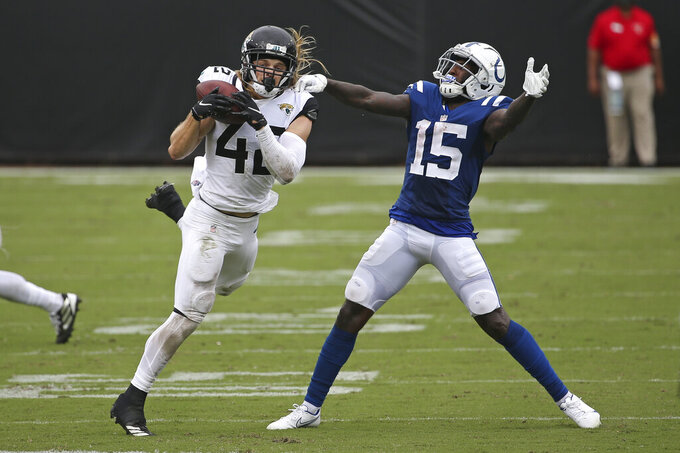 Sure, they've won some season openers only to lose the next week. This franchise hasn't won its first two games since 2008, and that's also the most recent time it won the AFC South. The biggest lesson learned in the Titans' run to the AFC championship game was the importance of starting the postseason at home.

They can take a big, early step toward that goal Sunday against the Jacksonville Jaguars.

“Obviously, the No. 1 goal every single year is to win the division,” Titans safety Kevin Byard said. “So we have to start by beating our division opponent.”

The Titans have won six straight over the Jaguars in Nashville with the past two victories coming in big routs. Tennessee is coming off a 16-14 win in Denver where this franchise hadn't won since 1987, so the Jaguars beating Indianapolis 27-20 got their attention.

“I think the Colts kind of underestimated them, and they win in a dogfight," Byard said of the Jaguars. "So hopefully it won't be a dogfight for us. Hopefully we can get up and score a lot of points. But at the end of the day, it's all about trying to be 1-0 this week.”

The Jaguars also have their eye on staying undefeated, which would be only the eighth such 2-0 start in franchise history and the second time they've done that inside the division.

“I feel like (there’s) always going to be that doubt when people think about us, and that’s just the status quo we have to change around here,” Jaguars defensive end Josh Allen said. “So, yeah, I think it’s a big game for us, it’s a big game because it’s a divisional game. It’s a game we must have.”

Stephen Gostkowski hit the practice field after missing two field goals and an extra point with a third field goal blocked in Denver. The four-time Pro Bowler never missed that much in a single game during 14 years with the Patriots. Special teams coordinator Craig Aukerman said all the issues are fixable.

“When he was missing a couple, he was like, 'Man I've never had this happen,'" Aukerman said. "And it's kind of like, 'Hey we've got to refocus, talk about a few things.'"

Jacksonville started three rookies in Week 1, and each had memorable debuts. The Jaguars hope they can build on those against Tennessee.

Undrafted running back James Robinson ran 16 times for 62 yards and leapt a defender during a 28-yard reception. Cornerback CJ Henderson, the ninth overall pick, broke up four passes including his first interception. He also sealed the victory knocking away a fourth-down pass. Second-rounder Laviska Shenault caught three passes for 37 yards and a score and had two carries out of the wildcat formation.

“So much more, so much more,” Shenault said, predicting more down the road. “I’m not the type of guy to talk. I’m a very humble guy and I’m just ready for the opportunities to come my way.”

Just about every defensive move Jacksonville made in the offseason was designed to better stop the run, specifically Derrick Henry. The Jaguars ranked 28th in the NFL against the run in 2019, and Henry managed 203 yards and three touchdowns on the ground in two games against them.

The Titans aren't about to hold back the NFL's rushing leader in 2019, and coach Mike Vrabel said they don't have a “pitch count” for Henry. The 2019 NFL rushing leader carried 31 times in Tennessee's opening win, just the third time Henry has topped 30 carries in a game in his career.

Linebacker Jadeveon Clowney played 47 snaps in his Titans' debut and had a tackle for loss. Now the Titans might have their other free agent signed to help pressure quarterbacks available for the first time on Sunday.

Linebacker Vic Beasley Jr. didn't pass his physical until Sept. 5 and was inactive against Denver. Beasley practiced fully for the first time Thursday since joining the Titans.