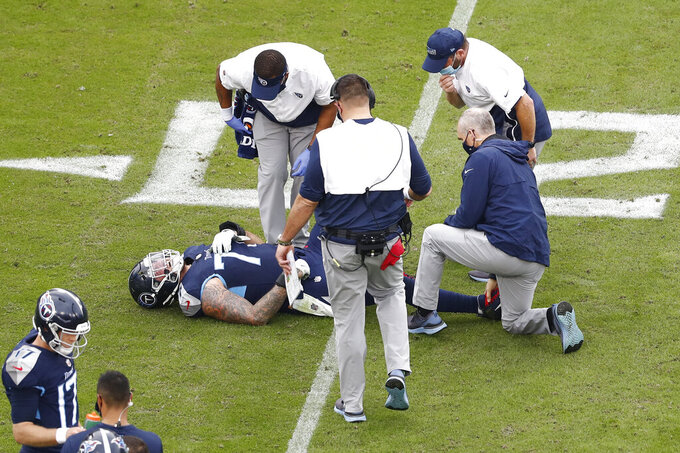 Tennessee Titans offensive tackle Taylor Lewan (77) lies on the ground after being injured in the second half of an NFL football game against the Houston Texans Sunday, Oct. 18, 2020, in Nashville, Tenn. (AP Photo/Wade Payne)

NASHVILLE, Tenn. (AP) — The Tennessee Titans are going to have to finish this season without left tackle Taylor Lewan because of a torn right ACL.

Lewan announced Monday on social media that an MRI confirmed he tore his ACL in the Titans' overtime win over Houston.

“Don’t feel sorry for me, I’m going to handle this rehab like a Pro and come back better than ever,” Lewan wrote on Twitter.

The three-time Pro Bowl tackle was hurt with 6:12 left in the third quarter on an incomplete pass to A.J. Brown. He was able to walk gingerly off the field and then to the locker room by himself. Lewan's replacement, Ty Sambrailo, was beaten by J.J. Watt for a sack two plays later with Ryan Tannehill stripped of the ball.

But the Titans (5-0) pulled out a 42-36 win in overtime to remain one of the NFL's three undefeated teams.

“I can’t wait to watch my guys crush it, I’m going to be the biggest titans fan each and every Sunday,” Lewan said. “We are doing something special here and this small set back doesn’t change a thing!"

The 6-foot-7, 309-pound Lewan was Tennessee's first-round pick out of Michigan in 2014 at No. 11 overall, and he has started 85 of his 90 games played. The Titans started 2-4 a year ago when Lewan was suspended for the first four games.

Titans coach Mike Vrabel said Lewan will go on injured reserve and that he was disappointed for the veteran. Sambrailo is the likeliest to replace Lewan moving forward and noted the veteran settled down after the sack.

“We’ll see what’s best for the team and try to move forward with what the next guy in there, and Ty’s played a bunch in that backup role here in the first five games," Vrabel said.

The Titans drafted offensive tackle Isaiah Wilson out of Georgia at No. 29 overall in April, but the rookie has been on the reserve/COVID-19 list twice and the roster exemption the NFL gave Tennessee for Wilson expired Oct. 14.

Vrabel said he was excited to see where Wilson is at now that they can practice and put a few days together.

“We had gotten cleared and we’d taken him off the reserve list and then we weren’t able to do much,” Vrabel said. "And so he’s in shape. He’s in condition. He’s made a commitment in that regard. And so now we’ll just have to see the next step.”

Cleveland offensive tackle Jack Conklin said he texted Lewan to check on him. Conklin has been through an ACL injury and said Lewan is a resilient guy who will work hard to get back to where he was.

“Obviously, losing your Pro Bowl left tackle is going to be rough," Conklin said of his former team. "They have a good O-line there and I know those guys will step up.”