With trade winds blowing, focus on next year begins for Jets 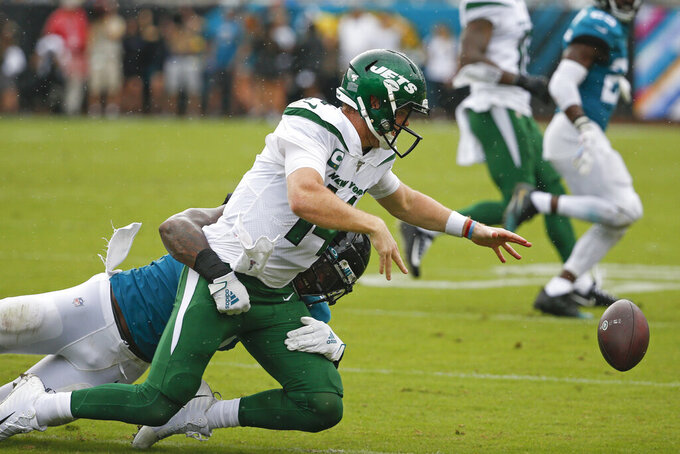 NEW YORK (AP) — The focus for the New York Jets has already turned toward next season.

Sure, there are still nine games remaining. But with a brutal 1-6 start, injuries piling up and the team open to dealing key players, a ninth straight year without a postseason trip already appears highly likely for the frustrated franchise and its fans.

"I just want to win," a somber Jamal Adams said after the Jets' 29-15 loss at Jacksonville on Sunday.

The third-year safety isn't alone, but the victories certainly have been rare lately. Since New York's second straight trip to the AFC championship game to cap the 2010 season, the Jets are 51-84 with just one winning season — 10-6 in 2015. They have had three coaches and four general managers during that span.

And lots and lots of turnover on the roster.

On Monday, the Jets traded defensive lineman Leonard Williams to the Giants for two draft picks, according to a person with direct knowledge of the deal. Williams was once considered a cornerstone of the franchise. Now, he's gone for a third-round pick next year and a fifth-rounder in 2021.

"From the aspect of losing a guy I've been close with on this team ever since I got signed here, it sucks," quarterback Sam Darnold said Monday. "At the same time, it's part of the business and it's not something I can control."

Wide receiver Robby Anderson could be next out the door, as his name has been mentioned frequently in trade rumors. Anderson is currently the Jets' No. 1 receiver, a deep threat who has been building a rapport with Darnold since the quarterback was drafted in the first round last year.

"Robby's obviously a really good asset for us, in terms of being a receiver," Darnold said. "He has had times where he does really well. In terms of the decision of whatever might happen with him, that's just out of my control so I'm not going to sit here and think much about it."

A look at the Jets' recent draft history provides a good clue as to why they haven't been able to build a consistent playoff contender.

New York had 12 picks in the 2014 draft, John Idzik's final class as GM. Only one player remains on the Jets' roster from that group and that's wide receiver Quincy Enunwa, who is out for the season with his second serious neck injury in nearly two years.

With Williams' departure, none of the six players in New York's 2015 draft class — the first under Mike Maccagnan — remain.

That has led to a lack of depth — and, ultimately, victories. And, it's a major reason for the start of another potential rebuild, kicked off by Williams being shipped across town.

Joe Douglas' fingers. The GM's phone is ringing and he's listening to offers. He had the unenviable task of taking over a roster in June — months after free agency and weeks after the draft. Douglas is beginning to collect picks to help build a team for years to come.

What doesn't? When you're 1-6 and just traded one of your big-name players, it's a sure sign that very little is working. The Jets' lack of depth has been critical this season, particularly on the offensive line and at linebacker.

Ryan Griffin. The veteran tight end caught two touchdown passes from Darnold, along with a 2-point conversion pass in his best game with the Jets. Chris Herndon is working his way back from a hamstring injury and should become a primary target for Darnold, but Griffin showed he also could be a factor in the passing game moving forward.

Darnold. After a terrific performance against Dallas in his return from a monthlong bout with mononucleosis, it has been downhill in the two games since. He's 32 of 64 for 304 yards and two touchdowns with seven interceptions in that span. Darnold's footwork and timing also have been off, not a good sign for a player expected to be taking the next step at this point.

Darnold is dealing with a sprained left thumb, and also needed the toenail on his left big toe removed last week. ... LB C.J. Mosley is out another five to six weeks while trying to recover from a groin injury that has sidelined him most of the season. ... C Ryan Kalil has a knee injury that could keep him out for at least this week.

9 — The number of carries Le'Veon Bell got the entire game against the Jaguars. He gained just 23 yards after appearing to be on the verge of breaking out with 70 against the Patriots last Monday night.

The heat's on coach Adam Gase and the Jets already, but if they lose to the lowly Dolphins — Gase's former team — on Sunday in Miami? Well, things could start getting really ugly on sports talk radio and social media.

"We've just got to find a way to execute a whole lot better on Sundays," Gase said.