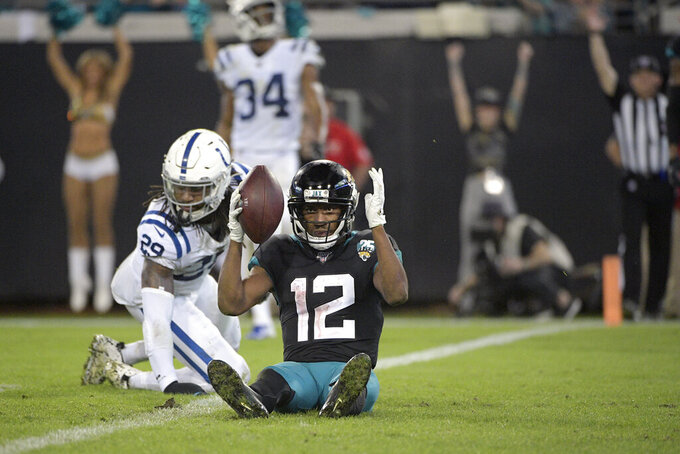 FILE - In this Sunday, Dec. 29, 2019, file photo, Jacksonville Jaguars wide receiver Dede Westbrook (12) celebrates after catching an 18-yard pass in the end zone for a touchdown in front of Indianapolis Colts safety Malik Hooker (29) during the second half of an NFL football game in Jacksonville, Fla. The Minnesota Vikings have signed former Jacksonville wide receiver Westbrook. He brings some needed depth at the position and another option for a punt returner. (AP Photo/Phelan M. Ebenhack, File)

MINNEAPOLIS (AP) — The Minnesota Vikings signed former Jacksonville wide receiver Dede Westbrook on Sunday, adding some needed depth at the position and another option for a punt returner.

Westbrook's agency announced the news on Twitter. The product of Oklahoma, who was a fourth-round draft pick by the Jaguars in 2017, caught only one pass and played in just two games last year. He was a healthy scratch for the first time in his career, before a knee injury knocked him out of action for the second half of the schedule.

The Vikings are set with Justin Jefferson and Adam Thielen at the top two spots, but there's plenty of room behind them for another wide receiver to emerge as a solid No. 3 option. Westbrook's best season was in 2018, with 66 catches for 717 yards and five touchdowns. He matched that reception total in 2019, with 660 yards and three scores.

Westbrook also has a career punt return average of 9.8 yards. He had a 74-yard return for a touchdown in 2018. The Vikings had a total of only 69 punt return yards last year, on 16 attempts.