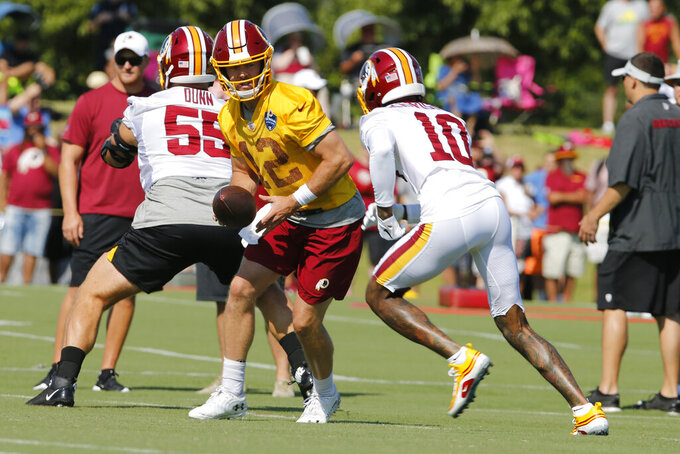 "That's the rumor going around between me and the guy next to me in the locker room: 'Trent will be here tomorrow, right?'" Bergstrom said.

Williams didn't report to training camp because of a contract dispute, and the standout left tackle's uncertain status is the biggest question of many facing the Washington Redskins over the next several weeks. This camp will be defined by his absence and the three-way quarterback competition among first-round pick Dwayne Haskins, trade acquisition Case Keenum and longtime backup Colt McCoy.

Coach Jay Gruden said Thursday he had no update on Williams. Team President Bruce Allen earlier this month said Williams "should be" at camp and expressed no concern over the situation.

"It's weird not to have him here," linebacker Ryan Kerrigan said after the first practice of camp. "Obviously I hope everything works out and that he's back here because he's not only an elite offensive tackle, he is the best offensive tackle in the game. ... We need him on this team, and I hope he's back here sooner than later."

Williams, 31, is arguably Washington's most important player. He has started 119 games over his nine-year NFL career, and the offensive line the past two seasons has struggled to compensate without him.

Not having big No. 71 on the field at camp is a gaping hole that's almost impossible to ignore.

That job for now belongs to Ereck Flowers, a 2015 top-10 pick who didn't live up to expectations with the New York Giants and was signed to compete for the starting left guard job.

"We brought Ereck Flowers in here to be an offensive lineman," Gruden said. "The initial idea was to play him at guard but also understanding that he has the ability to play at both right and left tackle. ... If need be, we can put him back outside at tackle no problem."

Starting center Chase Roullier also missed practice Thursday with injury, continuing an unsettling trend. Blocking for whoever wins the QB competition is a key after offensive line injuries contributed to derailing the 2017 and 2018 seasons.

That looks like a wide-open race. Keenum, acquired in a trade with Denver, got the initial snaps with the first-team offense, though all three impressed in team drills.

"Today was a hell of a day for all of them," wide receiver Paul Richardson said. "I caught passes from all of them. I warmed up with all of them. I think it's going to be a healthy competition. I'm anxious to see how those guys work with each other and push each other."

Where Keenum figures to be the slight favorite to earn Washington's Week 1 starting job, Jon Bostic has that distinction at middle linebacker after the surprising release of Mason Foster on the eve of camp. Bostic went from under-the-radar signing to calling the defensive plays on Day 1 in the past couple of months, but doesn't want the focus put on him with Foster gone.

The cohesion of that defense is another major question facing the Redskins after the unit plunged from first to 16th in the league last season. Changes were made to the coaching staff in light of the drop in production, and talent was added in the form of safety Landon Collins and rookie edge rusher Montez Sweat, so defensive coordinator Greg Manusky is now under the microscope.

"I think the big thing is as a teacher and as a coordinator is to make sure everyone's on the same page," Gruden said. "It's all about communication on defense. I think we have enough firepower talent-wise to hold our own."