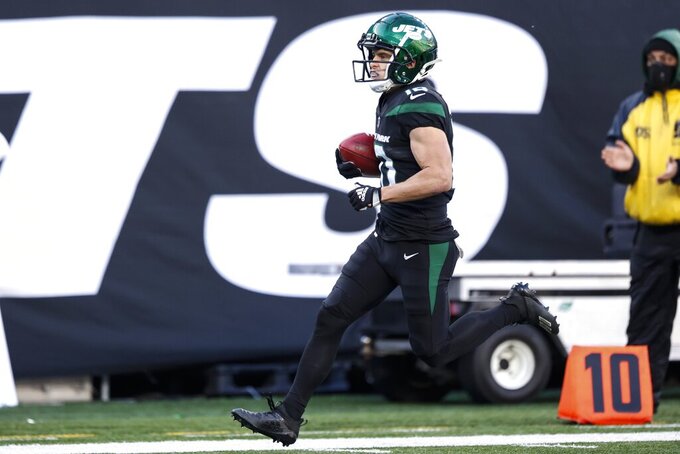 New York Jets' Braxton Berrios (10) runs back a kickoff for a touchdown during the first half of an NFL football game against the Jacksonville Jaguars Sunday, Dec. 26, 2021, in East Rutherford, N.J. (AP Photo/John Munson)

Then he watched New York's defense use a goal-line stand at the end of the game to hold on and beat the Jacksonville Jaguars 26-21 on Sunday.

“That's what makes football so fun right there, guys grinding it out,” Wilson said. “The D did a good job right there.”

It was the fourth matchup of rookie quarterbacks taken with the first two picks in the draft — and the No. 2 selection came out on top.

A 26-yard run by the No. 1 pick got the ball to the 5, and he followed with a 4-yard pass to Marvin Jones. Lawrence spiked the ball and it became fourth-and-the-game.

But Lawrence's pass to Jones fell incomplete — and the Jaguars were called for an illegal shift that the Jets declined.

The Jets had 20 players on the COVID-19 list and played without coach Robert Saleh because he didn't clear protocols after testing positive earlier in the week.

“It was just the culmination of the week, everybody being professional, everybody going about their job with all the adversity,” said acting head coach Ron Middleton, normally the Jets' tight ends coach who was given a game ball by his team after the victory.

“It was an awesome win.”

Wilson set a Jets record for a quarterback with 91 yards rushing, highlighted by a 52-yard score — the longest run by a QB in franchise history. It's also the third-longest TD run by a rookie quarterback in NFL history.

“It was the longest touchdown run probably in my whole life, too,” Wilson said.

He was also 14 of 22 for 102 yards passing, including a TD throw to backup offensive lineman Conor McDermott.

“That was probably the highlight of my entire life so far, that touchdown pass,” a smiling Wilson said.

Braxton Berrios returned a kickoff 102 yards for a touchdown, and Michael Carter ran for 118 yards on 16 carries for New York.

The silver lining for the Jaguars in defeat: They created some space between themselves and the Jets for next year's No. 1 draft pick.

“Even though we lost, I definitely feel the momentum is going in the right direction,” Jacksonville cornerback Shaquill Griffin said.

Lawrence, the top selection in April, was 26 of 39 for 280 yards for the Jaguars, who lost top running back James Robinson to a torn Achilles tendon early in the game.

“What was different about this one was ... so close,” Lawrence said. “We’re 2 yards away. Obviously, we didn’t execute cleanly there at the end.”

With the Jets leading 16-15 in the fourth quarter, Wilson marched New York downfield with a run-heavy drive to get to the 1 after a 2-yard catch by Carter.

On fourth down, New York went — and Wilson found McDermott, a tackle eligible, for a touchdown to put the Jets up 23-15 with 9:16 left. McDermott reached up and leaped — looking very much like a tight end, which he played in high school — to come down with the ball.

Dare Ogunbowale, in for the injured Robinson, answered with a 1-yard touchdown run with 5:25 remaining. But Lawrence's throw on a 2-point try fell incomplete.

After Matthew Wright's 21-yard field goal put Jacksonville up 3-0, Wilson put the Jets ahead with his record-setting run late in the first quarter. He rolled to his right to escape a sack, zipped down the right sideline, stayed inbounds doing a tightrope walk near the Jaguars 25 before diving into the end zone.

Pineiro, in his third game with the Jets after two other kickers struggled, had his extra-point try blocked by Adam Gotsis.

Lawrence marched the Jaguars right back downfield, finding Laquon Treadwell for 20 yards on fourth-and-1. Four plays later, Lawrence ran a keeper from the 3, but had the ball knocked out of his hands by Jason Pinnock. Offensive lineman Will Richardson recovered in the end zone, putting Jacksonville back ahead.

According to Elias Sports Bureau records dating to 1950, it was the first time multiple offensive linemen scored TDs in the same game.

The Jaguars went for 2 after a penalty by the Jets on the extra point, but Ogubowale's run was stopped, making it 9-6.

Berrios fielded the ensuing kickoff in the end zone and ran it all the way back for a 13-9 lead. It was New York's first kickoff return for a touchdown since Andre Roberts against Green Bay in 2018.

Jaguars: Other than Robinson, LB Dakota Allen left with a shoulder injury in the second quarter. ... DE/OLB K’Lavon Chaisson injured an ankle in the fourth quarter.

Jaguars: at New England, where they are 0-8, next Sunday.