Bell gets win vs. former team as Jets top Steelers 16-10 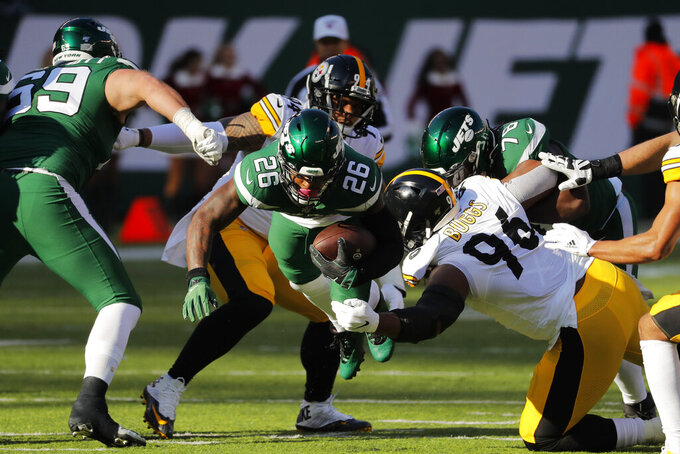 The New York Jets running back surely was trolling his old team, right? The gold and black of the Pittsburgh Steelers?

“I wasn't doing it to be petty or nothing," a smiling Bell said. “I thought it would draw a little attention. That's all I did. That's all it was, though."

Then he went onto the field and helped his new team beat his former teammates 16-10 on Sunday, damaging the Steelers' playoff hopes in a big way in the process.

“The win felt great," Bell said. “Every win feels great, but this one had a little extra topping on it."

Bell ran for 72 yards on 25 carries and had four receptions for 21 yards in the victory. He also had one of the key plays late, running for 7 yards on third-and-5 and helping the Jets eventually move into field-goal range — with Sam Ficken booting a 42-yarder to make it 16-10.

“He did a really good job this week of kind of staying level," coach Adam Gase said. “I kept talking to him and asking him how he was and he was great all week long — just focused on what he had to do."

Bell spent his first six NFL seasons with the Steelers, establishing himself as arguably the league's most versatile running back. But a contract dispute created a rift in the relationship that couldn't be salvaged.

The Steelers placed the franchise tag on Bell in 2017, and did so again last season — but he refused to sign it a year ago and sat out the entire campaign. He became a free agent and ended up signing a four-year, $52.5 million deal with the Jets.

So, it's safe to say Bell had been looking forward to this game since NFL released the league schedule in the spring.

“Going against my old teammates, guys who could never really hit me in practice, we had an opportunity to really go at it today," Bell said. “It was fun, you know? I respect all those guys over there."

Bell even spent a few moments chatting with Steelers coach Mike Tomlin, the first time the two have spoken since the running back left Pittsburgh.

“I saw him before and after the game," Bell said. “He showed respect, showed love. It was good seeing him, too. I understand how everything went on and things like that. It obviously wasn't his fault, but he respects me and I respect him."

It hasn't been quite the comeback season most expected of Bell, whose statistics aren't overly impressive. He has run for 748 yards and three touchdowns, and his 3.3 average per carry ranks as the worst of his career.

A few factors have contributed to those subpar numbers, including the fact the offensive line struggled with consistency and communication in front of him for much of the first half of the season. The overall offense was up and down, too. But Bell has often said this season that he has been doing a lot of the little things — blocking, for instance — that don't necessarily show up on the stats sheet.

He has also said he didn't think he was being given a full opportunity to really showcase his abilities. Bell had no qualms with how Gase used him Sunday.

“I loved it," Bell said with a big grin. “It felt good. I'm sore, and there's no better feeling. Coach Gase, he told me before the game, ‘I got you today. I'm making sure you're getting the ball today.'"

Bell and the Jets were able to play spoiler for a day after an injury-plagued season for the team. New York has now won five of its last seven, and the way the team is closing the season has Bell optimistic about next year.

“Like I said weeks ago, we get a new program, new guys in, new faces and new coaches and injuries and all that," he said. “When all that happens, it's going to take time to get the ship sailing in the right direction.

“Now, we're starting to see the ship turn a little bit. That's all I've been preaching."