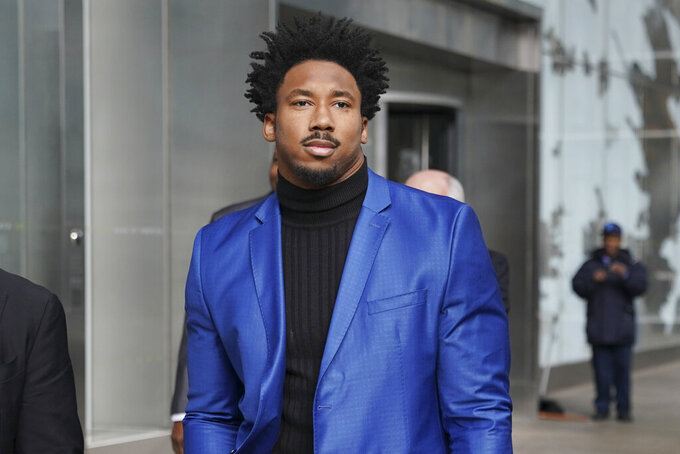 FILE - In this Nov. 20, 2019 file photo Myles Garrett leaves an office building in New York. The Cleveland Browns will exercise the fifth-year contract options on star defensive end Myles Garrett and tight end David Njoku, a person familiar with the decisions told the Associated Press on Monday, April 27, 2020. The decision on Garett was no surprise and will be official later in the day, said the person who spoke on condition of anonymity because the team has not publicly revealed its plans. (AP Photo/Seth Wenig, file)

CLEVELAND (AP) — The Browns didn't have a major decision to make on Myles Garrett's near future. Now they can begin working on keeping the star defensive end much longer.

Cleveland exercised the fifth-year contract options Monday on Garrett and tight end David Njoku, whose time with the Browns appeared uncertain after some offseason business by the team.

The decision on Garrett was not a surprise as the No. 1 overall pick in the 2017 draft has developed into the one of the NFL's premier pass rushers.

The former Texas A&M standout had seven sacks as a rookie, 13 1/2 in 2018 and was on his way to another big season in 2019 before he was indefinitely suspended for striking Pittsburgh Steelers quarterback Mason Rudolph in the head with a swung helmet in a Nov. 14 game.

Now that the Browns have him locked up through 2021 — Garrett will make a base salary of $4.6 million in 2020 and $15.1 million in the fifth year of his deal in 2021 — the team will likely try to sign him to a long-term extension. Garrett and running back Nick Chubb are considered franchise cornerstones.

While Garrett's option was a no-brainer, Njoku's days in Cleveland didn't appear guaranteed.

A first-round pick in 2017, he missed 10 games last season after breaking his wrist in Week 2 and there seemed to be doubt whether he fit into new coach Kevin Stefanski's plans when the Browns signed free agent Austin Hooper and then drafted Harrison Bryant, the John Mackey Award winner, on Saturday.

But Stefanski and Browns general manager Andrew Berry both said they feel Njoku can still be productive.

“We still have a ton of belief in David and he is very talented,” Berry said following the draft. ”Obviously, he was not on the field much last year but he is a guy with outstanding physical tools, he has proven NFL production and we still think the future is very bright with him here.”