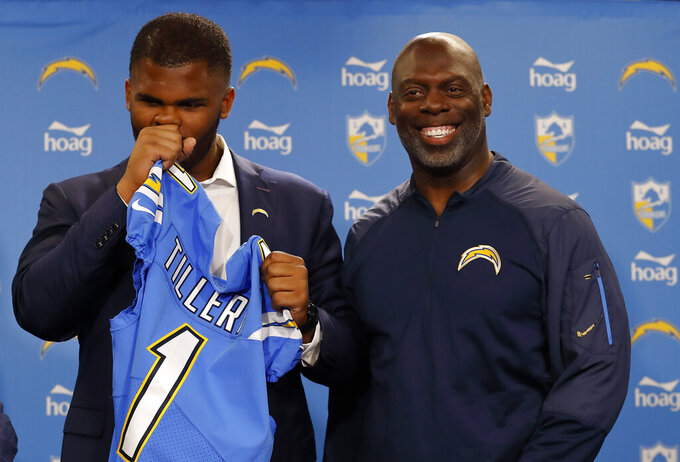 COSTA MESA, Calif. (AP) — Los Angeles Chargers general manager Tom Telesco knew that he needed to add depth at defensive tackle and linebacker during the NFL draft. The Chargers accomplished that as four of their seven selections addressed those two areas.

Defensive tackles bookended the Chargers selections. They took Notre Dame's Jerry Tillery in the first round and wrapped up the draft with Cincinnati's Cortez Broughton in the seventh.

Los Angeles addressed linebacker on Saturday with Notre Dame's Drue Tranquill in the fourth round and Houston's Emeke Egbule in the sixth.

"I think I probably say it every year it doesn't work out 100 percent the way you want, but it was darn good. It was really good," Telesco said. "We had players in the right positions to get them. As far as where we are right now, I'm very pleased."

Telesco, though, added a bit of candor when he said that what looks good right now doesn't always hold up once training camp starts.

Tillery and second-round pick Nasir Adderley — a safety from Delaware — have the best chances of making immediate contributions when the season opens on Sept. 6 against Indianapolis. Tillery joins a defensive line group that has seen three tackles with starting experience depart during the offseason.

What Tillery does add is a tackle with pass-rushing ability that is able to collapse the pocket, which could give defensive ends Joey Bosa and Melvin Ingram even more sack opportunities. Tillery had eight sacks for the Fighting Irish last season and more than one-third of his tackles were for loss.

Adderley will be part of a free safety competition that is wide open after Jahleel Addae was released before the start of free agency. Adderley had 11 interceptions during his college career and possesses good closing speed as well as strong ball instincts.

"I thought the draft board did match well with our needs, but we certainly didn't chase anything," coach Anthony Lynn said.

The Chargers drafted only two players on offense — Sioux Falls tackle Trey Pipkins in the third round and North Dakota State quarterback Easton Stick in the fifth.

Pipkins is a natural left tackle, but with Russell Okung entrenched there as the starter he could be the swing tackle at both spots this season. Pipkins is only the second player drafted from Division II Sioux Falls.

Los Angeles did not draft a running back or wide receiver due to a combination of factors.

"We like our guys and the board is the board," Telesco said. "There wasn't a player there that we felt was better than what we had."

Stick is the first quarterback to be drafted by the Chargers since 2013 when they took Brad Sorenson in the seventh round.

Stick — who comes from the same college that produced Carson Wentz — is the winningest quarterback in FCS history (49-3) while leading the Bison to three national championships. He finished his career with 8,693 passing yards and 88 touchdowns. He also rushed for 2,523 yards and 41 TDs.

With Stick's versatility as a running quarterback, there are some who wonder if the Chargers could use him like the New Orleans Saints utilize Taysom Hill.

Lynn tried to dispel those comparisons.

"He's going to play quarterback for us. We have running backs," Lynn said. "We don't a need a quarterback that can run all over the place, but he can certainly create when he has to."

The Chargers finished last season ranked ninth in the NFL in total defense, but it was a unit that was thin at defensive tackle and linebacker, which they were able to rectify in the draft.

With the exception of Tillery and Adderley, most of the class was selected to provide depth for a team that tied for the best regular-season record in the AFC last season at 12-4. Telesco and his staff have had success finding starters with late-round picks. Six of the starters on last year's team were selected in the third round or later.

Telesco could look to add another free safety for depth or camp competition as well as fortify depth on the offensive line and possibly bringing in a wide receiver to compete for a roster spot.

The bigger priorities will be trying to re-sign quarterback Philip Rivers and running back Melvin Gordon to extensions.