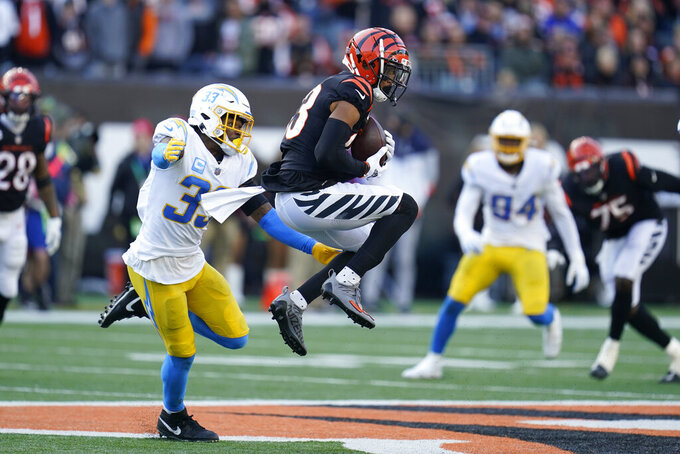 COSTA MESA, Calif. (AP) — Los Angeles Chargers safety Derwin James is questionable for Sunday's game against the New York Giants after being placed on the injury list Saturday due to a hamstring issue.

James leads NFL defensive backs with 100 tackles and is tied for 12th overall after missing last season due to a knee injury. He also has two interceptions, two sacks and three forced fumbles.

James' addition to the injury report was part of a flurry of moves the team made on Saturday. Wide receiver Mike Williams and cornerback Chris Harris Jr. were activated off the reserve/COVID-19 list after being quarantined for five days and testing negative. Both were deemed close contacts after wide receiver Keenan Allen tested positive on Monday and will miss Sunday's game.

The Chargers have also activated defensive back Ben DeLuca, outside linebacker Emeke Egbule and wide receiver Jason Moore to the gameday roster. Outside linebacker Kyler Fackrell has been placed on injured reserve after he underwent a procedure on his knee earlier in the week.