Chiefs in tough spot amid COVID-19 positives on other teams 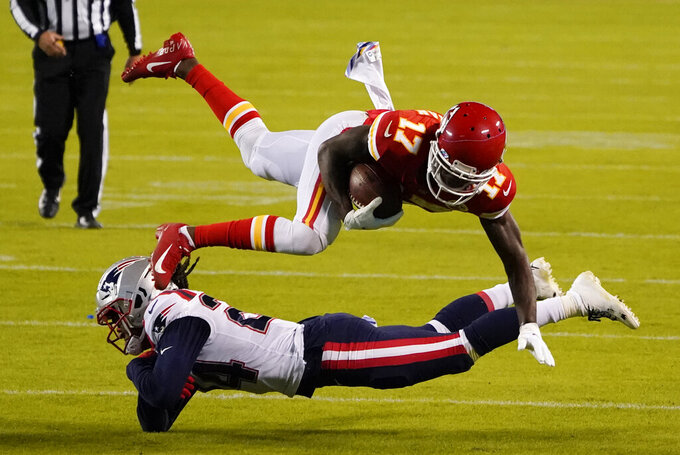 KANSAS CITY, Mo. (AP) — Chiefs quarterback Patrick Mahomes has taken every precaution he can imagine to prevent contracting COVID-19, putting limits on who visits his home and even sleeping in a separate bedroom from his pregnant fiancée.

Now, an admitted “mental lapse" by the Super Bowl MVP has his team on edge.

Mahomes had just taken a knee to run out the clock on the Chiefs' 26-10 victory over the Patriots on Monday night in a game that was delayed 24 hours by positive tests on each team.

Amid an innocent scene of sportsmanship, NFL Defensive Player of the Year Stephon Gilmore approached Mahomes to give him a high-five and share a few words.

On Wednesday, the New England defensive back reportedly tested positive for COVID-19.

“If you thought you were going through the entire season and nobody was testing positive, you had some false hope,” Mahomes said later Wednesday. “Obviously with Brittany being pregnant, I do what I can to socially distance, wearing my mask and staying safe. To be available for the team but also to keep my family safe.”

Indeed, the Chiefs (4-0) are in a precarious state of midweek uncertainty.

Along with their own positive test, which has forced Jordan Ta'amu to attend team meetings remotely, the Chiefs are faced with the prospect that Gilmore may have spread COVID-19 to Mahomes and others. Gilmore played every defensive snap in the game, he twice tackled wide receiver Mecole Hardman and he was at the bottom of a scrum as he recovered a fumble.

Then there was that face-to-face chit-chat with Mahomes as the final seconds ticked off the clock.

“I think you just have to trust in the process and the protocols that are set in place,” Mahomes said. “Obviously knowing that I went to him after the game and gave him a high-five, like I have all my career and not thinking about it — it was a mental lapse, just sportsmanship. But I think the protocols are good.”

That's not the end of the uncertainty, though. The Chiefs also are preparing to face Las Vegas on Sunday, and the Raiders were forced to put defensive tackle Maurice Hurst on the COVID-19 list — reserved for players who test positive or are in close contact to somebody who has tested positive — earlier this week.

The NFL and its players' association already have been in contact with the Chiefs, and daily testing continues for players, coaches and staff members. But coach Andy Reid said there has been no additional contact tracing from the Patriots game, even though players wear devices that could tell whether Gilmore was within 6 feet of any players.

“Listen, we take it day by day and try to do the best we possibly can at keeping ourselves as clean as we can,” Reid said, “and at the same time learning every single day. We're all wearing masks — we've been doing that — or shields, whatever. We are trying to keep our noses and mouths covered the best we possibly can. But listen, just like you guys, every day is a new experience you have to work through and that's what we're doing.”

Reid said he's not prepared to isolate Mahomes or any individual player, but he did admit that “we have some guys doing virtual (meetings).” He also acknowledged the team is using every space possible within its practice facility, including the cafeteria and practice fields, so that they can socially distance in positional and full-squad meetings.

“After our meetings,” Reid said, “it looks like an Indy 500 pit crew coming through there changing tires, cleaning up the tables and making sure everything is disinfected and cleaned up.”

While the Chiefs have yet to have any additional positive tests since their game Monday night, they know that could change at any moment. And as they continue to prepare for Sunday, they are preparing for as many contingencies as possible.

“You know, it's definitely crazy right now,” Chiefs wide receiver Tyreek Hill said. “My job is to just come in and control the things I can control. That's my safety and that's my teammates' safety. That's my coaches' safety and my kids' safety. I'm going to continue to do everything I can, whether that's wearing masks in meetings, even practicing throughout the week. I'm going to continue doing the things the NFL and the Chiefs have told us to do.”

NOTES: DT Chris Jones returned to practice Wednesday after missing the Patriots game with a groin injury. DE Mike Danna remained out with a hamstring injury. ... CB Bashaud Breeland practiced for the first time since finishing a four-game suspension for violating the NFL's substance-abuse policy. His return comes with L'Jarius Sneed recovering from a broken collarbone that the rookie cornerback sustained two weeks ago in Baltimore.