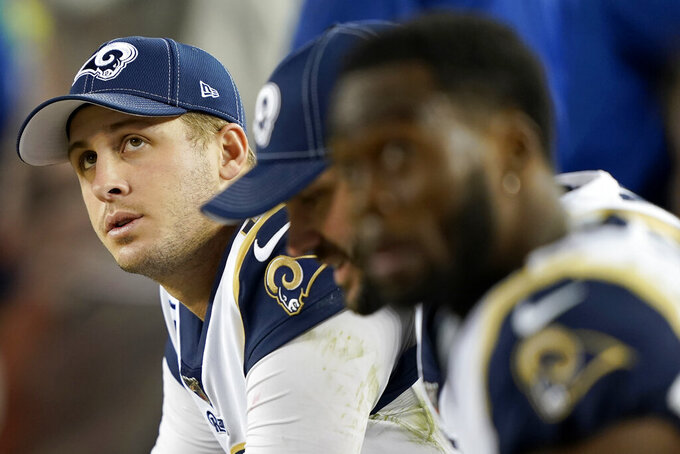 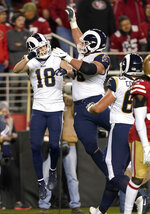 SANTA CLARA, Calif. (AP) — The Los Angeles Rams had a chance to put aside their Super Bowl hangover, needing one critical stop to remain in playoff contention.

Instead, this up-and-down season got yet another disappointment.

Los Angeles' defense allowed quarterback Jimmy Garoppolo to convert twice on third-and-16 to set up Robbie Gould's game-winning field goal, and the Rams were eliminated from playoff contention with a 34-31 loss Saturday night to the San Francisco 49ers.

Despite all that, they got back into postseason contention with wins over Arizona and Seattle to start December. Their playoff hopes took a hit with a 44-21 loss at Dallas last week and were ended against the 49ers.

Los Angeles needed victories in the final two games, as well as two losses by Minnesota. Instead, they are the fifth team in the past 10 years to miss the playoffs entirely the year after making the Super Bowl.

"It's extremely disappointing," quarterback Jared Goff said. “You never envision something like this when you start the year. It's not even close to the standard we want to hold. It's sickening.”

Goff had a game like his season, a few bright spots with too many negatives. He staked Los Angeles to a 21-10 lead in the second quarter with a 10-yard TD pass to Brandin Cooks and two more drives that ended in TD runs for Gurley.

But he also threw an interception late in the half that Fred Warner returned 46 yards for a score that gave the Niners a 24-21 lead.

Goff threw a go-ahead TD pass to Cooper Kupp in the third quarter and led a tying field goal drive in the fourth quarter. But he also took a key intentional grounding penalty that led to a missed field goal after Los Angeles started its first drive of the second half at the San Francisco 25 following an interception.

Goff said this year's problems had little to do with last season's finish with a disappointing Super Bowl loss to New England.

"I think we were in plenty of games and had plenty of chances to win games," Goff said. "The ball goes here or there a couple of times and we're having a completely different conversation right now. The ball didn't go our way this year, and we didn't execute to our ability. It has absolutely nothing to do with what happened last year."

The closing minutes of this game will likely haunt the Rams for some time. They allowed Garoppolo to find Kendrick Bourne on an 18-yard pass over the middle to convert the first third-and-16.

Coach Sean McVay then took a timeout after a second-down sack put San Francisco in third-and-16 once again with 58 seconds left.

A blown coverage led to a 46-yard pass to Emmanuel Sanders, and all that was left was for the Niners to run down the clock and make the kick to knock Los Angeles out.

"Bottom line is you had two third down and I want to say 16s where we had a chance to get those guys off the grass, the way that we had played the whole night," McVay said. "I think those two plays are not indicative of the effort that our defense gave and it's unfortunate that they ended that way, because they had put together a really good performance against a tough offense, but those two plays hurt us and we've got to be better there."