Edelman says return to Gillette Stadium will 'hit my soul' 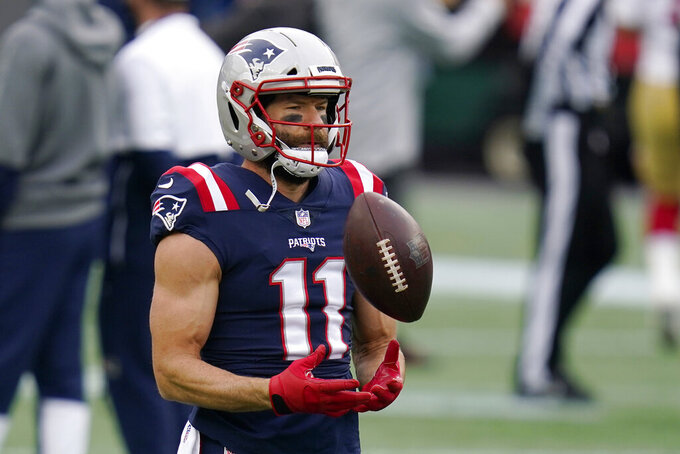 FILE - In this Oct. 26, 2020, file photo, New England Patriots quarterback wide receiver warms up before an NFL football game against the San Francisco 49ers in Foxborough, Mass. Edelman will soon be back on the field where his NFL career began and ultimately ended. The Patriots are set honor Edelman during halftime of their game against the New Orleans Saints after the former receiver announced his retirement in April following 11 NFL seasons — all in New England. (AP Photo/Charles Krupa, File)

FOXBOROUGH, Mass. (AP) — Julian Edelman will soon return to the field where his NFL career began and ultimately ended.

He said Thursday he hopes his return will be as much as a salute to the franchise that took a chance on an underdog and helped him grow into one of the most clutch postseason performers in the team’s history.

The Patriots are set to honor Edelman during halftime of Sunday’s game against the Saints after the receiver announced his retirement in April following 11 NFL seasons — all in New England.

He expects the day to be emotional for him.

“It’s definitely gonna hit my soul,” Edelman said. “It will be the first time I see the guys that I did played with. ... Coaches and guys behind the scenes. I haven’t seen anyone. It’s gonna be interesting. I don’t really know what to expect. I’m an emotional guy. We’ll see if I can hold it up.”

Edelman decided to call it a career because of a knee injury that cut his 2020 season short after just six games. He also missed the entire 2017 season after tearing a ligament in his right knee.

He reiterated it was his health, and not a lack of desire to keep playing, that led him into his post-retirement career as co-host on Showtime’s “Inside The NFL.”

“It was my body, honestly,” Edelman said. “My knee wasn’t feeling great. And when it becomes a grind to get through practice ... for the output that I was getting, I wasn’t satisfied with that. That wasn’t gonna be enough for me. You look at a guy that you’ve been. I have too much respect for the game. I don’t want to look like an old guy out there, which I felt that was starting to happen.”

It became clear that pushing forward could adversely affect his long-term quality of life — something he was unwilling to chance.

“That’s what this game is about. Father Time is undefeated, and it gets guys differently and it started to get me,” he said. “It was a hell of a ride, though.”

Edelman’s return to Gillette Stadium will be exactly one week before his longtime teammate and friend Tom Brady faces the Patriots for the first time as a member of the Tampa Bay Buccaneers when the teams meet on Oct. 3.

Edelman acknowledged it would be strange to see Brady donning a jersey other than the one he wore when the pair won three Super Bowls together.

“It’s definitely going to be weird. It’s like going to a family barbecue ... and you’re like the kid who has divorced parents and your mom and dad are there and you don’t know how to react. Are they gonna fight, are they not gonna fight? So it’s gonna be interesting,” Edelman said. “But I’m excited. Who’s not excited for it? It’s gonna be an exciting game.”

Edelman will be most remembered for what he did during the postseason, amassing 118 catches for 1,422 yards and seven touchdowns. All from a guy who was selected in the seventh round of the 2009 draft.

It reached a pinnacle in Super Bowl 53 when he hauled in 10 receptions for 141 yards in helping lift the Patriots to a 13-3 victory over the Los Angeles Rams.

He also had a memorable, juggling catch in the 2017 Super Bowl win over Atlanta that helped cap a 91-yard Patriots drive that tied the game near the end of regulation on the way to a 34-28 comeback victory in overtime.

But Edelman said that the favorite play of his career probably came in their Super Bowl win over Seattle.

“The third-and-14 (in the) Super Bowl, where Kam Chancellor took my head off in the middle of the field and I tried to get up and run,” he recalled. “I remember as a kid my brother talking about ‘Oh, this guy can make the catch and take the hit. Tough football player.’ That was kind of something I took to heart, being the guy that could take that hit.

“That was a play that was kind of like a little microcosm of my career that I tried to uphold.”

Asked if he planned to reprise the 100-yard run down the sideline and emphatic “Let’s go!” salute to fans that became his trademark when taking the field prior to games, Edelman didn’t rule it out.

“We’ll see if the knee allows me,” he said. “I always have a few tricks up my sleeve.”