Jets' motivated Bell out to prove he's now better than ever 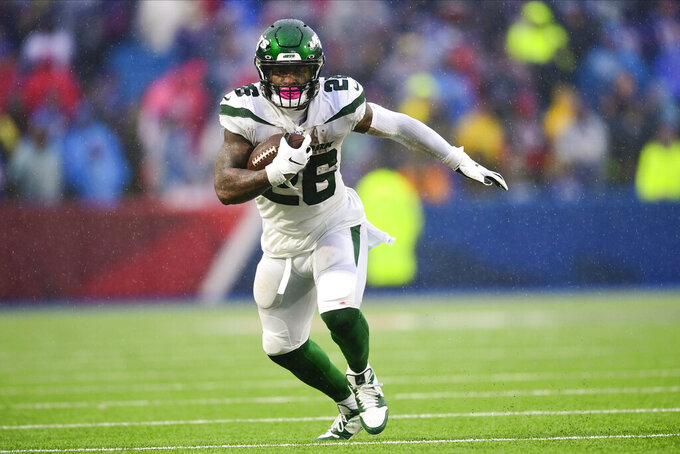 FILE - In this Sunday, Dec. 29, 2019, file photo, New York Jets running back Le'Veon Bell (26) runs against the Buffalo Bills during an NFL football game in Orchard Park, N.Y. Bell has his sights set on a big-time bounce back. The New York Jets star running back put up pedestrian numbers last season after sitting out a year in a contract dispute with the Pittsburgh Steelers. Bell say he's now in the best shape of his career and can't wait to show it on the field. (AP Photo/David Dermer, File)

NEW YORK (AP) — Le'Veon Bell refuses to make excuses or blame anyone else.

The New York Jets star running back acknowledges he wasn't nearly as good as he expected he'd be in his first season with his new team. And, he points solely at himself for that.

Not the playcalling of coach Adam Gase. Not the season-long struggles of the offensive line. Nobody but himself.

So, the 28-year-old Bell dedicated his offseason to being better this year. Much better. And, he arrived for training camp looking leaner and carrying a heavy chip on his shoulder.

It's a bold statement for a player who has already accomplished so much. Bell was widely regarded the best all-around running back in the league just three years ago, a dual threat out of the backfield who could single-handedly flip a game — on the ground, in the passing game or both.

But, things change quickly in the NFL. And after sitting out the 2018 season in a contract stalemate with the Pittsburgh Steelers, he signed with the Jets in March 2019 and then put up pedestrian numbers.

“I feel like I left some yards out there,” Bell acknowledged.

His 789 yards rushing were the second-fewest of his career, and his 3.2 yards per carry were his personal worst. Bell had 66 catches, but still only showed flashes of his previous brilliance. Even worse were the whispers that maybe he lost a step.

“I look back on it, it’s like, dang, I wasn’t even close to where I wanted to be,” he said. “If I wanted to take that next step and be a great player, I didn’t work nearly hard enough."

A year ago, Bell felt fine, he thought. He figured his conditioning was OK, despite the year layoff.

“I think I kind of got complacent in my head, you know?” he said. “You have success for six years in the NFL, you always kind of have — I’ve always had something to kind of drive me to be great. ... When you start hearing, ‘Oh, Le’Veon, you’re the best running back in the league,’ it’s not like I stopped working hard, but it’s more like, ‘Damn, I don’t have that edge anymore, that chip.'"

Once the season began, Gase tried too aggressively to get Bell going, and it ended up backfiring. Opposing defenses knew what was coming, and they keyed in on Bell.

So, he became ineffective at times, something Gase insisted he “did a bad job” with throughout the season — and thoroughly intends to correct this year.

“It’s just about getting the ball in his hands and letting him go do things," Gase said. “Letting him make defenders miss, find ways to get him in open space. It’s variety.”

The offensive line didn't necessarily make things easy up front, either, with run blocking an issue as well as protecting Sam Darnold. General manager Joe Douglas overhauled the unit, but Bell won't attribute any of his personal struggles to any of that.

“I’ve been hearing, oh, it’s the O-line, the O-line issues or Coach Gase not giving me the ball,” he said. "Those are all outside things. And I look at myself, like, well, was I really the best that I could be? And I know it wasn’t even close. So, I think this year is going to be a lot different in that aspect just for the fact that I really understand that the past six or seven years, I’ve worked hard and that’s why I’ve been successful.

In May, Bell set a goal for himself to trim down, and used boxing and other intense workouts to do the job. He posted videos and pictures of his progress and says after previously playing at around 222 pounds, he's now in the 210-215-range — something he hasn't been since high school — and his conditioning is off the charts.

“This year, I’m expecting a lot for myself and I’m going to hold myself to a high standard,” Bell said. “And I’m ready to show everybody.”

He's got his sights set on a big-time bounceback, and he's hoping for a 16-game season to put all his offseason work on full display. Bell wants to be one of the main reasons the Jets become winners this season.

Not a reason they failed.

The complacency of previous success has been replaced by intense motivation, a desire Bell has never felt so strong at any point in his career.