Marshawn Mania: Lynch ready to go for Seahawks vs. 49ers 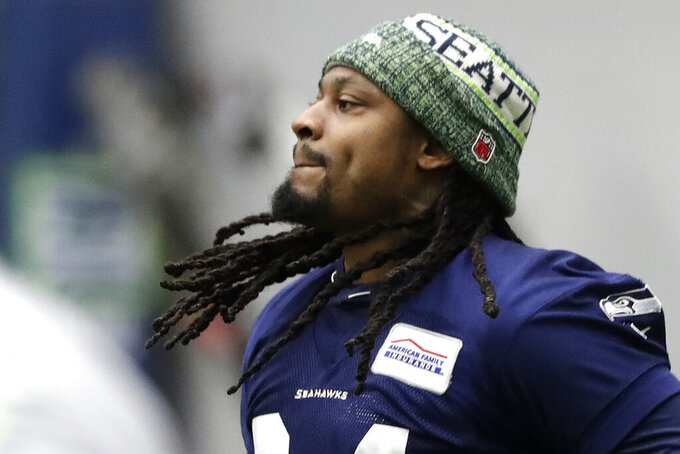 SEATTLE (AP) — Four years after he last went through a full week of preparation with Seattle, it felt downright normal for Pete Carroll to see Marshawn Lynch carrying the ball during practice.

The only question that seems to remain at this point is how much Lynch will carry the running load on Sunday night when the Seahawks face San Francisco for the NFC West title.

“There's no question, it's undeniable, there's an energy about, a juice about him being back here," Carroll said on Friday. “He's just an extraordinary player and character over the years. For this opportunity and to come back at this time with everything going on — Christmas and everything, New Year's around the corner — it's just fitting we were able to figure it out. I'm thrilled by the way he has brought it, and learned, and figured it out, and studied and worked at it to fit in. It's only been an addition coming in and we're fired up for it."

Lynch and fellow running back Robert Turbin concluded their first week back with the Seahawks on Friday. Along with rookie Travis Homer, the trio will handle the running load against the 49ers.

Lynch and Turbin both haven't played since October 2018. But Carroll praised both for their ability to pick up the game plan — without being overloaded by the entire playbook — and show how quickly they could adapt to an offense that has similarities but also significant differences from the last time either was here.

As usual, Carroll wasn't interested in sharing how much either might end up playing against San Francisco.

“It's hard imagine it could be so seamless in terms of their learning and all, but they're veteran guys and they get it," Carroll said. “They did a great job. We felt them in practice and looking forward to those guys participating in this game."

While most of the attention this week has been on Lynch's return, the Seahawks will have two other key players back in defensive end Jadeveon Clowney and cornerback Shaquill Griffin. Both have missed the past two games — Clowney with a core muscle injury and Griffin with a hamstring strain.

“It's huge. It's a huge deal. Our top cover guy, our top rusher, that's a big deal," Carroll said.

NOTES: Carroll said S Quandre Diggs (ankle) has run the past couple of days, but it would still be somewhat “miraculous" for Diggs to be able to play. Diggs suffered a high-ankle sprain in Week 15 against Carolina. ... WR Malik Turner will be out due to a concussion. Turner suffered the injury last Sunday vs. Arizona but didn't report symptoms until after the game, Carroll said. Rookie John Ursua will likely be active to take Turner's place.