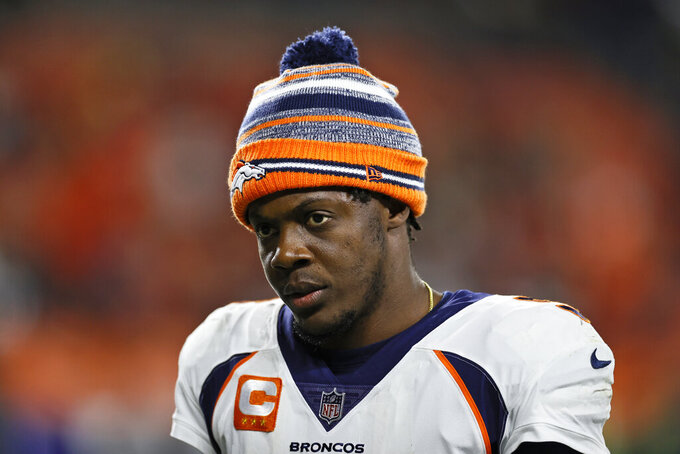 CLEVELAND (AP) — Von Miller's ankle didn't hurt as much as his pride.

The Broncos' surprising start has become a troubling slide.

Miller, who all but guaranteed a Denver win earlier this week, sprained his ankle in the first half and could only watch in the second as the Broncos lost their fourth straight, 17-14 to the banged-up Cleveland Browns on Thursday night.

One of the NFL’s top defensive players, Miller banged his leg into teammate Dre’Mont Jones as he was rushing Browns quarterback Case Keenum with less than two minutes remaining before halftime.

Miller’s leg slammed into Jones and buckled inward. He dropped to one knee and asked for medical assistance. Miller, who missed all of 2020 with an ankle injury, left the field under his own power, walking very gingerly to the sideline.

Afterward, Miller said his ankle “is good” and X-rays were “clean.” He thought he could have played in the second half, but the team's medical staff encouraged him to stay as out as a precaution.

The pain of losing seemed more severe than any injury.

“I talked a lot of (smack) before this game and I made it personal and I wanted the animosity,” Miller said. "I wanted this to be that game. And I wanted to win it. I was going to leave it all out there today.

"I was comfortable with everything I said. I want to continue to make it personal.”

In the buildup to the game, Miller proclaimed he would record multiple sacks, and he jokingly warned he would “kill” any of the tackles Cleveland put in front of him. The 32-year-old Miller couldn't back up his words as the Broncos (3-4) lost again, completely erasing their promising start to 2021.

Broncos coach Vic Fangio would not use Miller's injury or quarterback Teddy Bridgewater playing hurt as reasons for his team's October slide.

“We've got to rally and overcome our injuries,” Fangio said. “Not use them as an excuse. We've got to make it good enough.”

Earlier this week, the Broncos placed starting linebackers Alexander Johnson and Andre Mintze on injured reserve and they're also missing wide receiver Jerry Jeudy (ankle sprain) and linebacker Bradley Chubb (ankle surgery), who is about a month away from returning.

Bridgewater threw a pair of TD passes and gutted it out while playing with foot and quadriceps injuries. He came into the game listed as questionable, but didn't miss a play and finished 23 of 33 for 187 yards with one interception.

“Tough loss today, man,” Bridgeater said. “It sucks. We've got to turn this thing around. We can't wait until the second half. There's definitely a sense of urgency to save the season. We can't look 10 weeks down from now.”

Denver's offense sputtered in the first half, picking up just 76 yards. But Bridgewater led a 13-play, 79-yard scoring drive he capped with an 8-yard TD pass to Melvin Gordon to open the second half that gave the Broncos life.

“We can't take three quarters to get going,” Gordon said.

The Broncos were able to close within 17-14 on Bridgewater's 10-yard pass to Javonte Williams with 5:17 left.

But missing Miller, Denver's defense couldn't stop the Browns, who handed the ball to third-string running back D'Ernest Johnson seven times and he picked up 52 yards while Cleveland ran the clock out.

"The last drive was very frustrating,” Fangio said. “We loaded up against the run and we couldn’t stop them.”

It's not the only thing the Broncos can't stop.