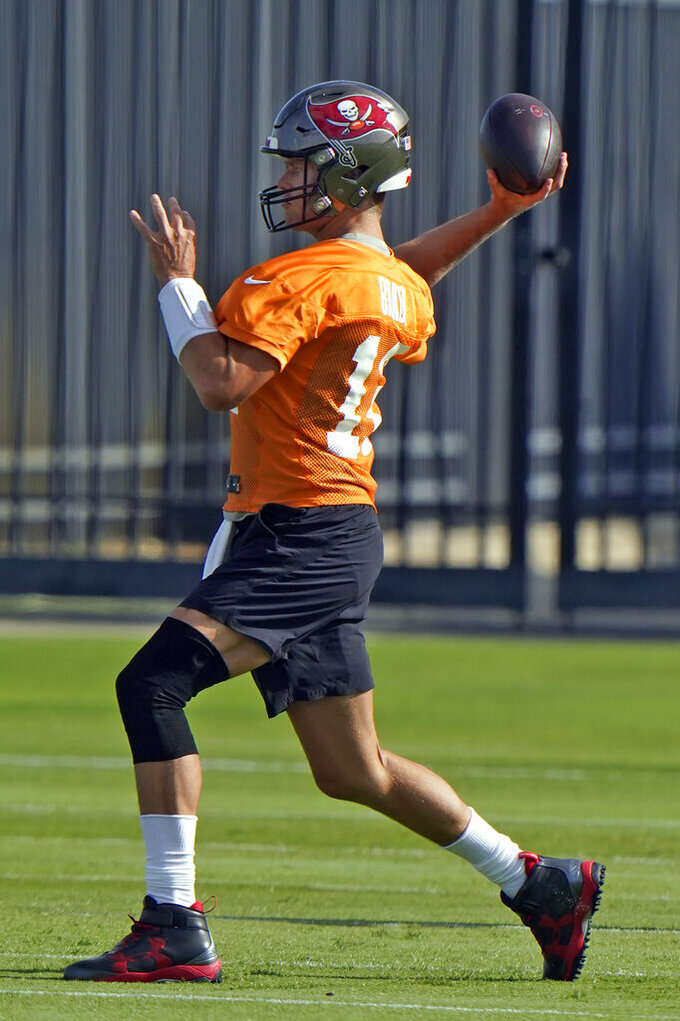 Aaron Rodgers was a no-show and Tom Brady was full-go.

The quarterbacks who faced off in the NFC championship game five months ago dominated headlines as several NFL teams opened mandatory minicamps on Tuesday.

“I think any time you’re talking about any player on your football team, you’d love everybody to be here,” Packers coach Matt LaFleur said. “And so, it’s certainly, it is what it is, man. And we’ll focus and we’ll control and work on the guys that are here and try to help them become the best to their ability and coach the heck out of them.”

LaFleur declined to say whether Rodgers’ absence was excused. The team has the option to fine Rodgers just over $93,000 if he misses all three minicamp practices this week.

“I’m not going to get into my conversations with Aaron and the communication,” LaFleur said. “I’m naturally optimistic, but you know, again, we’ll take it day by day and just do whatever we can to help remedy the situation.”

LaFleur and general manager Brian Gutekunst have both said they want Rodgers back. Gutekunst has said he won’t trade Rodgers, who has three years left on his contract.

Rodgers was noncommittal about his future in an ESPN interview last month but expressed his displeasure with the front office and made it clear his issue with the team wasn’t about quarterback Jordan Love being drafted in the first round last year.

Rodgers won’t need much practice time with the Packers whenever he returns, if he comes back at all.

“I think Aaron’s got a ton of experience and he’s not a guy that I worry about particularly that much,” LaFleur said. “He’s a pro’s pro. I know he knows how to take care of his body and get himself ready to play. So that is not much of a concern for us at all.”

While Rodgers remained absent in Green Bay, Brady was back on the field in Tampa Bay leading the defending Super Bowl champions on his surgically repaired knee.

Brady, who turns 44 in August, called the knee surgery “pretty serious” in a radio interview last month. He wore a brace on his left knee and was held out during blitz situations in practice but Arians said the five-time Super Bowl MVP “kept begging to go back in.”

The Falcons, Cowboys, Lions, Giants, Rams and Washington are also holding their mandatory minicamps this week. The Eagles and Colts reworked their schedules and are off until training camp after finishing OTAs.

For Atlanta, it was the first time the Falcons hit the field since seven-time Pro Bowl wide receiver Julio Jones was traded to Tennessee.

In Dallas, quarterback Dak Prescott hasn’t been limited in his return from a major ankle injury. He’s participated in offseason practices but won’t take part in full-team portions of mandatory minicamp. Coach Mike McCarthy expects Prescott to be fully ready at training camp.

“He’s done everything. He hasn’t missed anything that’s been slated. He’s doing a lot of extra, frankly, so the anticipation would be for him to go every day is the outlook," McCarthy said. “We’re not naïve. It’s just like any player that comes back from injury, especially a major joint injury. The first year back there’s going to be some things you have to work through but I would anticipate we’d start with him in full mode, get him into the team periods and get back to playing football.”

Reigning AP Defensive Rookie of the Year Chase Young was on the field for the start of mandatory minicamp, his first appearance during Washington's offseason program. Young said a series of photo shoots and other opportunities kept him away from voluntary organized team activities but that coaches knew the situation and understood.

“I’m ready to rock,” Young said. “It just felt good being out there with my guys. I felt like a kid in the candy shop.”